The Vertem Futurity Trophy is the final Group 1 of the year in Britain and is held at Doncaster Racecourse in late October.

A race for juveniles over one mile, this is the last of big precursors for the following year’s Classics. Each of the last three winners, Saxon Warrior in 2017, Magna Grecia in 2018 and Kemeko in 2019, have gone on to win the 2000 Guineas at Newmarket.

1m is the trip for this Group 1 contest for the juveniles, with the ground at the track currently described as good to soft. One of the most prestigious two year old events of the season, the race offers £215,000 in total prize money and is a hugely popular race.

The great Sir Henry Cecil sits atop the trainer’s table in this event, with the legendary trainer of Frankel having registered an impressive 10 successes in the race. We do have a man looking to join Cecil on double figures this year though in the shape of, Aidan O’Brien. The master of Ballydoyle sends just the one to post in 2020, with Wembley set to fly the flag for the Irish operation.

Billed as one of the top pointers towards future Classic success, this race has lived up to that billing of late. In the past 10 years Kameko, Magna Grecia and Saxon Warrior have all gone on to win the 2000 Guineas; Camelot won both the 2000 Guineas and the Derby, and Kingston Hill landed the St. Leger.

This has been an excellent contest for the favourite in recent years, with the market leader coming home in front in no fewer than seven of the past 10 editions, handing jolly backers a level stakes profit of +£10.53 over this period. Can the favourite deliver once again this year?

Considering Aidan O’Brien’s formidable record in the race, it is no real surprise to see that it is his sole entry, Wembley, who currently heads the market ahead of this year’s renewal. The fifth product of Galileo and Inca Princess, three of his four siblings have scored at Listed Level or above, with Group 1 winner Johannes Vermeer being the best of his predecessors. On what we have seen to date though, we wouldn’t be at all surprised should this one go on to better the achievements of his talented brothers and sisters.

It did take him four attempts to land his maiden, but he simply seems to have been something of a slow burner and heads into this on the back of successive runners up finishes in Group 1 contests. Held up out the back in the National Stakes at the Curragh, he was travelling much the best with a furlong to travel but had to switch around the whole field in order to obtain a clear run; by which time Thunder Moon had shot clear up the far rail and wasn’t for catching.

It was a similar story last time out in the Dewhurst Stakes at Newmarket when finding himself with around four lengths to make up as the race began in earnest, in the end he managed to reel in all bar stablemate St. Mark’s Basilica to go down by just ¾l at the line. Both of those efforts represent rock solid form at this level, and any further improvement may make him tough to beat, with 2/1 seeming a fair price considering what few doubts there are.

Ballydoyle’s major rivals Godolphin have landed this prize twice in the past through the Saeed bin Suroor-trained duo of Medaaly and Ibn Kaldoun. With the most recent of those successes having come in 2007 though, the barren spell in the race is beginning to stretch out just a little for the boys in blue. Bidding to change all that in 2020 is the Charlie Appleby-trained One Ruler and he certainly has an excellent chance.

A strapping sort by the outstanding sire Dubawi, this one is yet to finish outside of the first three in four career starts and looks to be progressing with every run. Making all to land his maiden at the second attempt at Sandown, things then didn’t quite go his way in a Listed event at Doncaster which seemed to turn into something of a sprint close home.

Stepped up into Group 3 company, and up to a mile at Newmarket last time out, he proceeded to produce his best effort yet, to power home by 1¾l from what looked a decent field on paper. Things did pan out for him better than those who finished in behind that day, but he still impressed with his change of gear and, having not looked fully extended at the line, he may well be up to this further step up in class.

King Vega is another for the shortlist, and looks likely to be suited by this step up in trip. The form of his second to Etonian last time out has taken a bit of a hit though, and a better value each way option may be the Jim Bolger-trained Mac Swiney at huge each way odds.

This one has something of an overload of Galileo in his pedigree, being by New Approach and out of a Teofilo mare, and has reportedly already been identified by his expert handler as a possible contender for next season’s Derby. His maiden success at the Curragh back in July certainly seems to be working out well, with the horse to finish second to him that day being none other than the favourite for this race, Wembley.

The fact that he is such a big price here is no doubt down to the fact that he has been far from consistent in his three efforts since that Curragh success. However, he does still arrive as a Group 2 winner having beaten Cadillac and the Autumn Stakes runner up, Van Gogh in the Futurity Stakes. Only eighth in the National Stakes last time out, we would be inclined to forgive that performance in what was a very messy race. Looking all about stamina, he will likely need further than this in time, but can still be fancied to be staying on as well as anything late in the piece, especially with some give under foot.

*Race took place at Newcastle on an all-weather surface.

About the Vertem Futurity Trophy

For those of you wondering what happened to Doncaster’s Racing Post Trophy, there’s no need to fear. The final Group 1 contest of the flat season remains alive and kicking, merely under a different title: the Vertem Futurity Trophy. The 2017 name change marked the end of a 28 year sponsorship deal with the Racing Post but it’s still very much the same race that has excited Doncaster for decades.

For the two-year-old horses that compete in this one mile race, this is their last moment in the spotlight before the main season draws to a close. Group 1 status and a rich jackpot attracts a high calibre selection of colts, many of which are worth keeping your eye on the following season. Fillies are eligible to compete alongside the boys but incredibly rarely is this the case despite their three pound allowance.

DERBY RECORD A MIXED ONE

Vertem Futurity winners often find themselves featuring in the Epsom Derby, around seventh months after their Doncaster triumph. Since 1980, five winners of this Group 1 race have successfully gone on to secure glory in the English Classic. Although an average of around one double champion every six and a half years is not an overwhelmingly strong trend, it’s certainly one worthy of closer inspection. Recent years paint a mixed picture and also shows that it’s not unusual for Vertem Futruity winners to avoid Epsom’s high-profile contest all together. 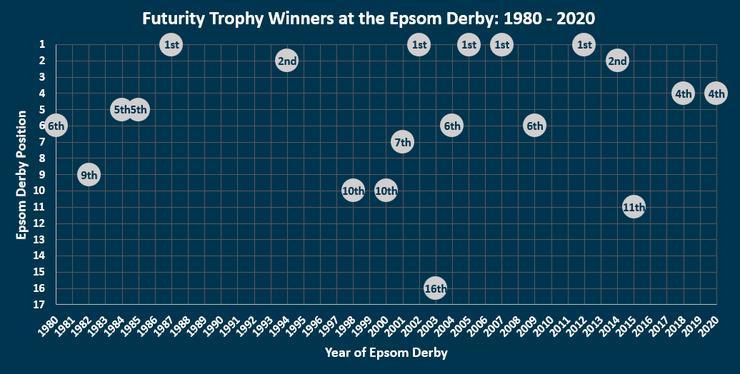 Prior to the 2015 renewal of this race, favourites had secured victory for six years running, with the largest priced winner in this time Kingston Hill at 7/2. Having not competed above Class 4 previously, few fancied Marcel to break the favourites’ dominance but the much unfancied horse did just that. Setting off at 33/1, the bay colt sat rock bottom of the betting but finished strongly to hold off Johannes Vermeer in second place. The shock result remains the only recent exception to the rule however with two favourites and one second favourite winning since. Not the most profitable race for the punters but an often easy one to call at least. 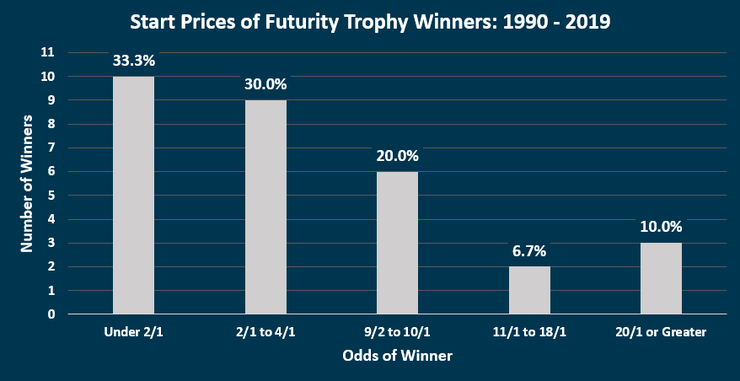 Sir Henry Cecil was not lacking in major victories during a truly sensational career. Widely regarded as one of the all-time greats, the Scottish born trainer saddled the winner in 25 domestic Classics. While you’ll struggle to find a major event he did not win, there is no Group 1 contest he enjoyed more success in than the Vertem Futurity Stakes. 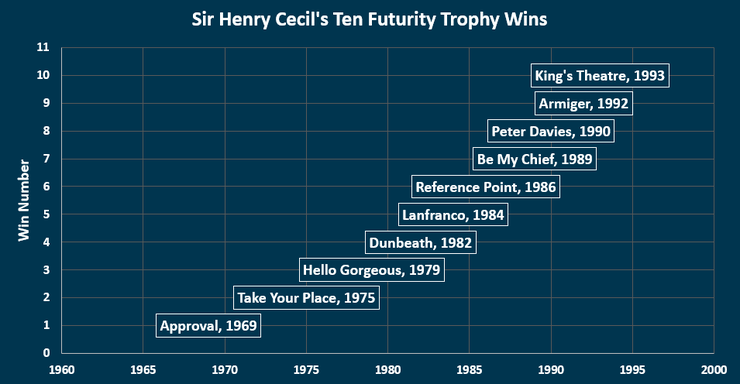 Known as the Observer Gold Cup when first claiming victory in 1969, the 11-time Champion Trainer won a further nine renewals between 1975 and 1993. As superb as this record is, it’s one placed under real threat by Aidan O’Brien who now stands merely one victory away from hitting double digits.

Standing joint top as the leading jockeys for this race are none other than Lester Piggott and Pat Eddery who both won on five occasions during their trophy-laden careers. Their position on top is under real threat now however thanks to Andrea Atzeni’s superb run of results in this race. Starting in 2013, the Sardinia-born jockey strung together four consecutive winners in this event, all coming for different trainers. With no other jockey even able to string three wins in a row since its 1961 inception, the Italian’s run, in what is his most successful Group 1 race, will surely stay unmatched. 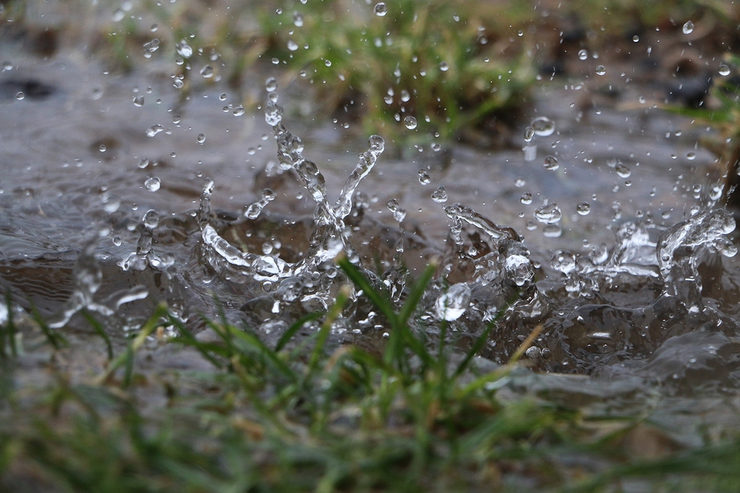 Taking place in the British autumn time, it’s not too surprising that this race has occasionally fallen foul of the weather. It hasn’t happened all that often in truth, with Newcastle stepping in in 1989, and Newbury in 2006, but 2019 saw something of a first for one of the biggest juvenile Group 1 events of the season.

It wasn’t the fact that the severe deluge which hit Town Moor in the lead up to the race ultimately led to its abandonment which was unique, but rather the venue which was selected to host the rescheduled edition on the following Friday.

Since its inaugural running back in 1961, the first 58 editions of the contest had been held on turf, but it was the artificial Tapeta surface at Newcastle’s all-weather track which was to provide the platform in 2019. A fairly significant event both for the track and all-weather racing in general, as November 1st 2019 will now go down as the date of the first ever Group 1 race to be held on an artificial surface in the UK.

The race itself was also a fairly memorable affair. The switch in venue certainly did not detract from the quality of the entry, with the Ballydoyle battalion rocking up at Gosforth. In the end though they – and everything else – were repelled in fairly scintillating style by Andrew Balding’s Kameko who scorched clear for an impressive 3¼l success to etch his name into the history books.