There’s always plenty of demand in terms of entries for the Unibet Golden Mile, formerly known as the Betfred Mile, which is open to horses three and above. A maximum of 20 runners are allowed to feature at Goodwood for this event though the number of entries often far exceeds this.

Ryan Moore rode a hat-trick of wins in this race between 2016 and and 2018, for three different trainers. Other notable winning jockeys include Hayley Turner, Frankie Dettori and Kevin Darley.

It is a trip of a mile, unsurprisingly given the name of the race, for one of the biggest handicaps at the Glorious Goodwood Festival. The race offers total prize money of £50,000 this year, with the going at the track currently described as good.

It never hurts to have a trend or two in evidence in these big field handicaps, and we do look to have a fairly strong one concerning the draw here. With nine of the past 10 winners having emerged from a single figure stall, it would seem that those with high draws may be up against it.

With two wins in the past 10 years, it is Mark Johnston who boasts the best recent record of the trainers on show this year. Having already struck in the handicaps this week, the Middleham handler will likely have high hopes of improving that record still further. Johnston sends Blown By Wind, Cardsharp and Vale Of Kent into battle this time around.

There have been only two winning favourites or joint favourites in this event in the past decade, handing supporters of the market leader a level stakes loss of £4.50. However, with only two winners returning an SP of bigger than 12/1 over this period, complete shock results have been relatively rare.

It is difficult to determine who will start as favourite in what is a wide-open year, but one of those currently vying for the market lead is the William Haggas-trained Montatham. Racing fans will already be becoming pretty familiar with the sight of Jim Crowley steering one to victory in the famous Hamdan Al Maktoum colours this season, and this one may well add to what has been an excellent season for the rider and owner combination.

Despite enjoying a fairly productive three year old campaign, it was nevertheless deemed that a gelding operation was in order for this son of Showcasing to be seen to best effect, and so far that decision seems to be bearing fruit. Three lengths too good for the field on his seasonal return at Newmarket, he then ran a stormer in the Royal Hunt Cup to only be mown down late by Dark Vision, who benefitted from making his run up the favoured near side. Raised three pounds on the back of that, he made his way back into the winners enclosure at Sandown – this time withstanding the late thrust of Dark Vision – and gets in off a four pound higher mark here. Rock solid in this type of event, he isn’t handicapped out of it by any means but has drawn the coffin box in stall 15.

Also proving popular with punters is this recent recruit to the David O’Meara operation. Based in North Yorkshire, O’Meara has forged a considerable reputation in improving runners from other yards, and already seems to be working his magic with this son of strong speed influence, Bated Breath.

This four year old gelding certainly hadn’t run poorly when with former trainer Olly Murphy – finishing in the first three in each of his four starts for the handler – but since heading north he is unbeaten in two, and looks set to be in for a rise in excess of the three pound penalty he has to shoulder here. As such, he looks to be at least a couple of pounds well in on the book, and can go well under Harry Bentley. The one real question mark about this one concerns the trip, as his two recent wins have both come over seven furlongs. That said, he certainly didn’t seem to be stopping at the end of either contest, and benefits from a favourable draw in stall two.

Another must for the shortlist is the William Knight-trained Sir Busker who, much like Montatham and Prompting, heads into the race right at the top of his game. The success which this son of Sir Prancealot has tasted so far this season should come as no real surprise, as he did look a horse firmly on the rise during his three year old campaign – progressing from an opening mark of 79 to close the season on 92.

This season his rate of progression has been even steeper. Having taken nine runs to improve by 13lbs last year, he has already risen 15lbs in the handicap following only three starts in the current campaign, and he may not be done improving yet. A comeback success over Dark Vision looked solid at the time, and has been firmly franked since, whilst he then looked to win with a bit up his sleeve in getting up late to land the Silver Royal Hunt Cup. Losing little in defeat when not quite getting there over seven furlongs in the Bunbury Cup last time out, he returns to a trip at which he boasts career form figures of 1611 and looks primed to run a big race from stall seven.

About the Golden Mile: A Late Summer Handicap Highlight

Goodwood racecourse is one of the few racetracks whose name will likely be familiar even to those with only a slight passing interest in the sport. The main reason for this is undoubtedly the hugely popular Glorious Goodwood Festival which takes place in late July/early August each year.

Group class contests such as the Goodwood Cup and Sussex Stakes may be the most high profile events of the week, but there’s also plenty of excellent action on the undercard, including a host of quality handicaps.

One such event is the Class 2 Golden Mile which is held on the penultimate day of the meeting. Taking place over a trip of – you guessed it – one mile, the race made its debut in 1987 under the sponsorship of drinks company, Schweppes. A number of sponsors have come and gone since that inaugural edition, including William Hill, totesport and Betfred, with fellow gambling firm Unibet taking over in 2018.

Limited to a maximum field of 20, the event is oversubscribed more often than not, with the £150,000 (as of 2019) in total prize money helping to attract a quality and competitive field.

Johnston On The Mark

As competitive as this handicap affair is, there are a handful of trainers who have managed to register multiple successes in the race. As we can see from the table above, this list includes some of the biggest names in the game over the past 30 years or so.

Standing above all the others though is the man who in 2018 took the record for the highest number of career wins recorded by any British trainer… ever. Included amongst Middleham handler Mark Johnston’s 4000+ career victories are five in this race, including three in the space of four years between 2009 and 2012.

No jockey has managed to quite match the exploits of Mark Johnston in this race, with three being the leading total posted by the riders as of 2019. The now retired trio of Jimmy Fortune, Michael Hills and Kevin Darley all sit on two wins, but it is one of the greatest riders of the modern era who sits atop the pile.

Headed into the 2016 renewal of the race, Ryan Moore had hit the frame here on a couple of occasions without entering the winner’s enclosure. However three wins in succession aboard Franklin D (2016), Master The World (2017) and Seniority (2018) moved Moore into the all-time lead. 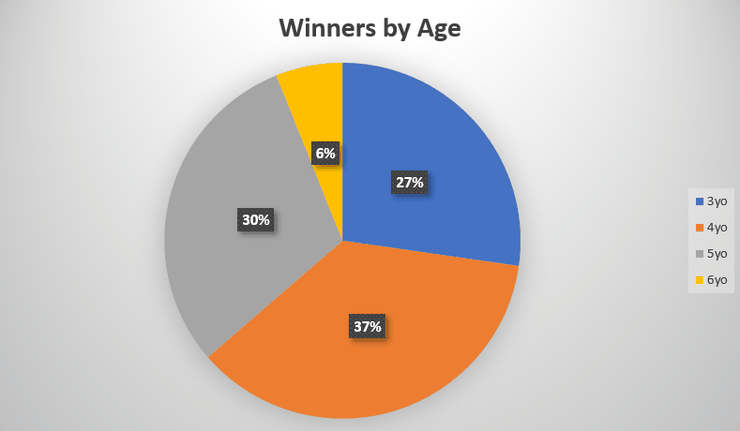 There isn’t too much of an age trend in evidence here. Whilst the four year olds do boast the best record, the three and five year olds are more than holding their own to date. It does however seem tough for the older performers to master their younger rivals, with Unshakeable (2005) and Master The World (2017) being the only two runners aged six or older to land the prize as of 2019.