The Marsh Novices Chase, formerly the JLT Novices’ Chase, is one of the newer races at the Cheltenham Festival. The Day 3 opener has been dominated by the Irish since its inaugural running in 2011, our friends from the Emerald Isle winning all but two of the editions to date.

Registered as the Golden Millar Novices’ Chase, this race is named in honour of the legendary chaser who won five consecutive Cheltenham Gold Cups in the 1930’s along with a Grand National victory which came in 1934.

The next race is scheduled to run on 18th March 2021. The race info, trends and tips shown below will be updated for the next renewal once the final declarations have been made.

2m4f is the trip for this Grade 1 chase affair which offers an excellent £150,000 in guaranteed prize money. The ground at the track is currently described as soft, with a relatively dry forecast in the lead up to the race. The penultimate day of the Festival has come round so quickly as ever but we have a really exciting contest to get us started here on St Patrick’s Thursday.

One of the newest additions to the Cheltenham Festival offering having only been with us since 2011, this race has been dominated by the Irish in its early years. Of the nine editions to have been run to date, seven have fallen to an Ireland-based trainer, with Willie Mullins being responsible for four of those successes. Mullins saddles exactly one-third of the field in 2020, with his four-pronged attack being spearheaded by the hugely popular 12 year old, Faugheen.

If the mighty Faugheen is to prevail here, he is going to need to defy a pretty strong age trend, with every running of the race to date having been landed by either a six or a seven year old. Eight of this year’s 12 runners fall into that age bracket but more importantly there will be many who feel 12 is just too old for The Machine to do the business against a field of this calibre.

In the old timer’s favour is the fact that previous experience at this meeting has also proven to be a major positive in this event, with all nine of the winners to date having a previous festival outing to their name. Faugheen has won at the Cheltenham Festival twice before, can he complete a crowd-pleasing hat-trick here?

The best of the six year olds in this year’s field would look to be the Olly Murphy-trained, Itchy Feet. Always likely to hold a special place in Murphy’s heart thanks to handing the trainer his first ever Grade 1 success, he may well trump even that by giving Murphy a first Cheltenham Festival success – provided he hasn’t already picked one up on the opening two days of course.

Not the most attractively bred runner in the field by any means, that hasn’t stopped this one racking up a seriously impressive sequence of results. A smart hurdler, he ticks the box of having previous Cheltenham Festival experience having finished an admirable third in last season’s Supreme Novices’ Hurdle; and has already made quite an impression over the larger obstacles.

A perfect two from two over fences heading into this, he travelled like a dream in the Scilly Isle Novices’ Chase at Sandown last time out before putting the race to bed with the minimum of fuss. That effort was right up there with the best Novice Chase performances we have seen this season and, with further improvement likely, he gets our vote here, with 7/2 a price we don’t feel will last too long.

No doubting who the most popular winner of this would be, with the Willie Mullins-trained 12 year old Faugheen likely to bring the house down should he come home in front, and he just might do it too.

His current chase mark of 158 makes him officially the best horse in the field, and with two Grade 1 wins to his name already – including a 10-length thrashing of Samcro two starts back – he looks set to run a mighty race and might just have one final hurrah in him.

This Rich Ricci-owned runner also scores highly when it comes to previous Festival form, as said, having announced himself on the big stage with a win in the 2014 Ballymore, before landing the Champion Hurdle itself in 2015. Much the most talented of these when at his peak, the fire still seems to burn brightly despite his advancing years, and he looks sure to run a big race. If we were betting with our heart, he would be the horse to carry our cash and he certainly has every chance of being involved at the finish.

Nicky Henderson’s Champion Hurdle win with Epatante on the opening day put him out in front as the most successful trainer in the history of the Cheltenham Festival. A mighty achievement, but this race has not contributed to Henderson’s impressive stats, with the runner up finishes of Terrefort and Top Notch being as close as he has come to saddling the winner.

Bidding to break Henderson’s duck this year is the six year old, Mister Fisher. In common with Itchy Feet, this one also ran in the Supreme here last season - when slightly disappointing back in eighth position.

He does however look to be potentially a significantly better performer over the larger obstacles, with his excellent jumping always likely to stand him in good stead. Already a winner over this course and distance this season, and fairly impressive in Grade 2 company last time out, he looks likely to be involved at the business end in what may be a very close race.

Gordon Elliott saddled the mare Shattered Love to land this prize in 2018, and this year relies upon one of the most highly touted horses to emerge from his County Meath yard in recent seasons. Samcro has always come with the tallest of reputations, and in fairness to the horse he certainly delivered at the track in the early days – winning each of his first eight racecourse appearances, including when landing a major gamble in the Ballymore Novices’ Hurdle here in 2018. However, he hasn’t really been anything like the same horse since and nobody quite seems sure why.

Sent chasing this season, he made an encouraging start when easily beating inferior opposition at Down Royal, before coming down when seemingly travelling well in the Grade 1 Drinmore Novices’ Chase at Fairyhouse. His second last time out at Limerick entitles him to take his place in this line-up but does leave him with 10-lengths to find with the veteran, Faugheen. A recent wind operation may bring about some improvement, but it will need to and in truth we’re not convinced we’ll ever see the “real” Samcro again.

About the Marsh Novices’ Chase: The Day 3 Opener 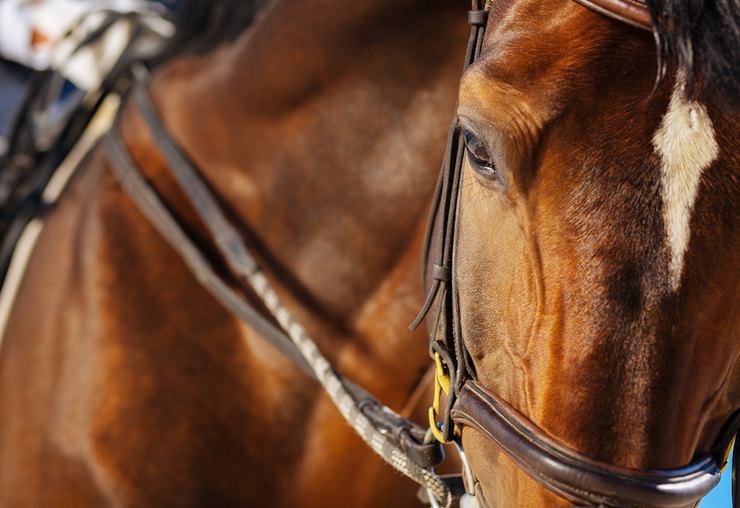 Leading horses will often have multiple different options going into the Cheltenham Festival. That is most certainly the case with novice chasers who are often entered into a couple of the big novices’ races including the RSA Novices’ Chase and the Marsh Novices’ Chase.

The most obvious difference between the two races is the distance. At two miles and four furlongs the Marsh Novices’ Chase is around half a mile shorter and it has four fewer fences with a total of 16. The Marsh Chase is a considerably younger race having been introduced to the Festival in 2011. Those factors combined mean that the Marsh Novices’ Chase isn’t held in quite the same regard as the RSA Chase but don’t think for a second that this is unimportant.

Like many major horse races, the Marsh Novices’ Chase has had a number of changes in title due to sponsorship, although the race is officially registered as the Golden Miller Novices’ Chase.

Connections of Samcro won £84,405 when he won the 2020 renewal. That a race which is less than 10 years old can have such a sizeable prize pot is no mean feat and shows that the Marsh Novices’ Chase is a popular contest, as does the fact that it was promoted from Grade 2 to Grade 1 level for the 2014 renewal. 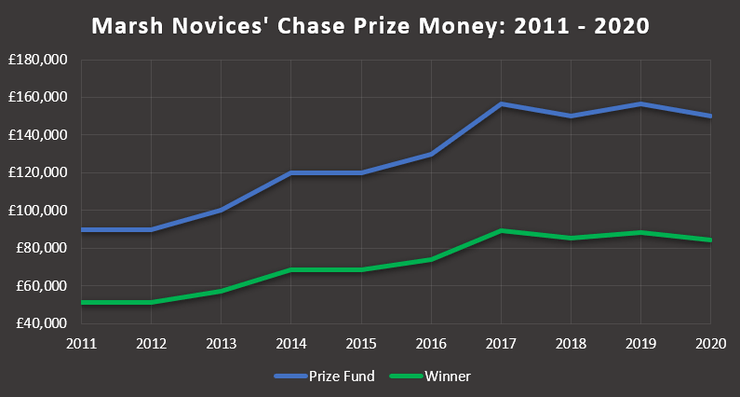 Another way of ascertaining the quality of a race is by looking at the list of previous winners. Some high calibre types have claimed the race including Sir Des Champs and Vautour but the most impressive list is that of the winning trainers. Willie Mullins has more wins in the biggest Cheltenham races than most and he wasted little time getting off the mark in the Marsh Novices’ Chase, training Sir Des Champs to victory in the second edition.

Mullins then went on to secure an impressive hat-trick of successive wins from 2015 to 2017 in between wins for other top drawer trainers, Jonjo O’Neill and Gordon Elliott. Similarly, some of the most successful National Hunt jockeys of recent times including Davy Russell, Ruby Walsh and Tony McCoy have ridden the winner of the Marsh Novices’ Chase.

Named After A Great

When you look through the records of those big names you may not immediately see the Marsh Novices’ Chase in their list of wins. That’s because the race is officially registered as the Golden Miller Novices’ Chase in honour of a true legend of the Cheltenham Festival. Among Golden Miller’s achievements include being the most successful Cheltenham Gold Cup horse in history (winning it five times!) and being the only horse to win both the Gold Cup and the Grand National in the same year (1934).

We won’t see the likes of Golden Miller again but future winners of the Marsh Novices’ Chase will doubtless go on to big things. Vautour, arguably the most impressive winner of the race, went on to win the Ryanair Chase the following year which is often a target. The Cheltenham Gold Cup is also sometimes a target (Sir Des Champs finished second in 2013) but the form doesn’t always hold up as Yorkhill struggled badly in the season following his Marsh Chase win. Shattered Love, who won this race in 2018, finished 9th and last of the finishers in the 2019 Gold Cup.