The Goodwood Cup is one of the most prestigious long-distance flat races on the British racing calendar. It is the showpiece event of Glorious Goodwood’s opening day, the festival which treats us to five consecutive days of top-class summer racing.

This was first run over 200 years ago in 1812 as a three mile contest. Now run over just two miles, this is still the second longest Group 1 in the country, behind only the 2½ mile Ascot Gold Cup. These two make up the first legs of the Stayers’ Triple Crown, followed by the Doncaster Cup in September.

Having become the first three year old to take this in 27 years when successful in 2017, Stradivarius followed up with victories in 2018 and 2019 to become only the second three-time winner of the Goodwood Cup, and the first to do so in consecutive years.

In a Flat racing season like no other, with races being shunted around the schedule and being held at different courses to their usual venues, it is great to see Glorious Goodwood in its usual time and place. The Goodwood Cup is also in its familiar role as the feature race of day one at the Goodwood Festival. This Group 1 race for stayers has been won by Stradivarius in each of the last three years and John Gosden’s superstar is back for a crack at history by becoming the first four-time winner of the Goodwood Cup.

Perhaps the most interesting line for the 2020 Goodwood Cup is whether or not Santiago will be able to make the most of the weight allowance for three year olds to throw down a serious challenge to Stradivarius. Aidan O’Brien’s colt is improving all the time but he will have to do something very special in becoming just the third three year old winner of the race in 20 years after Lucky Moon in 1990 and Stradivarius in 2017.

Santiago does tick some of the boxes in terms of the big race trends though. He has had a run inside the last 40 days, is inside the top three in the betting and has previous Group 1 winning form. In short, any winner of the Goodwood Cup has to already have proven themselves to be a top class stayer before their trip to West Sussex.

When Stradivarius was edged out by a nose by Kew Gardens in the British Champions Long Distance Cup some wondered whether that would mark the beginning of the decline of a horse who had dominated the staying division for two years. Those concerns have been well and truly put to bed this season. After running with real credit and showing impressive pace over 1m4f in the Coronation Cup at Newmarket, Stradivarius returned to winning ways with a 10-length success in the Ascot Gold Cup.

John Gosden and Frankie Dettori have partnered with some excellent horses over the years but even they continue to be amazed by what Stradivarius is capable of. They are convinced that he is right back at the top of his powers, something which is backed up by the official ratings which suggest that he is improving even as a six year old.

Although he will go down in history as one of the best stayers of all time (many believe him to be the best stayer since Yeats who won the 2006 and 2008 Goodwood Cup) Stradivarius is actually an incredibly versatile horse. He certainly has more out and out pace than his competitors on Tuesday whilst retaining the stamina required to win at two miles and longer.

As with any established star, Stradivarius will have to hold off the challenge of some improving younger horses at Goodwood and for the remainder of the season. His experience, and that of Dettori on board, should ensure that he justifies his odds and makes another piece of history.

As mentioned above, those who like to take on odds-on favourites will be predominantly hanging their hats on the chances of Santiago. It is always interesting when an improving younger horse is given the opportunity to run in a race of this calibre and the team at Ballydoyle clearly think very highly of him. Winning this, however, would require a significant amount of improvement.

It has looked for some time as though the St Leger would be the main target for Santiago this season. He is a big, powerful horse who is readymade for courses like Doncaster which favour galloping types. It is much tougher to win with that style of running at Goodwood though even if he has shown a real turn of pace already in the early stages of his career.

He is a winner at Group 1 level having run as well as expected in the Irish Derby last month. Say what you want about the quality of the field that day at the Curragh but he did exactly what was expected of him despite the drop back down in trip. The Goodwood Cup trip will bring even more out of Santiago but the price of 5/2 is too short given the horse he has to beat.

There’s a fairly small field for the 2020 Goodwood Cup which means that each way bets only pay out on the first two home. However, there is still scope for a nice return from an each way play on Spanish Mission at 18/1.

The four year old was always going to find it hard to win on his first run of the season given that most other horses from David Simcock’s yard needed a run under their belts before reaching their best. Given that he was coming off a break of 129 days the fact he threw down the main challenge to Dashing Willoughby in the Coral Henry II Stakes was eye catching. If he is to improve from that run as is expected then Spanish Mission could well finish up the best of the rest even if catching Stradivarius is beyond him.

About the Goodwood Cup 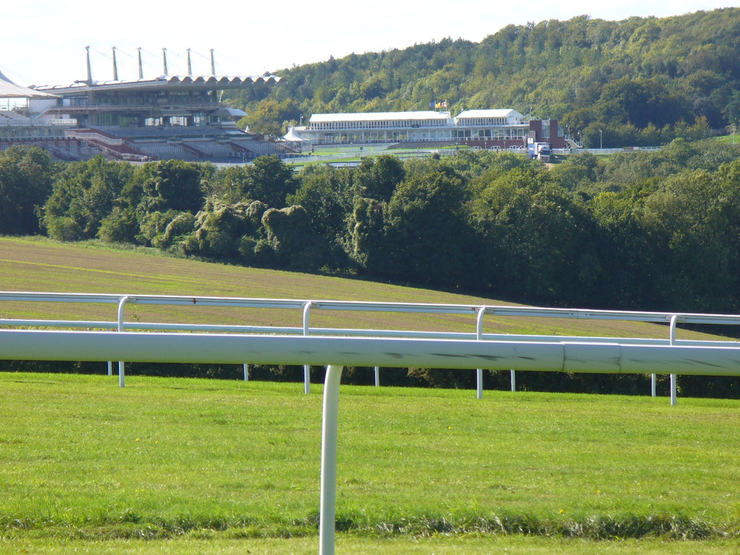 There are several big meetings over the summer for both ardent and casual racing fans to enjoy and few are bigger than Glorious Goodwood. Headlining the opening day of the incredibly well-attended festival is the Goodwood Cup. A leading race for stayers, the contest puts horses to the test over a distance of two miles. Plenty of endurance is needed for the trip, even if the contest is far shorter than it used to be.

When originally created in 1812, the Goodwood Cup was a gruelling three-mile test but over the years the distance has gradually decreased, most recently in 1991. Much like its length, the grading of the test has also undergone several changes. It started off with Group 2 status under the present system of race grading but was demoted in 1985. A decade later it reclaimed its former classification before enjoying promotion to Group 1 in 2017 with a £200,000 purse increase to boot.

Three-year-olds are rarely up to the demands of the trip but in order to help them along, they are saddled with 15 pounds less than their older rivals. If they happen to be a filly as well then there’s an additional three pound allowance. Female horses have tended to steer clear of the test but we did see a winning mare, Allegretto, in 2007.

Given that the focus is on stamina than speed for this race, growing a bit older isn’t much of a hindrance for most horses. The ability to stay competitive in this race at an older age has seen many Goodwood Cup winners return in an attempt to defend their crown. Recent champion Stradivarius won the race three years running between 2017 and 2019. Another recent winner, Big Orange, won the race back to back, while the likes of Persian Punch (2001, 2003) and Yeats (2006, 2008) stuck gold with a year in between. Since 1974, we’ve seen eight horses win this race more than once so former victors ought to be taken seriously. 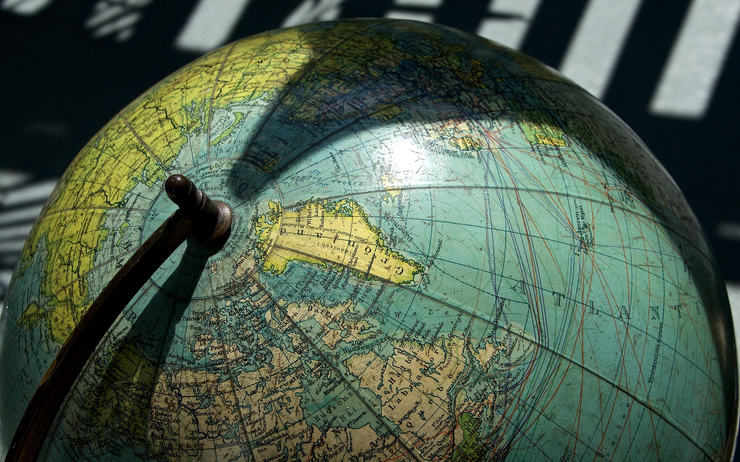 Back in the day, the Goodwood Cup enjoyed widespread international appeal with trainers worldwide trying their luck in the long distance event. In the 19th century winners included French representatives such as Jouvence, Monarque and Flageolet, the American bred, Starke and the undefeated Hungarian filly Kincsem to name a few. The diversity is not quite what is was with British and Irish horses dominating but still the odd foreigner pops up now and again. In 2009, the German bred Schiaparelli was first past the post while two French horses managed to place during the 2012 edition of the race.

DOUBLE TRIGGER MAKES IT A TRIPLE

Although Mark Johnston declared that Attraction is the horse he is most proud of, it is hard to think that Double Trigger wouldn’t feature very high up the list. Honoured in the form of a bronze statue at Doncaster Racecourse, the specialist stayer won 12 Group races during an immensely successful career. A quarter of these victories came in the Goodwood Cup as he became the first horse ever to win this race on three occasions. He perhaps could have made it four but in 1996 a hoof injury ruled the then five-year-old out of action.

There’s been a definite shift towards older horses in this race over the past couple of decades. Between 1964 and 1997 not a single winner was aged older than six years old but this is a trend that had not continued. Since then we’ve seen six horses aged seven and above secure Goodwood Cup glory, Persian Punch being the oldest of the lot when winning as a 10-year-old in 2003. While his victory remains as an anomaly, it is an example of how age appears to be of little significance any more in this Group 1 contest. This does apply to the other end of the scale too though as Stradivarius ended a 27 year wait for a three-year-old winner in 2017. 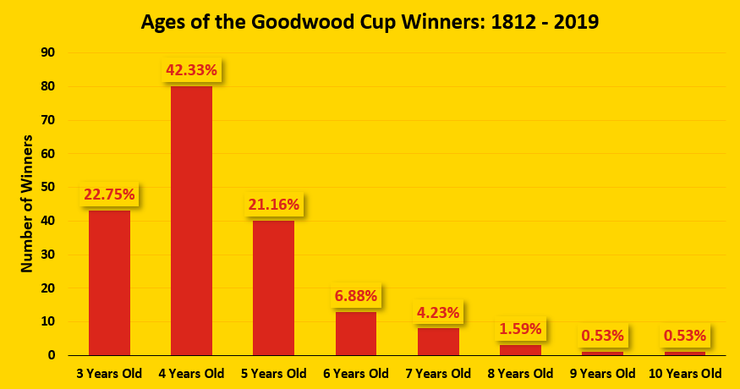