Fans of Aintree’s big Grand National fences are in for a real treat here, as the Merseyside venue lays on not one, but two cracking chase contests over the most famous obstacles in the world. Hot on the heels of the Becher Chase comes this event, the Grand Sefton Chase, which draws the curtain on an excellent seven race card.

The Grand Sefton was first run in 1865 but the race was discontinued after 1965 at a time when Aintree’s popularity was declining and the track was sold to a property developer. In 2003, with racing at Aintree is as popular as ever, the Grand Sefton was brought back into the racing calendar.

There will be plenty in with chances in an often competitive renewal but for us, previous form over the fences trumps all else in this race.

The next race is scheduled to run on 5th December 2020. The race info, trends and tips shown below will be updated for the next renewal once the final declarations have been made.

Jumps racing returns to the Grand National course at Aintree on Saturday and we have a great day of racing ahead. The Grand Sefton Chase is one of the few contests that takes in the fences made famous by the biggest steeplechase of all so each of those in the field for this 2m5f handicap will face a thorough examination of their jumping.

The soft ground forecasted for Saturday will also make this a tough test of stamina so the winner will very much deserve the £50,000 prize awarded to winning connections. There are a number of horses in with a chance and here we take a look at the key contenders.

Note: The following tips are from 2019. Tips for the next renewal will be added once the final declarations have been made.

Every race that takes place over the Grand National fences is incredibly demanding and invariably a tough betting puzzle to crack. The Grand Sefton Chase is no exception. It takes a certain amount of experience on behalf of both horses and jockeys in order to win this handicap, with the majority of recent winners having had a previous taste of racing at Aintree.

Further complicating things is that the Grand Sefton is always a very competitive race. The 2019 renewal is some way short of the maximum field size of 30 but many of those set to head to post do so with a realistic chance of winning.

The competitive nature of the race makes it a real challenge for punters. The last decade has produced only three winning favourites with the average starting price of winners in that time just under 10/1. The rewards are there if you call things right but that isn’t easy and generally speaking we feel each way is the way to play things.

The importance of experience in a general sense must also be remembered. It is foolhardy to bet on any horse without a couple of wins over fences to their name already whilst younger horses have a fairly poor record. Finally, this is a tough 2m5f. So tough in fact that it has been used by some trainers as part of their horse’s preparations for the Grand National itself.

Connections of a few of the horses in the field for the Grand Sefton Chase will have half an eye on the Grand National. It could be slightly different for Colin Tizzard when it comes to Ultragold though. The 11-year-old has already had a crack at the Grand National, finishing in 14th last year.

He’s also very well versed with the Grand Sefton having finished inside the top three in each of the last two years. However, Ultragold’s connections may just have come to the conclusions that his best strengths do not lie over the out-and-out staying trips.

Ultragold is a highly experienced campaigner with eight chase wins to his name. Hopes are high that he still has what it takes to land a big handicap despite his advancing years but there were concerns after he was pulled up last time out in the Sodexo Gold Cup at the start of November. He just wasn’t able to be competitive over 3m that day so keeping him running around the 2 ½ mile mark may be just the thing to get the best out of this hardy sort.

He certainly ticks the boxes for the Grand Sefton. The main issue with the market leader is that he has not been missed by the bookies and the odds of 6/1 that you’ll find about his chances do look a little on the skinny side. Many will find they are not put off by that price though, so expect a lot of support for Ultragold as we get closer to the off.

Killaro Boy will be making his second appearance of the season on Saturday. Just like his run in the Grand Sefton, his seasonal reappearance came at Aintree. He didn’t have the longest break having last been seen at the end of June, but should still be entitled to come on for the run. That is very encouraging for anybody already on board at 12/1 as his run in October was very impressive.

It took a horse who was very generously treated by the handicapper to get the better of Henry Oliver’s 10-year-old over 3m1f on the Mildmay Course, where his jumping was more than impressive enough to suggest he’ll cope with the Grand National fences.

The drop down in trip should also suit Killaro Boy well. He may lack the class of some of his opponents but that is by no means a major problem given this is such a competitive race so he must be considered incredibly good each way value. At the prices he’s the one for us and we certainly think winning this isn’t beyond him.

Punters who are looking for a long shot to hang their hat on for the Grand Sefton Chase should consider the 33/1 available about Federici’s chances. The 10-year-old rather saw his form tail off at the end of last season but, as ever with a horse used to competing in some tough handicaps, the positive side of that is that his mark has come down. Indeed, Federici is back at an official rating of 124, the mark he was at when he last won.

Federici’s win then came over 2m5½f so he’ll have no problem with the trip on Saturday. He shouldn’t have too many problems with the fences either as he has twice finished inside the top five in the Becher Chase which also takes place on the Grand National course.

Preparing Federici for the Grand Sefton on his first run since April will demand an excellent feat of training from Donald McCain but the legendary trainer can certainly manage that. Moreover, he wouldn’t be sending Federici to Aintree were he not ready so he’s worth considering for a small stakes play.

About the Grand Sefton Chase: Back Over the National Fences

Aintree racecourse will of course forever be associated with the race which is, not only the most famous race to take place at the track, but just about the biggest horse race to be run anywhere in the world. The Grand National aside though, this excellent jumping venue stages numerous other high-quality contests throughout the season, including this winter cracker.

Named after the local Merseyside village of Sefton, and first run way back in 1865, the race quickly became one of the most targeted and popular contests of the autumn months, remaining part of the British fixture list until 1965. The fortunes of the event had been steadily diminishing for some time prior to that though, and when the contest was scrapped ahead of the 1966 season, it appeared it may be gone for good.

Fast forward to 2003 and the decision was made to revive the race as part of Aintree’s Becher Meeting in December, with one key change. The 2m5f trip remained the same, but rather than being run over standard National Hunt fences, the race would now be contested over 18 of the world famous Grand National obstacles. A Grade 3 handicap affair open to runners aged six and older, the contest has only gone from strength to strength since making its comeback.

Eight And Nine Year Olds Out In Front

We don’t have an overwhelming trend in evidence here when looking at the ages of the winner since the reintroduction of the race in 2003. It does however seem that some experience – but not too much – is beneficial, with the eight and nine year old contenders winning close to 65% of the editions to have been run to date between them. Any conclusions can only really be tentative though, at what is still a relatively early stage in the race’s second life. 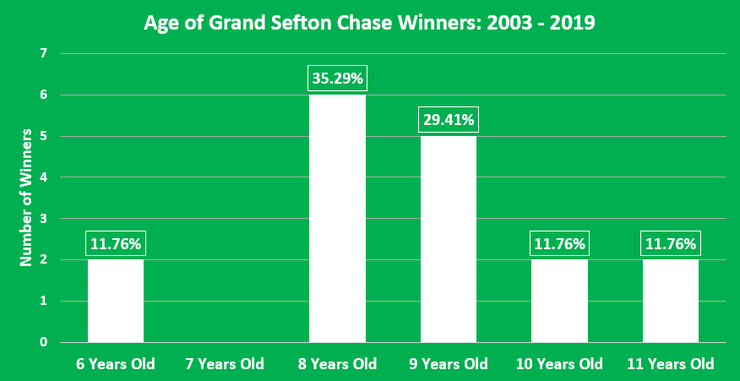 There are of course exceptions to the above trend, with Dark Room (2003) and As De Mee (2016) belying their inexperience to score at six years of age; and Hakim (2005) and Gas Line Boy (2011) landing blows for the elder statesmen, when coming home in front after their 11th birthdays.

This has proven to be a fairly open contest in terms of trainer and jockey trends, with the 17 editions of the race to have been run since 2003 being shared between 14 different trainers, and 16 different jockeys.

No real surprise to see it is the name of Paul Nicholls who leads the way amongst the handlers. First successful with Rebel Rebellion in 2013, Nicholls’ third success with Warriors Tale in 2018 moved him one clear of dual winner Jim Goldie.

The only jockey to land the prize on more than one occasion, again as of 2019, is the man aboard Paul Nicholls’ two most recent winners; the supremely talented Sean Bowen having partnered both As De Mee and Warriors Tale to victory. Warriors Tale also warrants a special mention as the only horse to date (as of 2019) to carry top weight of 11st12lb to glory.