Fans of Aintree’s big Grand National fences are in for a real treat here, as the Merseyside venue lays on not one, but two cracking chase contests over the most famous obstacles in the world. Previously held on the same day as the Becher Chase, the Grand Sefton Chase will, from 2021, headline Aintree’s Autumn Raceday in November.

The Grand Sefton was first run in 1865 but the race was discontinued after 1965 at a time when Aintree’s popularity was declining and the track was sold to a property developer. In 2003, with racing at Aintree is as popular as ever, the Grand Sefton was brought back into the racing calendar.

There will be plenty in with chances in an often competitive renewal but for us, previous form over the fences trumps all else in this race.

About the Grand Sefton Chase: Back Over the National Fences

Aintree racecourse will of course forever be associated with the race which is, not only the most famous race to take place at the track, but just about the biggest horse race to be run anywhere in the world. The Grand National aside though, this excellent jumping venue stages numerous other high-quality contests throughout the season, including this winter cracker.

Named after the local Merseyside village of Sefton, and first run way back in 1865, the race quickly became one of the most targeted and popular contests of the autumn months, remaining part of the British fixture list until 1965. The fortunes of the event had been steadily diminishing for some time prior to that though, and when the contest was scrapped ahead of the 1966 season, it appeared it may be gone for good.

Fast forward to 2003 and the decision was made to revive the race as part of Aintree’s Becher Meeting in December, with one key change. The 2m5f trip remained the same, but rather than being run over standard National Hunt fences, the race would now be contested over 18 of the world famous Grand National obstacles. A Class 2 handicap affair open to runners aged six and older, the contest has only gone from strength to strength since making its comeback. Such is the Grand Sefton’s popularity, it was moved to the Autumn Raceday in November from 2021.

Eight And Nine Year Olds Out In Front

We don’t have an overwhelming trend in evidence here when looking at the ages of the winner since the reintroduction of the race in 2003. It does however seem that some experience – but not too much – is beneficial, with the eight and nine year old contenders winning 70% of the editions to have been run to date between them. Any conclusions can only really be tentative though, at what is still a relatively early stage in the race’s second life. 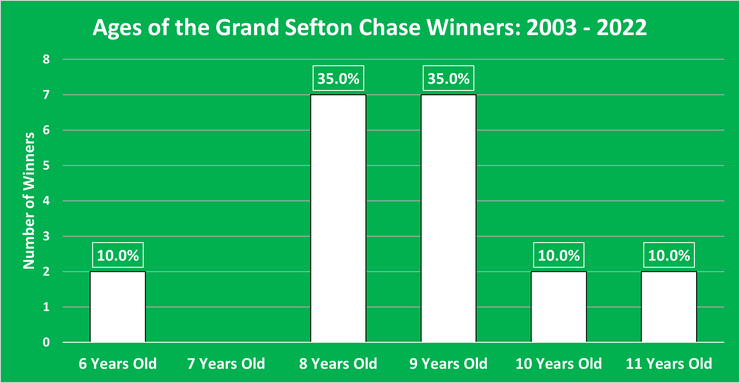 There are of course exceptions to the above trend, with Dark Room (2003) and As De Mee (2016) belying their inexperience to score at six years of age; and Hakim (2005) and Gas Line Boy (2011) landing blows for the elder statesmen, when coming home in front after their 11th birthdays.

This has proven to be a fairly open contest in terms of trainer and jockey trends, with the 20 editions of the race to have been run since 2003 being shared between 17 different trainers, and 19 different jockeys.

No real surprise to see it is the name of Paul Nicholls who leads the way amongst the handlers. First successful with Rebel Rebellion in 2013, Nicholls’ third success with Warriors Tale in 2018 moved him one clear of dual winner Jim Goldie. 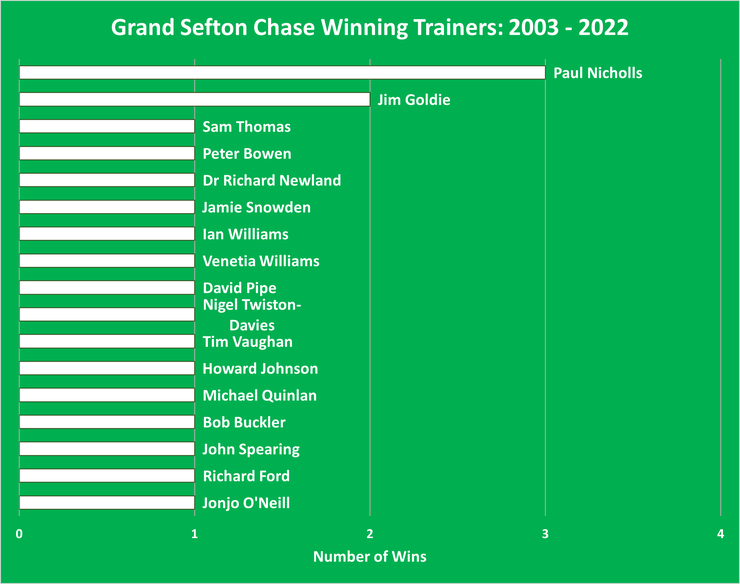 The only jockey to land the prize on more than one occasion, again as of 2022, is the man aboard Paul Nicholls’ two most recent winners; the supremely talented Sean Bowen having partnered both As De Mee and Warriors Tale to victory. Warriors Tale also warrants a special mention as the only horse to date (as of 2022) to carry top weight of 11st 12lb to glory.