The four-day Ebor meeting at York begins on a Wednesday and the Great Voltigeur Stakes is one of the races ensuring that things get off to a thrilling start.

The race gets its name from the Yorkshire-trained St Leger & Derby winner, Voltigeur. Since its 1950 introduction, 14 horses have won both this race and the St Leger the following month, the last of which was Logician who did the double in 2019 for John Gosden.

About the Great Voltigeur Stakes 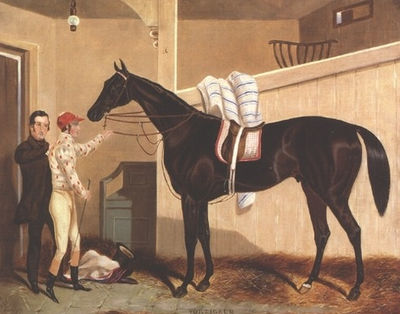 Voltigeur may not be a name you’ve heard of before but in his heyday he was one of Yorkshire’s best sporting assets. The British thoroughbred secured victories in The Derby, St Leger and then Doncaster Cup after famously edging out the previously unbeaten, The Flying Dutchman, by half a length. Upon his death in 1874, the Sheffield Telegraph called Voltigeur “the pride of the Yorkshire sportsman…and one of the most popular horses that ever trod British turf.”

Seeking to pay tribute to such a fine horse, York Racecourse introduced the Voltigeur Stakes in 1950 with ‘Great’ added to the title seven years later. It’s at York where the Group 2 contest has remained, now scheduled to play a major role on the opening day of the course’s excellent Ebor Festival. Run over a distance just shy of a mile and a half, it serves as one of the main trial races for another of Yorkshire’s big contests, the esteemed St Leger.

Much like the St Leger, the Great Voltigeur Stakes is also restricted to three-year-olds but it does have additional limitations. For starters, only colts and geldings can compete in this race and there are also penalties of 5lb and 3lbs respectively handed to former Group 1 and Group 2 winners respectively.

Fourteen Great Voltigeur Stakes winners have successfully secured further success in the last Classic of the season, the St Leger. The latest horse to do so was Logician in 2019. Before this, the previous dual winner was Lucarno in 2007. Having averaged a double winner every five years approximately before Lucarno’s win, the 12-year wait for Logician to be the next to complete the feat means that his victories were rather overdue.

It’s hard to say anyone even come especially close between Lucarno and Logician either. Several Great Voltigeur champions have swerved the test at Doncaster while others have struggled to fully cope with the fiercer competition as the chart below shows: 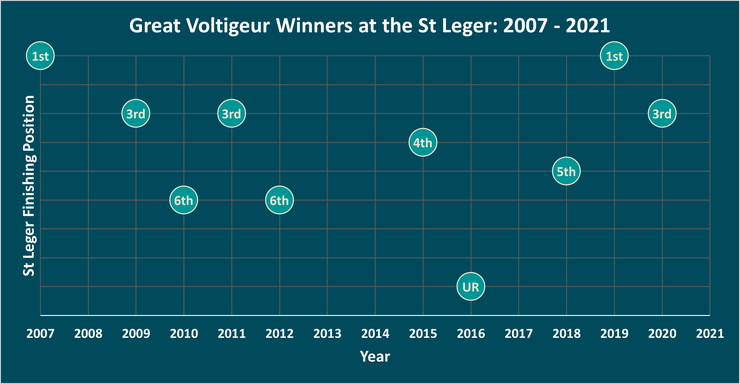 We stated above that 14 horses have pulled off the Great Voltigeur/St Leger double but had the stewards been feeling a bit kinder in 1969, the figure would be 15. Intermezzo, ridden by Australian jockey Ron Hutchison, found himself boxed in during the final Great Voltigeur renewal of the late 1960s but forced open a gap for himself on the way to victory. It turned out to be a little too forceful in the end with the stewards demoting the future St Leger winner to fourth spot.

For a test of virtually one and a half miles in length, it’s always good to know if a horse can last the trip. Since 2010, over 41% of all competitors in this race had secured a previous 12 furlong victory but many of them have fallen short in this contest with only around 1/3 of winners previously having been successful at 1m 4f or further. 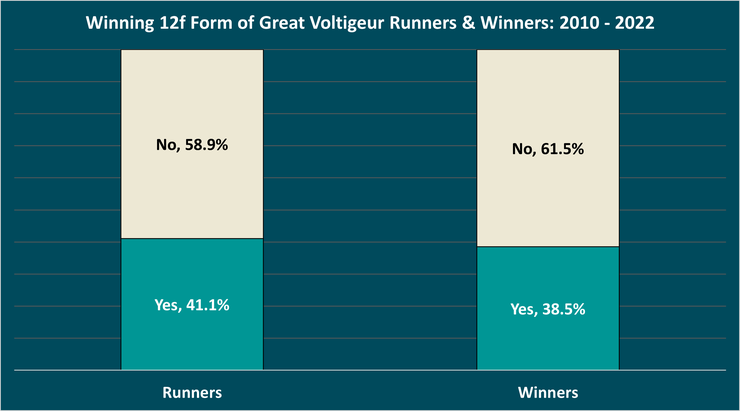 In fact, Old Persian became the first horse sporting a (D) next to his name on the racecard to win this race since Youmzain in 2006. This started a run of winners with 12f+ form between 2018 and 2022. As a result, though former distance experience seemed to count for very little previously, it might be time to put some more faith in 12 furlong winners to thrive at York.

Typically this race features fields ranging from six to 10 horses so purely going by averages you’d expect there to be a winner from the first stall every eight years or so. Such an assumption would lead you far from reality though as in actual fact, runners starting in the inside gate have fared very poorly indeed. The last horse to successfully overcome what appears to be the rotten draw was Pentire, all the way back in 1995. Although it’s hard to think there’s much draw bias in a race of this length, a 25+ year winless streak for horses starting by the rail is hard to ignore and has to be worth considering when placing your bets.

The chart below shows the draw of Great Voltigeur winners between 1996 and 2022. Please note that the 2008 race was run at Goodwood so has been discounted from these figures. 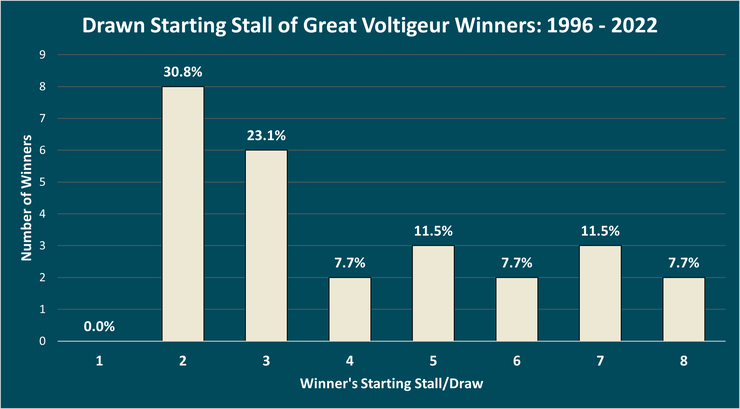