Early September each year sees Haydock racecourse play host to its biggest flat race of the season, as the speedballs go to post for this pedal to the metal sprint event.

Established in that fine footballing year of 1966, and a Group 1 since that not so fine football year (for England at any rate) 1988, it remains one of the best events of its type of the British Flat season.

Six furlongs is the trip for this Group 1 contest which is open to all runners aged three and older, and offers £225,000 in total prize money. The ground at the track is currently described as soft which looks unlikely to change dramatically based on the forecast.

The race may be open to all runners aged three and older, but it has been youth which has been strongly favoured in recent times with five of the past six editions falling to a three year old.

A number of the trainers represented in 2020 have previous form in this race, with Tim Easterby, James Fanshawe and Sir Michael Stoute all boasting two previous wins in the event.

Currently heading the betting this time around is the course and distance winner, Dream Of Dreams. Making the trip north from the yard of Sir Michael Stoute, he has the trainer trends in his favour, but now six years old, the age stats are against him.

Some runners do get better with age though, and this one arrives in the form of his life; an opinion shared by the official assessor, who has raised him to a career high mark on the back of a highly impressive success in the Group 2 Hungerford Stakes at Newbury. He did start favourite that day and was entitled to go close on form, but to slam the field by an easy seven lengths was a super performance and makes him just about the one to beat on this season’s form.

One negative against his chances of success in this one is the fact he was beaten by five lengths in this contest last season. However, there may well have been legitimate excuses for that as he received a pretty hefty bump soon after the start. The fact that he had previously landed a novice event over track and trip back in 2016 lends further support to his ability to handle the course. Twice going down by just a head in Group 1 company, this may represent his best chance yet of breaking his duck at the top level.

We haven’t had a back to back winner of this race since the successive victories of Be Friendly in the first two editions of the race back in 1966 and 1967. Hoping to join the inaugural winner as a dual champ this season is the Kevin Ryan-trained runner, Hello Youmzain.

A Group 2 winner as a juvenile, he then enjoyed an excellent campaign at three, with the highlight of course being his half-length verdict over The Tin Man in this contest – Dream Of Dreams featuring amongst the vanquished that day. As well as ever in three starts this season, he landed the big one when withstanding the late thrust of Dream Of Dreams in the Diamond Jubilee Stakes at Royal Ascot, before slightly disappointing when fifth in the July Cup at Newmarket.

Last sighted finishing a close up second to the talented Space Blues in a Group 1 over in France, he is proven and consistent at this level, boasts career form figures of 211 at the track, and is a perfect two from two on soft ground. Kevin Stott once again takes the ride and he looks rock solid to go well.

The three year old challenge is again strong this year, with the likes of Lope Y Fernandez, who began the season in the Irish 2,000 Guineas; and Clive Cox’s smart Golden Horde boasting sound claims. However, with the ground riding as it is, the strongest challenge from the classic generation may arrive in the shape of Tim Easterby’s Art Power.

As mentioned, Easterby has landed this prize twice in the past, so knows what it takes to succeed, and has long held this one in the highest regard. Winning in impressive style on his final start at two, he returned to the track with an equally easy victory at Newcastle in June, before then turning a quality handicap at the Royal meeting into something of a procession. Sent over to Ireland for a Group 3 on the back of that, he promptly slammed a Group 3 field including Millisle to rubber stamp his class.

Expected to give Battaash something to think about in the Nunthorpe last time out, he instead ran a shocker – looking beaten after around a furlong. Something was surely amiss in that five furlong good ground event, and the longer trip and slower conditions here may also suit better. Two from three over six furlongs, and unbeaten in two starts on soft ground, he boasts sound claims of bouncing back from that York effort.

About the Sprint Cup Stakes 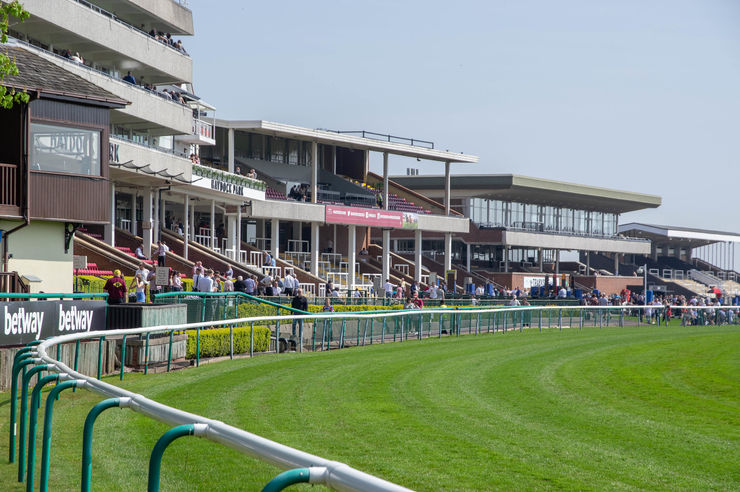 Haydock Park hosts top quality meetings during both the National Hunt and flat racing seasons. Jumps highlights at the Merseyside course include the Betfair Stayers’ Handicap Hurdle, the Betfair Chase and trials for big races such as the Champion Hurdle and Grand National. Haydock’s flat course hosts well regarded contests ranging from the 5 furlong Temple Stakes to the 1 mile 3 furlong 200 yard Lancashire Oaks but it’s the Sprint Cup that really stands out.

Run over just 6 furlongs, the Sprint Cup is the sole Group 1 race held at Haydock during the flat racing season, having been promoted to that level in 1988. By that stage the race was already over 20 years old (it was first run in 1966) and was held in very high regard by fans and those in racing but it has been held in even higher regard since that promotion to the top level and has subsequently been won by some very high class sprinters.

AUTUMNAL GROUND CAN GIVE OUTSIDERS A CHANCE

The Haydock Sprint Cup saw an even bigger boost to its prestige when it was included in the inaugural British Champion Series in 2011. As with the other five races in the Sprint Division before the British Champions Sprint Stakes, the Sprint Cup is a very important race but it is a little different compared to the others.

The reason for that is that the Sprint Cup is run in early September. Whereas the going is almost always good or firm in the big races run during the summer, underfoot conditions can often be rather softer at Haydock as the flat racing season approaches its closing stages. That demands a certain amount of stamina on behalf of the leading contenders, especially when the rain falls in the days leading up to the Sprint Cup.

The Sprint Cup has become a much more straightforward race since 1986 when Haydock increased their home straight to 6 furlongs and therefore got rid of the early bend that the field had to contend with. However, the slower ground means that it sometimes struggles to attract the stars that turn out for the other British Champion Series sprints. Whilst that poses some problems for the event organisers it does mean that punters have the chance to win big as winning favourites are relatively rare in the Sprint Cup.

YOUNGER HORSES SHOULD NOT BE WRITTEN OFF

The Haydock Sprint Cup was originally open to two-year-olds. Be Friendly (the first ever Sprint Cup winner) and The Blues were the only two-year-olds to win before the minimum age of competitors was raised to three in 1994. Since then, the youngest horses have had a very good record whilst those over five have struggled, as we can see below. 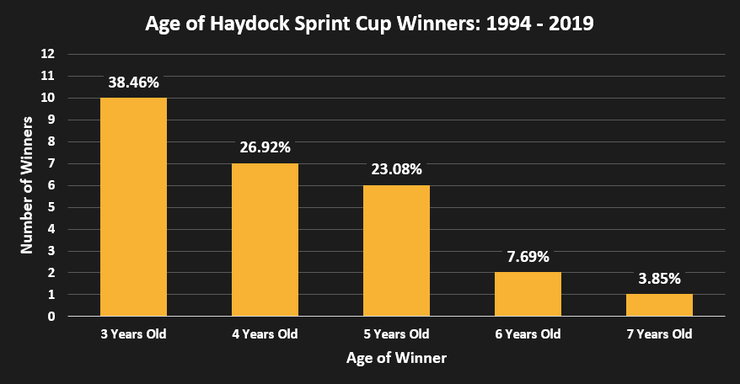 It is important not to take that stat in isolation. The three and four-year-olds who have won the Sprint Cup since 1994 all arrived at Haydock with their fair share of experience. Horses without at least two wins over 6 furlongs historically struggle to win the Sprint Cup. Moreover, those with previous experience at Haydock have a real edge, especially if they’ve dealt with the ground conditions found on the day of the race before.

With the caveat that many high quality horses get pulled from the Sprint Cup when the ground gets to the softer side of good, the trends show that it’s worth siding with horses who have already won at Group level. It always takes a high class performance to win this race so it’s little surprise that horses who have shown they can compete with some of the best sprinters around have a strong record.