There is an excellent Saturday card on offer from Haydock Park towards the end of November, with a number of the big names from the previous season making their return to the track.

The Betfair Chase may be the headline act, but there’s plenty more on offer besides, including this staying handicap for the hurdlers. Until 2017 this race utilised rarely used Fixed Brush hurdles before reverting to regular hurdles and is often seen as an ideal stepping stone from the hurdling to chasing ranks.

A testing distance of 3m½f is the trip for this Grade 3 handicap hurdle which offers £80,000 in total prize money. The ground at the track is currently described as soft, and with only minimal rain forecast it isn’t expected to deteriorate come race day.

Of the trainers on show this year, Henry Daly, Philip Hobbs, Alan King and Dan Skelton all have a previous win in the race to their name. It is David Pipe who tops the all-time trainers’ table though with three successes on the board. Pipe sends the well-fancied Main Fact into battle this time around.

The younger end of the age spectrum has held the edge in this event, with 11 of the fifteen editions to have been run to date having been landed by a runner aged six years or younger. That’s a particularly interesting stat this year, as only five of the 17-runner field fall into the favoured age bracket.

In common with many competitive handicap contests, the market has found this race tough to call over the years. The past 10 years have featured just the one winning favourite, handing supporters of the market leader a loss of £7.50 to £1 level stakes.

The market may well be factoring in that trend towards the younger runners, as three of the five contenders aged six and under feature in the top five in the betting in this field of 17. The shortest price of that trio is the Fergal O’Brien representative, Imperial Alcazar.

This six year old son of Vinnie Roe certainly scores top marks for consistency having only once finished outside of the first three in his six career starts to date. Unable to quite break his duck in three bumper outings, he improved for the switch to hurdles last season in winning in Class 4 and Class 3 Novice company. The pick of his efforts though came in the Listed Ballymore Novices Hurdle at Cheltenham in January. Initially beaten by a head into second that day, he was awarded the race on the day by the stewards only to then be subsequently demoted to second once again upon appeal.

That’s solid enough form ahead of a handicap debut off a mark of 140, and form which has already been given a significant boost this season. The horse involved with Imperial Alcazar in that back and forth business with the stewards was none other than Dan Skelton’s Protektorat. The same Protektorat who slammed Paul Nicholls’ 146-rated chaser Southfield Stone by 17 lengths on his fencing debut this season. Paddy Brennan takes the ride and this one looks a threat to all.

Considering this race only made its debut in 2005, and is invariably one of the most competitive staying handicap hurdles on the calendar, David Pipe has done very well to rack up three wins already. Anything the Nicholashayne handler sends to post is therefore always worth a second look, and all the more so when that runner arrives seeking a ninth win on the spin.

Step forward the remarkable, Main Fact. A winner of two of his 15 starts with his two previous handlers prior to joining the Pipe operation in June 2018, the son of Breeders’ Cup Classic winner, Blame, was given the best part of two years to settle into his new surroundings before making his comeback appearance at Exeter. Given that time away from the track, it was therefore most encouraging that he managed to finish a close up third in that event. And that certainly suggested that a lowly mark of 98 may not be beyond him. It was still pretty difficult to predict what was to come though, with the gelding winning his five subsequent starts over hurdles, rising fully 49lbs in the handicap in the process.

Fit and well from three successive wins on the flat so far this season, the soft ground here will be in his favour. The big question mark concerns the fact that he will be stepping up to 3m for the first time. However, he has often shaped like a stayer, and his most recent hurdles outing resulted in a 15 length demolition job in a 2m4f heavy ground contest at Uttoxeter. This one may not be done improving quite yet.

There are a whole host of interesting contenders amongst those available at a double figure price, including the high-class Kalashnikov at the head of the weights, and Alan King’s hero of a dual purpose performer, Who Dares Wins. Anyone seeking an each way punt in the race may want to consider West To The Bridge from the yard of Dan Skelton.

Skelton knows what it takes to land this prize having saddled Baradari to victory in 2015 and would look to have a lively outsider this year in the shape of this son of Flemensfirth. As a seven year old making his 15th appearance over hurdles, this one doesn’t boast the most obvious profile for the race, but on the evidence of this season’s form he does seem to have found a new lease of life. This is an opinion with which the handicapper agrees with having raised the horse to a career high hurdles mark of 140.

Making his seasonal debut over just shy of this trip at Uttoxeter, this regular front runner reverted to hold up tactics, and put in a fine effort to finish a close second despite getting the final flight wrong. Once again held up over 2m4f last time out at Carlisle, he cantered all over the field from a long way out that day before powering clear for a three and a quarter length success from the useful Mount Mews. Seemingly in the form of his life, he offers decent each way value with a number of firms paying out on the first five.

About the Stayers’ Handicap Hurdle: Stamina On Show At Haydock

First run in 2005, this 3m½f contest for the staying handicappers has quickly become an integral part of the hurdling programme for those runners who boast stamina as their strong suit. Open to horses aged four and older, this Grade 3 event is scheduled to take place at the Merseyside venue of Haydock in November each year.

Initially held over the slightly shorter trip of 2m7f, it wasn’t until the 2018 renewal of the race that the current distance was introduced. The type of obstacle encountered by the competitors has also varied over the first 15 editions, with the French style “Fixed Brush” hurdles being utilised between 2007 and 2016. These stiffer obstacles are essentially similar in construction to British fences but smaller in size. The race reverted back to standard hurdles in 2017.

Whilst the trip and hurdle type may have altered over time, one thing which has remained constant up to 2019 is the sponsorship of the race. Betfair lent their support to the very first edition of the race and have maintained that backing ever since.

Being a hurdle contest, it perhaps isn’t too surprising that the younger performers have led the way in this event to date. The edge has nevertheless been pretty pronounced, with almost 70% of the opening 16 editions falling to a runner aged either five or six.

Those over seven years of age have rarely troubled the judge, and so special mention must go to the Philip Hobbs runner Kruzhlinin, who became the oldest winner in the early history of the race when coming home in front in 2016 at the ripe old age of nine.

Pipe And Scudamore At The Double

One interesting fact about the opening 16 editions of this race is just how open it has been in terms of the variety of trainers and jockeys to have come home in front. As of 2020 only two trainers and one jockey have landed the prize on more than once occasion. 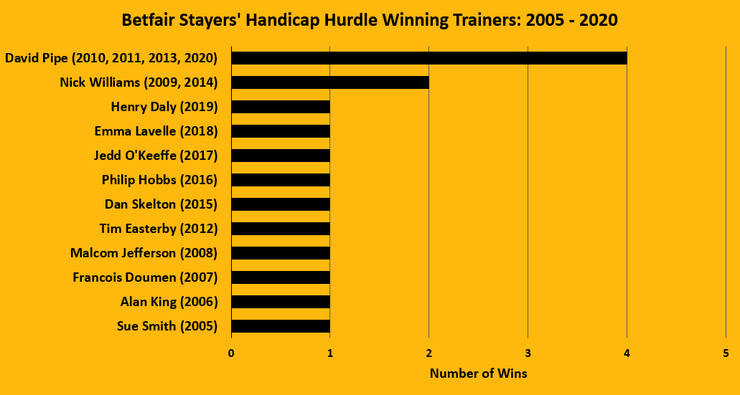 David Pipe is the standout trainer here with four victories between 2010 and 2020. Only Nick Williams with Diamond Harry and Aubusson has been able to join Pipe in training more than one winner of this contest.

Teaming up with David Pipe onboard Grands Crus in 2010 and Gevrey Chambertin in 2013, Tom Scudamore holds the narrowest of leads in the jockey tables for the race.

Paisley Top Of The Pile

This may “only” be a handicap contest, but that doesn’t mean it hasn’t attracted a number of extremely high-class performers over the years. Millenium Royal (2007) was a Grade 1 winner in France; whilst Diamond Harry (2009), Grand Crus (2010), Dynaste (2011) and Sam Spinner (2017) all counted a domestic Grade 1 success on their CV. Synchronised meanwhile could manage only third in this in 2011, but went on to enter the history books with a famous win under Sir Tony McCoy in the 2012 Cheltenham Gold Cup.

The classiest winner of the race as of 2020 though, is 2018 victor Paisley Park. Emma Lavelle’s stable star announced himself on the staying hurdle scene success in this race and went on to dominate the division, with two Grade 1 wins to date – including success in the 2019 Stayers’ Hurdle at the Cheltenham Festival.