Sandown’s Henry VIII Chase is named after England’s infamous 16th century monarch who used Esher, where the racecourse is located, as a hunting ground.

The race itself was first run in 1987 and see’s young chasing hopefuls test themselves over Sandown’s difficult fences. At just under 2 miles, mistakes can be costly. The list of former winners is an impressive one and includes fans’ favourites such as Racing Demon, Fair Along, Somersby and Altior.

One mile seven and a half furlongs is the trip for this Grade 1 event for the Novice chasers which this year looks set to be run on soft ground, though heavy rain on Friday may see that get a little stickier. Offering £45,000 in total prize money, the race regularly attracts a field of the most promising young chasers in the game and this year is no different. With some lucky fans in attendance, we are all set for a great race and these are our betting tips.

As is the case in most races these days, the big-name trainers have boasted the best record in this race over the years. Four-time winner Nicky Henderson has a decent strike-rate in the event, but that still puts him three successes behind his perennial rival, and all time leader in the race, Paul Nicholls. Successful most recently with Dynamite Dollars in 2018, Nicholls sends Hitman and Tamaroc Du Mathan into battle this time around.

Open to all novice chasers aged four and older, this Grade 1 contest has been dominated by the five and six year olds of late, with each of the past nine renewals falling to a runner from that age bracket. We did see a hat-trick of victorious four year olds from 2006-2008, with Thisthatandtother the last horse aged seven or older to win, back in 2003.

This hasn’t been a race for favourite backers to strike gold in over the past decade. A 33% strike rate over this period (the race was abandoned in 2010) is healthy enough, but with all three of those winners returning an odds-on SP, that would still have resulted in a loss of £4.78 to £1 level stakes.

Dan Skelton is yet to follow in his former master Paul Nicholls’ footsteps by winning this race, but he has been knocking on the door of late – sending out the runner up in both 2019 and 2017. This year does however look to represent his best chance yet of breaking his duck, as it is his four year old, Allmankind who currently shades favouritism in most lists.

The recent age trend may be against this son of Sea The Moon, but he’s 3lb clear of the field on the official ratings, and in addition receives the 6lb weight for age allowance from Tamaroc Du Mathan, Phoenix Way and Eldorado Allen. A talented performer over the smaller obstacles, he scored in Grade 1 company when routing the opposition in the Finale Hurdle at Chepstow, before running a solid race in third in the Triumph Hurdle at the Cheltenham Festival.

Disappointing in that sphere on his seasonal return at Prestbury Park, he was swiftly sent over fences and could scarcely have been more impressive in sauntering to a 13-length success at Warwick, jumping notably well throughout. This demands more, but with the runner up from that Warwick contest since going on to win a handicap chase by an effortless 5½l off a mark of 138, the form looks solid. Harry Skelton takes the ride, and this one looks likely to make a bold bid from the front.

Hitman and in particular Ga Law also look very dangerous from the four year old brigade, but that age trend is a strong one and as such it may prove unwise to ignore the claims of the six year old, Tamaroc Du Mathan and five year old Eldorado Allen. Hailing from the Nicholls operation, Tamaroc Du Mathan certainly can’t be dismissed, but on the formbook, it is the Colin Tizzard runner, Eldorado Allen who rates the bigger threat.

Joining the Dorset handler in October 2018, this strapping grey seemingly hasn’t been the easiest to train and posted very patchy form over hurdles – mixing solid efforts with heavy defeats. Rounding off the campaign with a complete no-show in the County Hurdle at the Festival, it was difficult to know what to expect headed into the current campaign.

The early quotes from the yard were encouraging though with Eldorado Allen reportedly looking like a different horse on the back of his summer break. And in two starts so far this season over fences he has indeed performed like a completely different horse.

Two lengths too good for Stormy Ireland on chase debut at Newton Abbott, that winning margin would likely have been even greater but for almost running through the last. Stepped up into Grade 2 company at Cheltenham last time out, there were no major jumping errors this time, but he looked to have a serious battle on his hands prior to Gumball coming down two from home.

Allowed to saunter home after that, there was nevertheless fully 19 lengths back to the useful Quel Destin in what was a seriously smart performance. So smart that Colin Tizzarsd rates him the best 2m chaser the yard has had. If that assessment is true, then he should certainly be well be up to taking this if he performs at his best.

About the Henry VIII Novices Chase: Rising Stars on Show at Sandown

December is a big month for National Hunt racing, as the latest season really begins to find its stride. As one of the top dual-purpose tracks in the sport, Sandown Park does its bit for the jumping side of the game at this time each year, with the staging of what is just about its biggest National Hunt card of the season. Chief amongst the supporting cast on the always popular Tingle Creek Chase Day is this high-class event for the up and coming novice chasers.

First run in 1987, the event takes its name from one of Britain’s most infamous monarchs – not due to Henry VIII’s love of racing, but as a nod to the fact that “he of the six wives” utilised the Esher venue as a royal hunting ground during his reign.

Initially a Grade 2 event, a steady stream of high-quality winners – including Grade 1 stars Direct Route, Thisthatandtother and Contraband – led to this two mile contest, which is open to novice chasers aged four and older, being handed Grade 1 status for the first time in 2011. 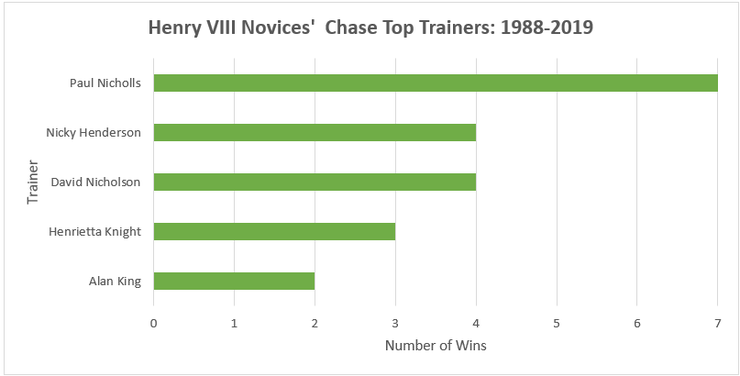 In common with many Grade 1 contests over the course of the British season, it is the name of Paul Nicholls which sits atop the trainers table in this race. First successful in 2003 with Thisthatandtother, by 2018 Nicholls had racked up seven wins. The pick of that septet being 2011 Supreme Novices’ Hurdle champ, Al Ferof. In addition to his win in this race, the ever-popular grey went on to land the Paddy Power Gold Cup, and achieve the not inconsiderable feat of finishing third in three successive King George VI Chase’s at Kempton.

Awesome Altior Top Of The Class

Nicholls’ big rival Nicky Henderson may be three behind when it comes to number of wins in the race, but there’s no doubt that it is the Lambourn handler who is responsible for saddling the most talented winner in the history of the event: The mighty Altior. One of the highest-class chasers of the modern era, Altior stormed to a six length success in this race in 2016, before going on to a further nine (and counting) Grade 1 triumphs, including an Arkle Chase and two Queen Mother Champion Chases.

Big Names Out in Front

Seven jockeys in all have recorded multiple wins in this event as of 2019, with the above table containing some of the most talented and successful riders to ever climb into the saddle.

The greatest of all time Sir Tony McCoy of course needs little introduction. With three of his record-setting total of 4,348 career victories coming in this race, it is he who leads the way, alongside the rider who is fifth in that all-time career wins list: Richard Dunwoody. One victory behind that duo, and in a five way tie for second, is the third best rider of all time in terms of number of wins, and one of the most naturally gifted riders of his generation: Ruby Walsh.