We’ve got back to back Classic contests in mid-June, this time over in Ireland at the Curragh. Hot on the heels of Friday’s Irish 2000 Guineas, Saturday sees the fillies given their chance to show what they are made of in the Irish 1000 Guineas.

This was first run in 1922, the year following the inaugural Irish 2000 Guineas. Aidan O’Brien is the contest’s leading trainer with nine victories spanning from Classic Park in 1997 to Peaceful in 2020.

There is €250,000 in guaranteed prize money is on offer for the first fillies’ Classic of the Irish flat season, the Irish 1,000 Guineas, which sees the top female performers competing over a trip of one mile. The ground at the track is described as good to firm at the time of writing, but with at least some showers on the way, that could change before the race runs.

It’s Classic time at the Curragh this weekend, and hot on the heels of Friday’s 2,000 Guineas comes the filly’s version of the race on Saturday evening. No British raiders this year, but this still looks an excellent renewal, with the majority of the top Irish yards represented.

Aidan O’Brien has of course already plundered the British version of this race in 2020, and it is he who boasts the best training record in this event with eight previous successes. O’Brien sends two runners to post this year, whilst his sons Joseph and Donnacha are also represented.

Hermosa landed the odds for favourite backers in this event 12 months ago, but overall, this has only been an average contest for supporters of the market leader. The past decade has seen three winning jollies, returning a level stakes loss of just under two units.

Heading both the betting and the official ratings for this year’s edition is the Jessica Harrington-trained, Albigna. By Zoffany and out of a Selkirk mare, this one wouldn’t be as spectacularly bred as a few others in the field, but she does boast the best juvenile form in the book, and as such it’s hard to argue too much with her place at the head of the market. Trainer Jessica Harrington, sent out Alpha Centauri to land the prize just two seasons ago, so clearly knows the type of runner needed to succeed.

A winner of a Group 2 race on just her second career start, she was then done for pace in a seven furlong Group 1 event at this track, before scoring in really good style to claim a top-level contest over in France. Her final start at two years of age then saw her finish with real purpose to be beaten under three lengths in the Breeders’ Cup Juvenile Fillies’ Turf over in America. With the pick of her career form coming on very soft ground in that aforementioned French race, her claims will likely be enhanced with every drop of rain that falls, but she looks set to run a big race whatever the conditions.

The shortest priced of the two Aidan O’Brien-trained runners is the Galileo filly, Peaceful. Raced three times at two, she ruined all chance when becoming upset in the starting stalls on debut, before showing real promise to stay on late in the race. Next time out at Thurles she broke smartly to do all of her own donkey work, before powering right away for a seven-length success – suggesting that she may well be worth stepping up in class.

Handed her opportunity in Listed company at Newmarket on her final start of the season, she ran well enough to go down by just a fast diminishing neck to debutante Born With Pride. That effort is probably worth upgrading too as she did seem to be racing on the disadvantaged side of the track that day. However, with the winner having since been well beaten at Group 3 level, Peaceful will likely need to find significant improvement to take victory in this one. Of course, that is by no means impossible given the excellent track record of her trainer.

Fancy Blue spent much of last season officially being under the care of Aidan O’Brien, but reports would suggest it was Donnacha O’Brien who had the most input in her development. It was therefore no surprise when the daughter of Deep Impact was transferred to Donnacha’s new training operation in January of this year. Amongst the fillies from the yard of the fledgling handler, Fancy Blue may well be the one most likely to possess a little star quality.

Two wins from two last season, she impressed with her attitude when getting herself out of a pocket to reel in the leader at Naas, and again caught the eye when passing the whole field in the final couple of furlongs to score over this course and distance in a Listed contest in October. The fact that she was able to stay on so well in what was soft ground that day certainly suggests she won’t be outstayed, and she must have a big chance if not getting too far behind in the early stages.

One of the most interesting contenders amongst those at double figure odds is another runner from the O’Brien clan: New York Girl, this time from the yard of Joseph O’Brien. Given his association with father Aidan during his career in the saddle, it is a little surprising that Joseph didn’t manage to win this race as a jockey. He will be hoping for more luck as a trainer, and this daughter of New Approach is certainly not without a chance.

Looking a little overawed on her debut at Cork, she initially didn’t want to enter the stalls at all, and ran very green throughout the race. As such, she didn’t perform badly at all to get beaten by four lengths into fourth, particularly as she was checked twice in the home straight. Given the promise of that debut effort, hopes were high ahead of her second start in a Group 3 at this track, and she duly delivered, getting up to score by just a neck from stablemate A New Dawn – the same horse who finished a head second to Fancy Blue on her next start. That looks a very decent piece of form in the context of this race, especially as she again didn’t enjoy the clearest of runs that day. In an open looking race, she looks the each way value to our eyes.

About the Irish 1000 Guineas 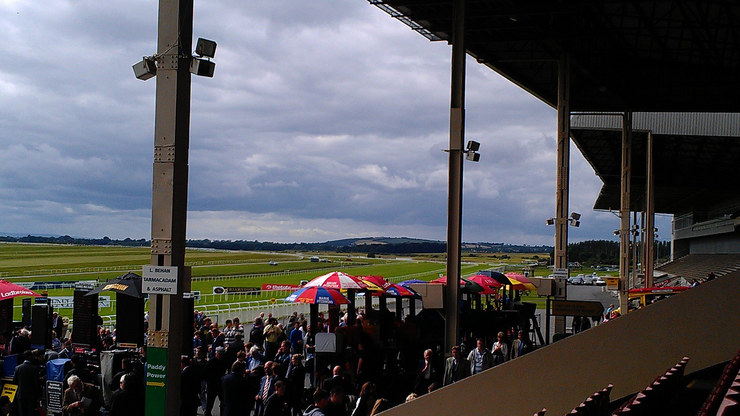 Such was the success of the inaugural Irish 2000 Guineas in 1921 that it was inevitable that the equivalent race for fillies would be introduced. So it proved to be with the Irish 1000 Guineas following just one year later.

The 1 mile race for three-year-old fillies has since grown to be every bit as important as the 2000 Guineas. Both races are now Group 1 contests and both are held at the Curragh every year exactly three weeks after the 1000 and 2000 Guineas take place at Newmarket, although in 2020 they are running just one week after their British equivalent. The usual scheduling is deliberate as the event organisers ordinarily very much want the protagonists from the Newmarket race to make the trip across the Irish Sea to compete at the Curragh.

Given the similarities between the two races in terms of the distance and the horses competing in both you’d think it would be relatively straightforward for the best horse to win both races. It doesn’t quite work like that though, as the ground at the Curragh in May or June is often considerably softer than at Newmarket.

Winning both races therefore requires an adaptability and level of experience that is often beyond the three-year-old competitors, so those in the list below who followed up Newmarket success with a win at the Curragh are certainly fully deserving of the plaudits that came their way.

LEADING CONTENDERS HAVE HIGH CLASS ROUTES IN AND OUT

Connections of horses who run in both the 1000 Guineas at Newmarket and the Curragh (and sometimes the Poule d’Essai des Pouliches, which is the top class French mile long race for three-year-old fillies) have likely made the decision to keep their fillies running over a mile for the foreseeable future.

That much is made clear by the paths taken by the main contenders, which often include the Coronation Stakes at Royal Ascot (Winter and Alpha Centauri won both in 2017 and 2018 respectively), the Falmouth Stakes at Newmarket and the Matron Stakes at Leopardstown towards the end of the season. 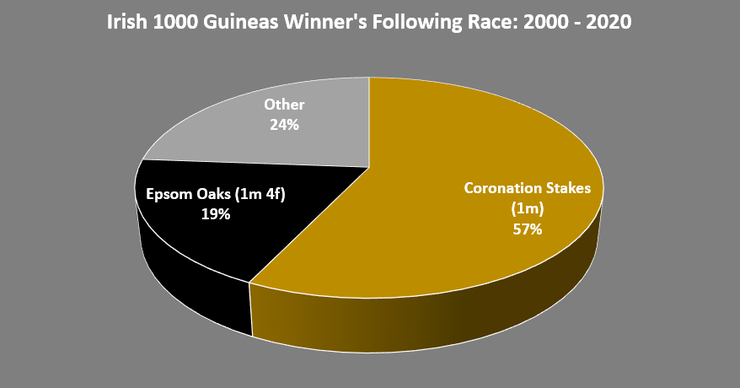 With the caveat that many horses who run in the Irish 1000 Guineas had their previous run at Newmarket, there are several potential routes into the contest at the Curragh. Whatever the route, the trends show that horses who ran in a Group level race last time out and those who had previous success at the Group level have a statistical edge.

O’Brien Ahead of the Chasing Pack

Perhaps due to a familiarity with the sort of ground found at the Curragh, Irish-trained horses have a very good record in the Irish 1000 Guineas. A quick look at the list of successful trainers includes the familiar names of Aidan O’Brien, Jim Bolger and Dermot Weld multiple times. The big beasts of Irish training are sure to have several tempting runners in the Irish 1000 Guineas in the years to come. O’Brien became the most successful trainer in the history of the race when Hermosa won in 2019, building his lead with Peaceful in 2020. It would be no surprise whatsoever if he extends the record with an tenth win sooner rather than later.

IMPRESSIVE JOCKEY RECORD TO STAND FOR A VERY LONG TIME

Seven wins is the magic number in terms of the jockeys but we have to go back into history to find the holder of that record. Morny Wing is the man at the top of the charts, which proves his highly impressive longevity. Wing partnered Lady Violette to victory in the inaugural Irish 1000 Guineas and claimed his seventh win 25 years later when Sea Symphony won in 1947.

In more recent times it’s been tough for any one jockey to have any sort of dominance over the race though Seamie Heffernan has edged into the lead with four wins, ahead of Ryan Moore, Jamie Spencer and Michael Kinane all of whom have won three times since 1980.