The pick of the action at the Knavesmire on John Smith’s Cup Day will see the middle-distance performers line-up for the meeting’s title race which is is one of the biggest handicaps of the summer.

The John Smith’s Cup has been a fixture at York since 1960 and has been sponsored by the local brewers for the race’s entire history. In 2019 the race had it’s 60th anniversary and to celebrate it was renamed the John Smith’s Diamond Jubilee Cup.

This Class 2 Heritage Handicap is run over a distance of 1m2½f and offers total prize money of £60,000 this year. The going at the track is described as good at the time of writing.

This hugely competitive handicap is open to all runners aged three years and older, but recent evidence would suggest that it may pay to focus on the four and five years olds in the field, with eight of the past nine winners falling into that age bracket.

Of the trainers represented this year, it is dual winners William Haggas and Sir Michael Stoute who boast the joint best records. Haggas sends Desert Icon and Sinjaari into battle this time around, whilst Stoute relies upon Solid Stone.

Given the big field and competitive nature of this event, it perhaps shouldn’t come as too much of a surprise that the market has struggled to call this race correctly: the past 10 years have seen a grand total of zero winning favourites.

With only a couple of points separating the first six runners in the market at present, it’s difficult to determine who will start as the favourite on the day. Currently just about shading it in most lists is the Sir Michael Stoute-trained and William Buick-ridden, Solid Stone, and there is certainly plenty to like about the claims of this son of Shamardal.

As a four year old, this one gets a tick in the age trend box, particularly as he arrives on the back of what looked to be a clear career best effort on his seasonal return at Sandown. Back in the pack as they turned for home in that one mile event, he looked to have plenty to do, particularly as the race had been run at a pretty sedate pace. As such, he did very well to ultimately be pulling away at the line for a two-length success. That did come over a mile trip, but he is already a winner at 1m2f, and may well cope with a seven pound rise in the handicap.

Another strong contender from amongst the four year olds is the Roger Varian-trained, Fifth Position. Being by Dark Angel and out of an Oasis Dream mare, this one has plenty of speed in his pedigree, but has foregone a sprint career to be campaigned at trips of one mile and upwards ever since making his debut last April.

Only one from five in his first season at the track, he nevertheless mixed it with some decent horses at Listed and Group 3 level – not being beaten far by the likes of Duke Of Hazzard and Elarqam. Fast forward to the current campaign and the Sheikh Mohammed Obaid Al Maktoum runner made his reappearance in a Class 2 handicap on the all-weather up at Newcastle.

He could manage only third that day, but hindsight has proven that race to have been a very strong race for the grade, with both the winner, Sir Busker, and runner up, Dark Vision, going on to score at the Royal Ascot festival. Fifth Position then franked that form himself when getting up late to score over this trip at Doncaster, and looks set to go well for Jack Mitchell off this five pound higher mark.

As the only trainer to land this prize more than once in the past decade, it could be worth paying particular attention to the two runners from the William Haggas operation. Having hosed up by eight and a half lengths last time out at Newmarket, Desert Icon certainly can’t be dismissed, even from this nine pound higher mark, but it may just be Sinjaari who boasts the slightly stronger claims.

This son of Camelot was a little hit and miss last season, but in fairness to the horse he simply looked a non-stayer in his two most disappointing efforts which came over a mile and a half. Boasting career form figures of 2123 at around this 1m2½f trip, this would look to be his best distance, and on the pick of last season’s form he has sound claims here. His most recent outing at 1m2f came at Goodwood when only beaten by two and three quarter lengths into third when running off a mark of 96 – an effort which can be upgraded due to him having to switch to the outside to challenge and his rider losing the reins inside the final furlong. Granted a better rub of the green he would surely have finished closer that day, and looks the type to go close here, getting in off 95 and having his first start since a gelding operation.

About the John Smith’s Cup: A Longstanding Handicap Highlight

When it comes to flat action in the North, it is York racecourse which is just about the jewel in the racing crown. Regularly voted one of the top tracks in the country in terms of facilities and race day experience, the Knavesmire venue can be counted upon to provide a steady stream of high-quality action throughout the summer months.

Taking place in July each year, the two-day John Smith’s Meeting is one such event which never fails to fill the stands, with the feature contest of the John Smith’s Cup being one of the biggest contests of its type of the calendar year.

Held over a trip of just over 1m2f, this handicap affair is open to all runners aged three and older and offers a total purse of £200,000 as of 2019 (this was £60,000 in 2020). Sponsored by John Smith’s ever since the inaugural edition back in 1960, the relationship between the race and the brewing company is now the longest running sponsorship arrangement in the sport.

We have plenty of recognisable names on the list of most successful trainers in this race; a list which features no fewer than three “Sirs” in Michael Stoute, Mark Prescott and Henry Cecil. 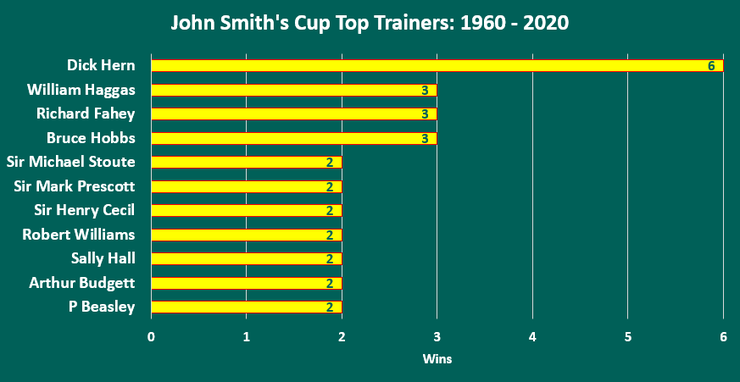 The locally based Richard Fahey has fared best of the current handlers as of 2020 alongside William Haggas, but it is the trainer commonly known simply as “The Major” who boasts the best record of all. Famous for his record in Doncaster’s St Leger, Dick Hern matched his total of six wins in the Doncaster Classic with the same number of victories in this handicap affair.

Successful aboard Town And Country (1978) and Bedtime (1983) for Hern, in addition to Jolly Good (1975) for Bruce Hobbs, Willie Carson’s three wins make him the most successful rider in the history of the event as of 2019.

Younger Legs Out In Front

As we can see from the above chart it is the younger runners who have much the best record in this race, with just a shade under three-quarters of the renewals up to and including 2020 falling to a runner aged either three or four.

Of the three year olds to have come home in front here, undoubtedly the best of them was the 1973 champ, Peleid. Not content with success in one of the North’s biggest handicaps, Bill Elsey’s charge proved himself to be way better than a handicapper when causing a 28/1 upset in the St Leger of the same year.

Amongst the four year olds to have prevailed, special mention must got to 2004 winner, Arcalis. Hailing from the yard of Howard Johnson, this horse scores top marks for versatility. Smart enough on the flat to win this off a mark of 95, he proved to be an even better horse over hurdles. So good in fact that he stormed to a six-length success in the 2005 Supreme Novices’ Hurdle at the Cheltenham Festival.

Those older than five years have tended to struggle here, with 2016 champ Educate taking the honour of being the oldest winner in the history of the race, having been seven years old at the time of his success.