Newmarket’s excellent July Meeting draws to a close on the Saturday, and good as the action is on the opening two days, the track really saves the best until last with this highly coveted Group 1 contest, the July Cup.

One of the main attractions of this race is the clash of the generations it represents. With the rejigging of the Royal Ascot sprints, this is really the first time the three year olds get to lock horns with their elders over this trip at the top level. First run back in 1876 this is now one of the most prestigious six furlong events in the world.

In 2011 Hayley Turner made history when winning this race onboard David Simcock’s Dream Ahead. In doing so she became the first female jockey to win a Group 1 outright after Alex Greaves dead-heated in the Nunthorpe Stakes way back in 1987.

Six furlongs is the trip for this high-class Group 1 sprint contest which offers total prize money of £250,000 this year. The going at the track is currently described as soft after a few days of fairly consistent rain.

Since the inauguration of the Commonwealth Cup at Royal Ascot, an added dose of intrigue has been added to this already excellent event, with the race now representing the first top class clash of the season between the best of the three year old sprinters and their older rivals. It has been an even split between the two groups in the past decade, with the three year olds and older horses winning five editions apiece.

As is so often the case in Group 1 events these days, it is Aidan O’Brien who boasts the best record amongst the trainers on show. Currently sitting level on five wins with Charles Morton and Vincent O’Brien, Aidan needs just one more success to claim the all-time lead as his own. However, the odds would suggest he may well be up against it, with his sole entry, Southern Hills, being amongst the rank outsiders for the race.

The market is generally a pretty good guide here, with the past 10 renewals seeing just the one winner return a double figure SP. Four market leaders have delivered over this period, handing favourite backers a level stakes profit of £2.75.

The past three editions of this race have been claimed by a three year old performer, and if that record is to be extended to four on the spin in 2020, then the horse most likely to do it is the Clive Cox-trained Golden Horde. Always held in high regard by a trainer who knows a thing or two about sprinters, this son of Lethal Force enjoyed an excellent juvenile campaign – scoring in Group 2 company – before twice being denied at the highest level by the unbeaten French runner, Earthlight.

Hopes were understandably high for this strapping colt headed into his three year old season, and it hasn’t taken him long to deliver. Making his seasonal return in no less a race than the Group 1 Commonwealth Cup at Royal Ascot, he delighted connections in posting a big career best to score from the highly rated US raider, Kimari. There will be those who point to him having been favoured by gaining a nice run up the near side rail that day, and whilst there may be some truth in that, he did look to hit the line with a bit left in the tank, which isn’t an easy thing to do in a Group 1 event. With Adam Kirby once again in the saddle, he seems likely to go close.

Bidding to strike a blow for the smaller yards is the Denis Hogan runner, Sceptical. This Exceed And Excel gelding has proven to be something of a fairy-tale horse for his Irish connections over the past couple of seasons, with his jet-propelled progress through the ranks having now taken him to the very top table. A 90 rated performer as recently as February this year, a string of hugely impressive wins see him now sitting on a mark of 116. That puts him only two pounds off the best of these, and he may not be done improving yet.

On the downside, his winning run did come up to an end when stepped into Group 1 for the first time at Royal Ascot last time out. However, he certainly wasn’t disgraced in going down by only half a length in the prestigious Diamond Jubilee Stakes. Looking the most likely winner deep inside the final furlong that day, he was only finally worn down in the final 50 yards in what was a cracking effort. A repeat of that effort would put him firmly in the mix here, and he can go close to handing Frankie Dettori a long awaited first win in the race.

Another must for the shortlist is of course Sceptical’s Diamond Jubilee conqueror Hello Youmzain, who goes for North Yorkshire-based trainer Kevin Ryan. Sired by strong speed influence, Kodiac, the four year old chestnut has proved to be a very consistent performer in winning five of nine career starts headed into this. Included amongst those five successes are Group race triumphs in each of his three seasons to date, as he has become one of the real flagbearers for his yard.

Having seen off the likes of The Tin Man, Brando, Dream Of Dreams and Invincible Army in Haydock’s Sprint Cup last season, Hello Youmzain was already proven at the top level ahead of his seasonal return in that Diamond Jubilee event, and therefore it wasn’t a huge surprise to see him assert his superiority when close to home. That did still rate as a career best effort to our eyes though, meaning he heads here right at the top of his game. One other major factor in his favour is that he has recorded Group level wins on ground ranging from good to firm to soft – undoubtedly a positive given the uncertain forecast in the lead up to the race.

About the July Cup: A World Class Sprint 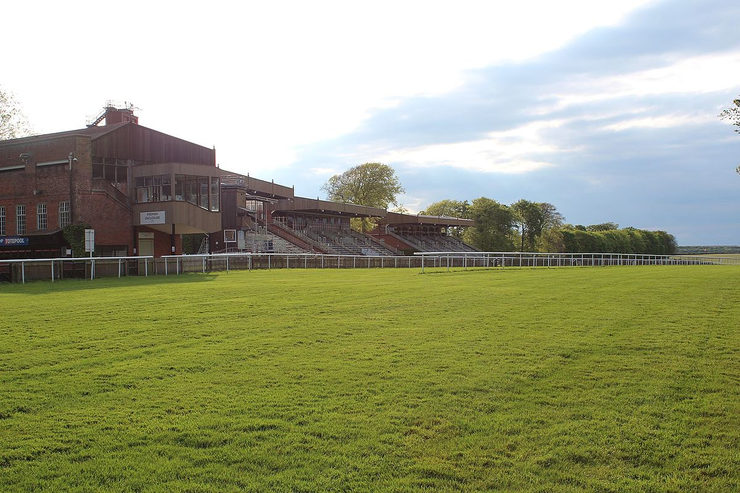 Newmarket’s three-day July Meeting is always one of the real summertime treats for racing fans, with each of the days having its high points in terms of a feature contest or two. For many though, this meeting really reaches its climax on the closing Saturday, with the full throttle six furlong contest that is the July Cup.

It is a Group 1 event open to all runners aged three and older, be they fillies, mares, geldings or colts. The race offers the opportunity to determine who really is the fastest of them all.

Offering excellent prize money – rising to £500,000 in 2019 (£250,000 in 2020) – the contest never fails to attract the best of the best, and has been won by many a sprinting superstar over the years, including the likes of Abernant, Oasis Dream and Muhaarar.

Afforded Group 2 status upon the introduction of the modern classification system in 1971, it took only seven years for the race to recognised for what it was: one of the classiest sprint contests of the season. Upgraded to a Group 1 in 1978, it has remained that way ever since.

The Global Sprint Challenge was a series of horse races from across the globe. Horses that competed in the races would gain points based on their performance in these contests, with the winner at the end of the season awarded the Champion Sprint Trophy. Not only that, connections of any horse winning three or more of the races in the series outside of their home country would be handed a $1,000,000 bonus.

Not only is the July Cup one of the top domestic sprint events, it’s inclusion in the Global Sprint Challenge initiative recognised it as one of the very best races of its type run anywhere in the world.

With top tier sprint contests from England, Australia, Japan and Singapore included in the challenge – and that huge bonus on offer for winning races in multiple jurisdictions – there was plenty of incentive for the owners of the top sprinting talent in the world to come together and lock horns.

The series was however fairly short lived. A dispute between Australia and Hong Kong regarding quarantine rules for travelling thoroughbreds led to the challenge being scrapped from 2018. The two have since resolved the issue, so the series could return in the future.

Whilst this race annually attracts runners of both sexes, and from the classic generation and above, they don’t quite compete on even playing field. The fillies and mares receive a three pound allowance, whilst the older runners concede six pounds to their younger rivals. As such the race – and almost all of the open-age races – does have its detractors as to how valuable it is in deciding who actually the quickest horse is, with many believing the younger performers in particular are offered an unfair advantage.

A look at the above chart – which shows the breakdown of winners by age since 1939 – would certainly seem to bear that theory out, with the three year olds having by far the biggest slice of the pie.

It certainly seems relatively safe to draw a line through any runner older than five years of age, with 2006 winner Les Arcs, being the only six year old to come home in front in the past eighty years (as of 2020).

The man who is viewed by many as the greatest trainer in the history of the game shares top billing in the all-time list here, as the legendary Vincent O’Brien sits alongside Aidan O’Brien and Charles Morton on five wins in the race.

In the early part of the 20th century, Charles Morton dominated, with his five wins coming in 12 editions of the July Cup between 1903 and 1914.  Morton sent out both Sunridge and Spanish Prince to claim top spot on two separate occasions. Having also won the race for his previous handler, it is the aforementioned, Sunridge, who is the only three-time winner of this since they first went under starters orders back in 1876. 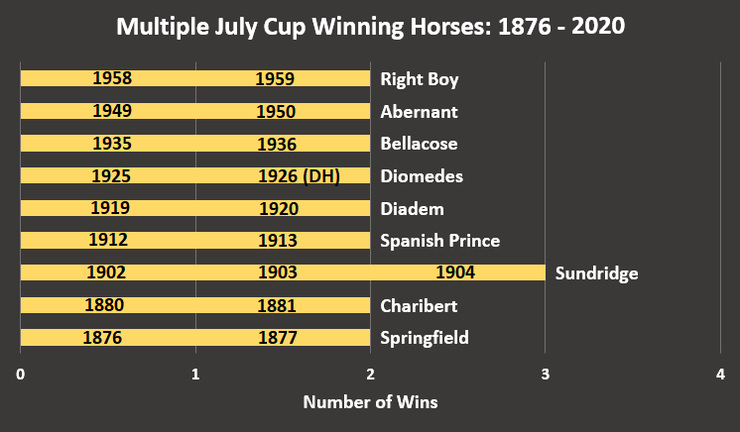 In the post-war era, the stand out trainers have been two unrelated Irishmen, Vincent O’Brien and Aidan O’Brien. 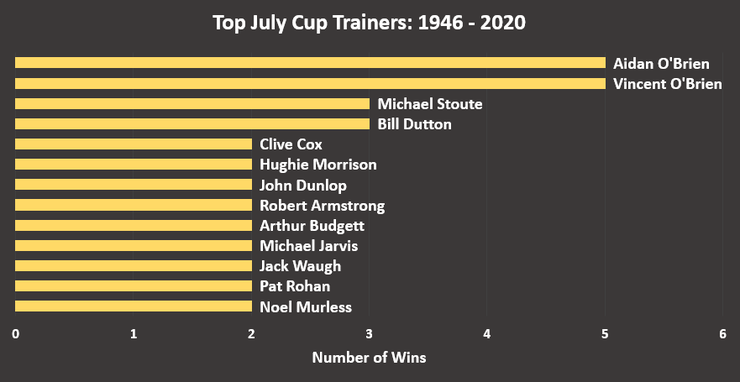 Unlike Morton, Vincent O’Brien achieved his success with five different horses. His first four came in just seven years between 1973 and 1979. It was then a 21 year wait before his fifth victory with Royal Academy in 1990.

Aidan O’Brien is perhaps more associated with runners over a mile and further, but his record with sprinters certainly shouldn’t be overlooked. Already sitting on five wins, and with a good few years likely left ahead of him, it wouldn’t be too surprising to see him overhaul his namesake to become the outright top trainer here.

Whilst Morton and Vincent O’Brien are in danger of being left behind at the top of the trainer’s tree, it may be quite some time before anyone gets anywhere the all-time most successful jockey in the race. That man is of course Lester Piggott, who is way out in front on his own with a phenomenal 10 wins to his name.