The Boxing Day meeting at Kempton may be headlined by the King George VI Chase but this Novices Chase is amongst the racing highlights in a packed day of racing.

First run in 1975, this contest was originally known as the Feltham Novices Chase before being renamed after the five-time King George winner Kauto Star in 2012.

Some top class horses have been victorious in this race before having glittering racing careers. In recent times these include Long Run and Coneygree who both went on to win Cheltenham’s Gold Cup.

The next race is scheduled to run on 26th December 2020. The race info, trends and tips shown below will be updated for the next renewal once the final declarations have been made.

Three miles is the trip for this Grade 1 chase, set to be run on soft ground this year and offering £100,000 in total prize money. This is far from the biggest race at Boxing Day but it is a fascinating top level contest for the novices and always one to keep an eye on.

Favourites have performed decently enough in this race across recent years, winning four of the last 10 renewals. Upsets like the one witnessed in 2016 when Royal Vacation stormed to glory are a rarity so do not be put off by Slate House’s fairly skinny price. In terms of the odds of recent winners he fits trends nicely enough and his trainer has also landed this twice since 2007.

Colin Tizzard, who was responsible for the shock 33/1 win three years ago, and for Joe Lively in 2007, has prepared his sole entry this year by testing him just shy of three miles at Huntingdon. Coping well with the increased trip, Slate House maintained his slender lead from the final jump to the line.

Critics may point to the fact he fell at Cheltenham one race earlier as a reason not to back him here but it would be unfair to hold that effort against him. Not only are the fences at the home of jump racing much stiffer than the ones found at Kempton but Slate House was travelling very strongly on soft ground prior to his late tumble. Clearly a horse happy to run in the mud, nobody stands a better chance of success this Thursday.

Boasting a record of four consecutive wins including two this year, the form book would suggest Danny Whizzbang is the horse to watch out for here. Paul Nicholls’ gelding does have a credible chance of extending his streak but this upcoming challenge will test his stamina significantly more than anything he’s faced previously. Soft ground at Kempton is by every definition soft so all our hopeful horses are in for an energy-sapping time, the reason why so many fall backwards after tackling the final jump.

Stamina to one side, Danny Whizzbang fans will point to the fact he’s won at Grade 2 before while many of his rivals are untested at such a high level. While this is true, his John Francome Novices’ Chase success at Newbury late last month hardly counts for too much. Reserve Tank, the odds-on favourite, ran flat after losing a shoe. This allowed Whizzbang to prosper with some ease, finishing the contest four lengths clear in the poorly attended, three horse race.

Also seeking a Grade 2 victory at Newbury in late November was Black Op, but the eight-year-old fell just a little short, never quite matching the pace of the winner, Nicky Henderson’s Champ. Still, to push the Sefton Novices’ Hurdle winner so far will give Tom George confidence, as will the outrageously easy win secured at Stratford four weeks earlier. Although it was not a particularly competitive contest, Black Op jumped exceptionally well on his chase debut on his way to a 15-length victory. This jumping ability will serve him well here with 18 fences to tackle and he’s one we expect to push Slate House all the way.

Master Tommytucker’s steeplechasing career could not have gotten off to a much worse start. Debuting in a low class affair at Chepstow, the seven-year-old was full of enthusiasm but perhaps a little too much as he ended up approaching the 13th fence far too quickly and subsequently failed to get anywhere near the level of elevation required.

Despite the rather awful mistake, it’s important to remember Paul Nicholls’ horse was travelling well prior to that and looked more than comfortable among Listed quality. Stepping back in class after, the eight-year-old won here at Kempton, just holding on in a Class 4 contest. A recent course win certainly won’t hurt his chances but a 2m 2f test doesn’t prepare him especially well for this far lengthier challenge, especially on testing ground.

Standing as our only credible long-odds options for this race is Fergal O’Brien’s Jarveys Plate, who, exactly like Danny Whizzbang, beat Reserve Tank by four lengths in a three horse race this season. Failing to build on such a solid debut, the chestnut gelding could only manage second from last at Haydock Park as he tired rapidly late on. Although he has competed over three miles back in his point-to-point days, this novice chaser hasn’t run close since, meaning it’s difficult to see him winning over this sort of distance.

Boxing Day at Kempton Park racecourse will of course forever be associated with one of the most famous National Hunt contests of the year, in the shape of the jumping and staying giant that is the King George VI Chase. Every feature event needs a quality supporting cast though, and topping the bill in that regard at the festive offering from the Sussex venue is this Grade 1 event for the novice chasers.

Open to chasers aged four and older, and held over a trip of three miles, this event first took place in 1975 when coming into being as the Feltham Novices Chase – Feltham referring to the nearby town of that name. As nice as Feltham undoubtedly is, it doesn’t have quite the racing relevance ascribed to one of the greatest chasers in the history of the sport. A superstar so good that he won the King George VI Chase on no fewer than five occasions. That horse was of course the mighty Kauto Star. Having first had his name added to the title of the race in 2012, the contest was then officially named in his honour in 2013. 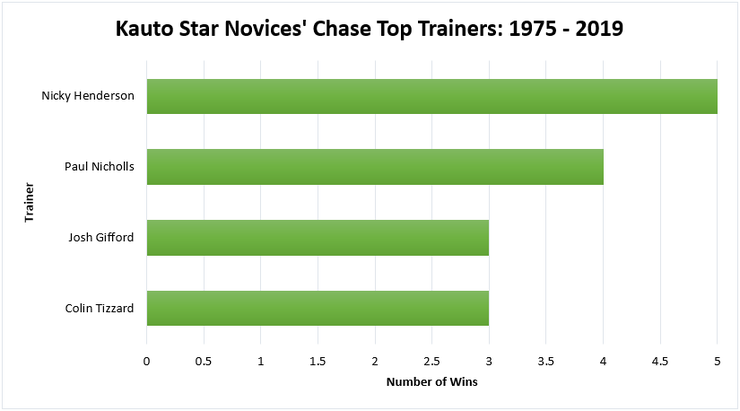 With 16 British trainers’ titles between them, it is never too surprising to see the names of perennial rivals Nicky Henderson and Paul Nicholls towards the head of the trainers table for any given National Hunt contest, and it is they who are out in front here.

It is Nicky Henderson who just leads the way at present, with the pick of his five winners to date being subsequent Cheltenham Gold Cup and King George VI Chase winner Long Run, who came home in front in 2009.

Considering Paul Nicholls was the trainer of the magnificent chaser in whose honour this contest is named, it would be somewhat apt were he to hold the record for the most wins by a trainer. Only one behind Henderson as of 2019, he may yet get his nose in front in due course.

As impressive as the exploits of the trainers, and of course the horses themselves has been in this race, one of the main reasons that the event will forever be remembered in the history books concerns the winning rider in the 2015 edition of the contest.

That rider was Lizzie Kelly whose success aboard the Nick Williams-trained Tea For Two made her the first female rider to win a British Grade 1 event in the history of the sport. 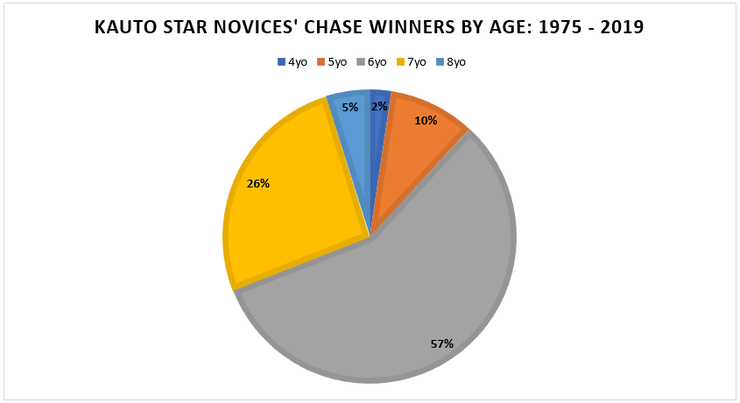 Open to all novice chasers aged four years and older, it is the six year olds who boast much the best record in this race in terms of numbers of wins, with over half of the editions to have been run to date being landed by a runner from that age bracket.

The aforementioned Long Run (2009) remains the only four year old (as of 2019) to come home in front – indicating that it takes a pretty special individual to be ready for this challenge at so young an age. Von Trappe (1985) and Joe Lively (2007) share the distinction of being the oldest winners in the history of the event (again as of 2019), having been eight years of age at the time of their success.