Founded to commemorate the coronation of King George V in 1911, this race has long been a regular fixture at Goodwood. Horses aged three-years-old and up are eligible to compete but different weights apply depending on age, sex and previous Group level wins.

Prominent runners in the race sometimes go on to feature in next month’s Nunthorpe Stakes although Battaash in 2019 was only the second horse to do the double since Lochsong in 1993, having tried and failed in the second leg twice before. Battaash further created history with his victory in 2019, becoming the first horse to win the King George on three occasions.

The Goodwood Festival is full of historic races, including the King George Stakes. This five furlong sprint dates back to 1911 and throughout its history it has attracted a selection of the best sprinters around. This year’s renewal sees seven runners aiming to win their share of the reduced purse of £120,000.

When researching a race to try and find a good bet, many people turn to previous renewals to see which of the current runners match the race trends. The problem with doing that for the 2020 edition of the King George Stakes is that the horse who has won the last three renewals happens to be the odds-on favourite this time around.

Few horses have enjoyed running at Goodwood more than Battaash. He is a legend of the West Sussex track and is very much expected to extend his record breaking run in the King George. There is more to Battaash’s success in the race than just out and out pace. Horses don’t have to cope with the unique Goodwood bends over five furlongs but they do have to get into the right position through the middle of the track. They also have some undulations to cope with so it’s a tricky course even for sprinters and several have been caught out over the years.

Goodwood has already been glorious for some real stars of the Flat before Battaash’s appearance in the King George Stakes. Stradivarius proved, once again, that he is the star performer in the staying division on the first day of the meetings and on Friday it’s the turn of Battaash to do likewise in the sprinting division.

Battaash is incredibly popular in West Sussex and beyond. His win in the King’s Stand Stakes at Royal Ascot was warmly welcomed throughout racing as he had been the nearly horse behind Blue Point two years in a row. With that horse’s retirement, Battaash was able to win the King’s Stand Stakes with relative ease in his most recent appearance. Although he didn’t have to put in his very best effort to win, the Hamdan Al Maktoum-owned six year old showed blistering speed to leave his opponents behind him.

The ground at Ascot was officially good to soft but was changed to good immediately after Battaash’s success. He was much happier on a firmer footing than he’d have been if there really was any cut in the ground and will relish the conditions at Goodwood as the ground firms up during what is set to be a backing hot Friday. With everything going in his favour it is little surprise that Battaash is available at a best price of 1/3 and it is tough to see any of the other horses in the field from stopping the favourite from earning a fourth King George Stakes win.

Ahead of the King’s Stand Stakes, Kevin Ryan was talking up the chances of Glass Slippers playing a leading role in affairs. She made some serious steps forward towards the end of her three year old campaign and Ryan was bullish that she’d be able to give her best running at Royal Ascot without requiring a warm up run.

Unfortunately, the draw at Ascot made things too difficult for this undoubtedly talented and super-speedy filly. She plugged away all the way to the line but was unable to make an impact and could only finish fifth. The bookies have Glass Slippers as more of an outsider than Liberty Beach who finished third in the King’s Stand but there is every chance that Ryan’s four year old will reverse the form from Ascot.

Glass Slippers’ sole run at Goodwood to date doesn’t look much on paper (she finished sixth of 17 in a maiden), but have a look at the race and it is obvious that she was seriously impeded when trying to launch her challenge. Some judges believed that she would have gone on to win that day had things panned out better for her and the run certainly caught the eye. She’s now a more experienced and a quicker filly and the King George Stakes could be the perfect stage for her to give her best so an each way bet at 8/1 looks more than generous.

About the King George Stakes 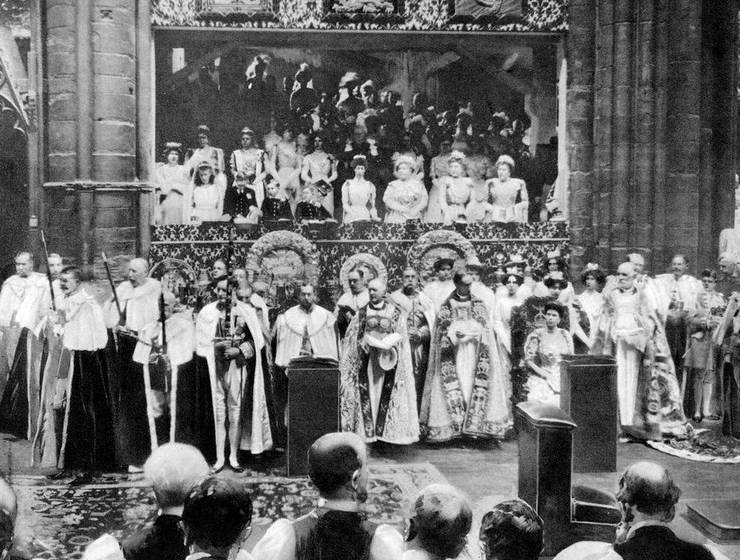 The Coronation of King George V, image via Wikimedia Commons

Of course the National Hunt race at Kempton on Boxing Day, the King George VI Chase, adds another bit of confusion for some punters, but that’s a different kettle of fish altogether.

The creation of the King George Stakes, rather unsurprisingly, dates back to the reign of King George, but that would be King George V rather than the later monarch after whom the other two mentioned races were named. During the year of George V’s coronation in 1911, the sprint was established in the monarch’s honour.

The race has undergone few major changes since although there are now various allowances and penalties in place. The Group 2 contest sees fillies and mares given a three pound allowance while former Group 1 and Group 2 winners are handed a five pound and three pound penalty respectively. This only applies however if the Group win came during the current, or previous season.

NOT UP TO THE NUNTHORPE

It’s a natural progression for leading King George performers to head towards the Nunthorpe Stakes at York later in the season. Only a slight step up in grading and run over the same distance, you might expect many horses to enjoy success in both races. This has absolutely not been the case however in recent years with only Battaash in 2019, Ortensia in 2012 and Lochsong in 1993 winning both contests in the same season in over 30 years. Many King George champions have found themselves well up the betting for York’s Group 1 contest but more often than not they’ve fallen a fair way short of expectations. 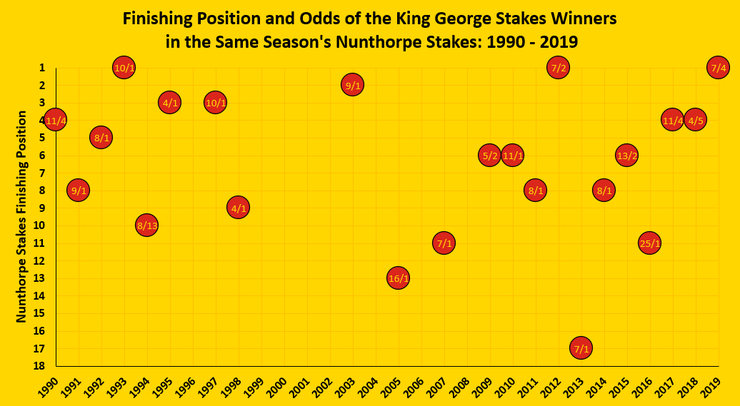 A RACE OF FAMILIAR FACES

Take Cover is one of the best examples of horses coming back for more in this race with him featuring in all five renewals between 2014 and 2018. On his final effort, the bay gelding ran alongside former champion Muthmir who was making his third King George Stakes appearance.

As you can see below, in recent years horses who have already run in this race are only just outnumbered by those making their debut. 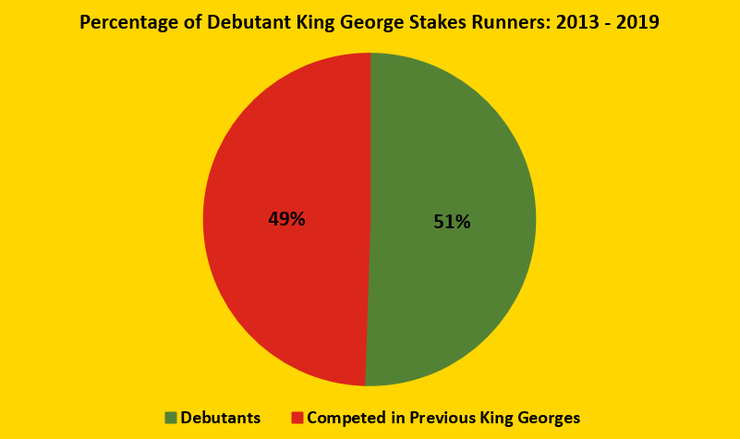 The most important thing to take away from the data above is that while horses do often come back for more in this contest, their first effort is often their best. This is certainly true of winners with nine of the last 13 King George champions winning on their first appearance in the race. The well-travelled mare Ortensia is the only winner who didn’t try their luck again in the race, retired to stud before they had the chance.

The King George stakes was one of the biggest beneficiaries of the 10-year partnership between Goodwood Racecourse and Qatar. The deal, which commenced in 2015, brought a further £2m in investment over the course of Glorious Goodwood, with a promise of this being increased year on year.

At the time it was the largest sponsorship ever made for the benefit of British racing. Eight key races enjoyed a big cash injection and for the King George Stakes, its prize fund tripled from £100k to £300k. This figure will increase to £500k should the race be granted Group 1 status. In 2020 the prize fund for the King George dropped to £125,000 with the meeting held behind closed doors. 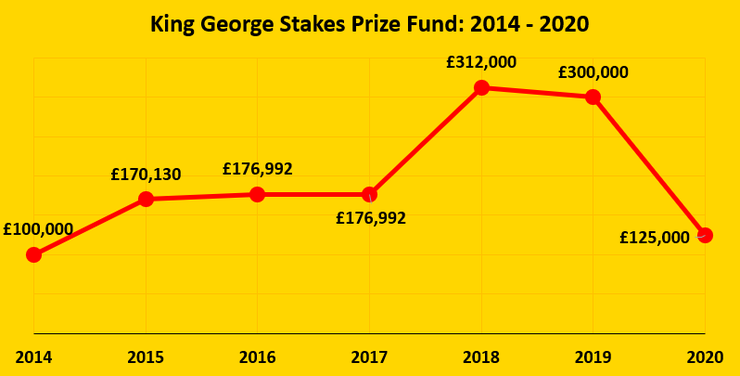