There’s plenty to look forward to on the opening day at Royal Ascot, with no fewer than three Group 1 contests in the first four races alone. Each of these top level affairs has its individual selling points, but in terms of sheer speed and adrenaline, it’s hard to top this “blink and you’ll miss it” sprint.

The King’s Stand first took place in 1860 during the reign of Queen Victoria when it was known as the Queen’s Stand Plate and was ironically won by Queen Of The Vale. The race became the King’s Stand in 1901 with the crowning of King Edward VII following the death on Queen Victoria.

The prize money available at Royal Ascot is unparalleled in British flat racing. The lack of fans for this year’s meeting has had a major impact on the amount of prize money however with all the big races seeing around a 50% reduction, but there is still £250,000 up for grabs in the King’s Stand Stakes.

This Group 1 affair is up there with the most prestigious sprints of the entire season. It is open to horses aged three and older and regularly attracts the best sprinters around. That is the case once again, and even though the field lacks the usual high class international raiders it still looks like it could be a cracking renewal.

The King’s Stand Stakes is the fastest run race of the week at Royal Ascot. Every year, a collection of top class sprinters push their rivals all the way to the finish over five furlongs. As touched on above, this is a race which usually includes several international horses. That adds a certain amount of unpredictability to the betting markets with winners at 22/1, 20/1 and 12/1 in the last 12 years.

The trend for higher priced winners has been dented in more recent years. Each of the last four winners were inside the top three of the betting even if Blue Point, winner of each of the last two renewals, wasn’t the favourite in either race.

The list of official ratings of the most recent King’s Stand Stakes winners serves as a very good shorthand for the calibre of the race. None of the last 10 runners had a rating under 110 with Lady Aurelia topping the ratings at 121 in 2017.

One of the most notable attributes of the King’s Stand Stakes is the number of horses who return to compete in the race from the previous year. That always adds some very interesting storylines ahead of the race with last year’s build up dominated by the impending battle between Blue Point and Battaash.

The former got the better of the latter in 2018 (when Lady Aurelia was the favourite) and then did so again last year even though Battaash was a well-supported favourite with punters. Having missed out on both occasions there is a feeling among many racing fans that Battaash is owed a win in the King’s Stand Stakes but we all know that you can take nothing for granted in horse racing, especially at this level.

Despite his two defeats and the fact that he has never won at Ascot, Battaash’s position at the head of the betting for this year’s renewal is understandable. Whether he represents value at a general price of 4/6 is another matter entirely. It would be a great story for all connected to Battaash were he to finally break his Ascot hoodoo but at the odds it just makes sense for punters to look for better value in the markets.

Glass Slippers is second only to Battaash in the betting and she has every chance of getting the favourite beaten at a very nice price. Few would have believed that she would feature so prominently in the betting for the King’s Stand Stakes when she missed Royal Ascot last year and instead ran in the Listed Land O’Burns Fillies’ Stakes at Ayr. That impressive run was the start of things taking a real turn for the better though and Glass Slippers deserves the attention she’s getting for this contest.

She didn’t win that day at Ayr but didn’t get the best of the ground unlike the winner and would surely have nicked it given another couple of strides. Although she was unable to build on that run with a win next time out over six furlongs she did exactly that over that trip in the Listed Prix Club Hipico Santiago. She then had absolutely no problems with a return to five furlongs to win at Group 3 level in the Prix du Petit Couvert on good ground at Longchamp and showed yet more versatility with a Group 1 win in the Prix de ‘Abbaye de Longchamp Longines on very soft ground.

What was perhaps most impressive about that first Group 1 success was the way that Glass Slippers was able to overcome a sluggish start to get right into contention and eventually take the race away from her opponents inside the final furlong.

Kevin Ryan was obviously delighted with Glass Slippers’ performances last season and has suggested that she’s even quicker as a four year old. He also claimed that she doesn’t need a competitive warm up run to be right back up there at her best so she is a very interesting option at 4/1.

Ballydoyle have had some incredible horses over the years but they’ve also had their fair share of frustrating horses who have all the required class but just cannot string it together consistently enough. Sergei Prokofiev is one such horse.

The expensively acquired, Canadian-bred horse had threatened to be a real star during his juvenile campaign but his form tailed off and it quickly became clear that his Classic hopes had gone. Just when racing fans were starting to write him off, this son of Scat Daddy rediscovered something as a sprinter.

His most recent performances (which include never featuring in last year’s renewal of the King’s Stand Stakes) have been poor, meaning that he is as big as 33/1 for his Royal Ascot appearance. That price reflects how difficult he can be but there is still something there and he will like the ground if the rain really falls so may be worth supporting each way for small stakes.

About the King’s Stand: The Day One Dash 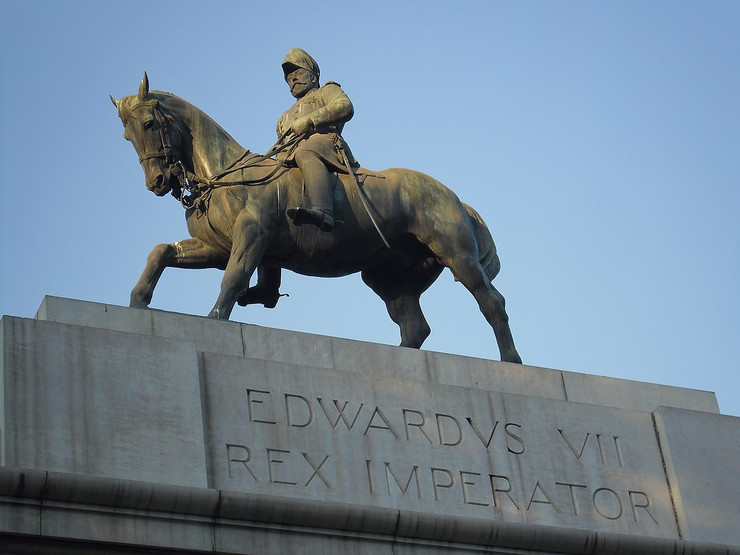 There are many reasons to complain about British weather but without it we’d not be able to enjoy the King’s Stand Stakes every year. The race only formed when heavy rain made it impossible to run the two mile Royal Stand Plate at Ascot in 1860. Still needing something to entertain the crowd, organisers shortened the contest to five furlongs as no more of the course was useable.

The success of the inaugural race meant that the newly formed sprint race instantly became a regular fixture at Ascot. Before too long it was the most important sprint of the Royal Meeting. Back then it was known as the Queen’s Stand Plate but the death of King Edward VII provoked a name change in 1901. It remains as a major player of Royal Ascot and is available to all horses aged three and above.

The King’s Stand Stakes has regularly had decent international presence, primarily thanks to its involvement in the Global Sprint Challenge. It first became part of the series in 2005 alongside five other races. By being able to attract a high calibre of horses from overseas, three years later the King’s Stand Stakes regained the Group 1 status it lost in 1988. In the challenge’s final incarnation in 2017 it stood as the fifth leg in the series and was one of three races to feature on British soil, the Golden Jubilee Stakes and the July Cup being the other two.

While fantastic news for the race itself, British horses have not fared too well since the creation of the Global Sprint Challenge. Winners have originated from all over the globe with locally trained horses struggling to enjoy anything in the way of a home advantage. The chart of winners below highlights just how well overseas contenders have fared in this Group 1 event. It’s unclear if the trend will continue however as in 2018 the Global Sprint Challenge was suspended following a quarantine dispute between Australia and Hong Kong. 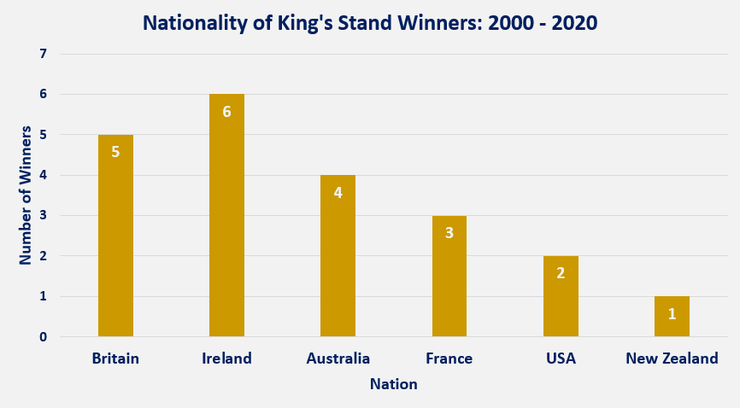 On a straight track with plenty of space and little draw bias, the King’s Stand Stakes offers all horses a very fair test of their ability. There is an uphill climb towards the line at Ascot but this has not prevented horses from consistently recording impressive times in more recent years. In the 18 renewals before 2005, when the race temporarily moved to York, only five horses clocked a winning time under a minute. Since moving back to Ascot in 2006, Profitable is the only winner not to break the 60 second barrier, though that was on soft ground.

DON’T BLINK AT THE FINISH

Regularly able to attract a large field of high class sprinters, this is a race often decided by the finest of margins. The fact that runners will head to either the far or near rail only make judging who is ahead an even harder task. We’re yet to see a dead heat during the race’s long history but regularly there is only a split second separating the horse leading the pack. Goldream’s victory in 2015 is the most slender of recent renewals. The 20/1 shot edged out Medicean Man by a short head with Muthmir just a neck’s length behind. 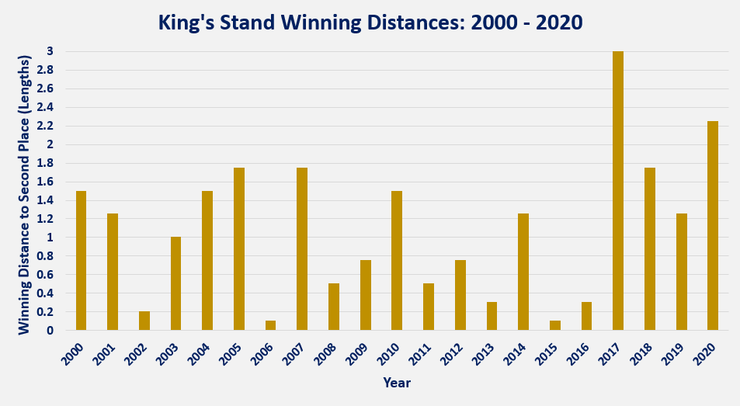