Glorious Goodwood beins on a Tuesday and helping the opening day live up to expectations is the Lennox Stakes. This seven furlong race is named after the Duke of Lennox, one of the dukedoms held by course owner, the Duke of Richmond, Charles Gordon-Lennox.

The Lennox Stakes was first run in the year 2000 and replaced the Beeswing Stakes which took place at Newcastle. Initially a Group 3 contest, this was promoted to Group 2 in 2003.

The first winner in 2000, John Gosden’s Observatory, went on to win the Queen Elizabeth II Stakes at Ascot later that season. Observatory sired Twice Over, a two-time Champion Stakes winner with both running in the famous colours of Khalid Abdulla.

7f is the trip for this Group 2 event which takes place on the opening day of the Glorious Goodwood festival, and offers total prize money of £100,000. The going at the track is currently described as good.

One of the big highlights on Day 1 at Glorious Goodwood, this race is open to all runners aged three and older. There has been a definite trend towards the younger runners in the history of the race to date though, with 13 of the 20 previous editions having been claimed by a runner aged either three or four. Only one horse older than five has ever come home in front.

Two has been the magic number for records in this race, with no horse, trainer or jockey having landed the prize more than twice. Should Sir Dancealot win this year, he will catapult not only himself, but also trainer David Elsworth and Jockey Gerard Mosse into the record books as three-time winners of the race.

This contest has witnessed the odd shock result over its lifetime, with Breton Rock’s 50/1 success in 2017 being a recent example. Overall though this has been a decent race for the market leaders – the past 10 years seeing six winning favourites or joint favourites, handing supporters of the jolly a healthy level stakes profit of +£6.88.

As mentioned, this has been a solid race for the market leader in recent times, and this year the one to carry the cash of favourite backers is the Charlie Appleby-trained, Space Blues. Appleby does also send D’bai into battle, but the compilers would look to have it right in rating this son of Dubawi as the most likely winner from the two Godolphin runners.

As a four year old, this four time distance winner fits nicely into the age trend for this race, and arrives in excellent form having landed each of his two most recent starts, including when seeing off the aforementioned D’bai last time out in a Group 3 at Longchamp.

Detractors may point to the fact that he was zero from four in Group company headed into that race, but having finished a one length third to Advertise, and a three length second to Too Darn Hot in his two efforts at Group 1 level, it’s tough to argue that he isn’t up to this grade. Thoroughly at home on both good and good to soft going, the small amount of rain in the area won’t bother him at all and he looks likely to go close under William Buick.

Also arriving with solid claims on the form book is the John Quinn-trained, Safe Voyage, who was last sighted landing the Listed Scurry Stakes at Epsom in really good style – taking his tally of wins over this 7f trip to an impressive 9. Like Space Blues, this Fast Company gelding will be making his first appearance at Goodwood here, but if you can handle Epsom you can handle anywhere and it is tough to see him not handling the track.

Also in common with the market leader, Safe Voyage has previously placed in Group 1 company having finished third in the Queen Elizabeth II Stakes at Ascot last season. Also a winner at Group 3 level in the past, he looks up to this level and has only a neck to find with Space Blues on their running in the Spring Trophy at Haydock earlier in the season.

There is however one negative about this one, and that is his age. At seven years old, he would become the joint oldest winner in the history of the event if coming home in front, but if we put that trend aside, he would look to boast an excellent chance of at least making the frame.

Another who certainly can’t be ruled out is of course the two-time Lennox Stakes hero, Sir Dancealot. As a six year old, the most talented son of Sir Prancealot is again a far from ideal fit on the age trend, but it’s hard to argue with his record at this track. Whilst age does undoubtedly catch up with us all eventually, he has shown enough in his two starts so far this season to suggest he may be up to putting up a bold defence of his crown.

Much like 12 months ago, the David Elsworth runner heads into the race on the back of two successive defeats – a fact which certainly shouldn’t count against a horse who generally takes a couple of runs to come to the boil.

His fourth behind Limato on his seasonal return was a promising enough effort, particularly as he didn’t enjoy the clearest of runs that day. He also did well to finish as close as he did, despite being stuck out wide and away from the main action, in the July Cup last time out over an inadequate 6f. As a hold-up performer he is always going to need to find a gap at the right time, but he has smuggled his way through in each of the past two seasons, and will have plenty of supporters to do so once again under Gerard Mosse.

About the Lennox Stakes: Seven Furlong Sizzler at Glorious Goodwood

One of the great things about the British flat racing season is the multitude of spectacular festivals on the fixture list. June may belong to the Royal Ascot spectacular, but in late July/early August each year it is the Sussex venue of Goodwood which takes centre stage with the five-day Glorious Meeting.

Group race contests are sprinkled generously throughout this outstanding festival, with one of the highlights on the opening Tuesday being this Group 2 affair held over the specialist trip of seven furlongs.

The “Lennox” of the races title refers to the Duke of Lennox, which is one of the titles held by the owner of Goodwood racecourse. Known as the Betfair Cup between 2004 and 2010, fellow betting firm bet365 have also lent their support to the race over the course of its lifetime. The backing of Qatar for the Goodwood Festival as a whole has resulted in a significant increase in prize money, with this race offering a total purse of £300,000 in 2019 though as with many flat races, this was reduced to £100,000 in 2020.

Open to all runners aged three and older, the race is a relatively new addition to the Glorious Goodwood roster, having first been held in the year 2000. In common with most Group 2 events, there are penalties in place for previous wins at Group 1 (five pounds) or Group 2 (three pounds) level. Three year olds receive seven pounds from their elders, whilst the fillies and mares receive an additional three pounds from the colts and geldings.

An Even Playing Field 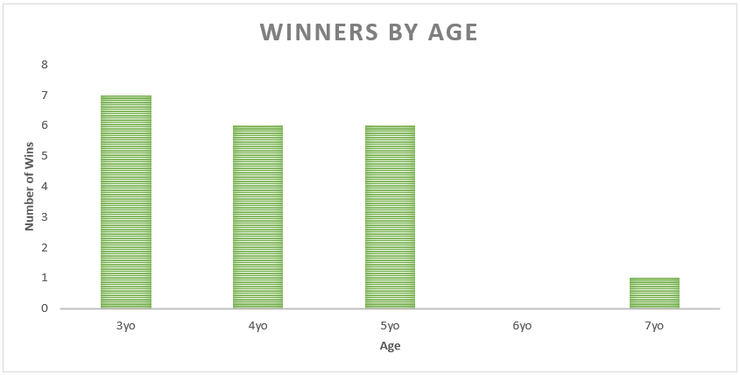 There are times of the season when the three year old performers are thought to be at an advantage due to the weight allowance they receive in these open group class events. That doesn’t really seem to the case here though. The three year olds do boast the most wins as of 2019, but there really isn’t much in it, with both the four and five year olds only one win behind.

It would however appear that it is difficult for those older than five to make their presence felt. Special mention must therefore go to 2017 champ Breton Rock, who at seven years of age was the oldest winner in the history of the event.

No doubt this stat may change before too long, but one interesting trend across the opening 20 editions of the contest, is that whilst there are multiple trainers, jockeys and horses to have won the race twice, none have yet managed a third victory.

A Stepping Stone To Group 1 Success

For many previous winners, success in this race has been the standout victory of their career. There is no shame in that, of course, with this being a major Group class contest at one of the biggest festival of the season. There are however others who have gone on to prove themselves at the very top level.

For instance, 2005 champ Court Masterpiece seemed to have a particular affinity for Goodwood, with four of his seven career successes coming at the venue. Those wins included a victory in the Group 1 Sussex Stakes in 2006. Inaugural winner Observatory meanwhile went on to become a dual Group 1 winner in the Queen Elizabeth II Stakes and Prix d’Ispahan.

Possibly the pick of the bunch though was Richard Hannon Senior’s 2008 hero, Paco Boy. In addition to a Group 1 hat-trick in the Prix de la Foret, Queen Anne Stakes and Lockinge Stakes, Paco Boy also went on to significant success at stud – siring 2,000 Guineas winner Galileo Gold (who triumphed in 2016).