The third day of the four-day Ebor Festival at York maybe headlined by the Group 1 Nunthorpe Stakes but for many the Friday highlight will be this race for the stayers.

The Lonsdale Cup was introduced in 1980 and has become one of the top long distance flat races in the calendar, making up part of the QIPCO British Champions Long Distance Series.

In 2018 John Gosden’s Stradivarius secured a £1 million bonus when winning the Lonsdale Cup in the same season as winning the Yorkshire Cup, Ascot Gold Cup and Goodwood Cup. This feat was repeated by Stradivarius in 2019 to claim a second successive Weatherbys Hamilton Stayer’s Million bonus, and his place amongst the great long distance competitors.

There has been a good deal of rain in recent days but things dried out a little on Thursday so we should have good ground. There are 7 going to post at the time of writing, with a handy £100k up for grabs.

The last two editions of the Weatherbys Hamilton Lonsdale Cup Stakes have been hugely lucrative for connections of the brilliant Stradivarius. Victory in 2018 and 2019 saw the superstar stayer pick up the £1 million Weatherbys bonus but there will be no repeat this year as he takes a different route. That opens the race up to a combination of experienced and younger stayers, all of whom are looking for a breakthrough win at this level.

It is tough for younger horses to crack the top of the staying division. It’s not particularly surprising, therefore, that not a single three-year-old has been entered for the Lonsdale Cup despite the generous weight allowance afforded to them. At the other end of the scale there are four horses aged seven or older in the field for Friday’s race. That cohort have a lot to do if the race trends bare out once again as you have to go back to Sergeant Cecil back in 2006 for the last time that a horse older than six won this race.

The stats show that recent winning form is not a necessity for the Lonsdale Cup, as long as horses have had a decent test inside the last six weeks or so. Trainers know there is a fine line to tread between fitness and freshness when it comes to a big staying race like this but any horse who has had too long away from the track can pretty much be discounted. Similarly, relatively few recent winners arrived at York with a Group level win to their name, reinforcing the idea that this is a race for horses who are still improving.

Racing fans want to see Stradivarius strut his stuff at every possible opportunity but there was not a hint of disappointment at the Mark Johnston yard when the news broke that the leading stayer would not be competing at York. Nayef Road has made some serious steps forward as a four-year-old but found Stradivarius too good in each of his last two races so his absence has raised hopes at the yard.

Nayef Road’s first run of the season came in the rescheduled Sagaro Stakes which took place on the all-weather at Newcastle for the first time. It was also his first attempt on the all-weather but he took that challenge in his stride to win a race that was perhaps lacking in genuine top class staying talent. He then went on to beat every horse he faced in the Ascot Gold Cup and the Goodwood Cup except for Stradivarius.

The quality of Nayef Road’s runs this season suggest that he is going to pick up a Group level win before too long. Given that he is a straightforward sort, the likes of which Johnston has had much success with, and that he has run well in various underfoot conditions, that win could well come right here in the Lonsdale Cup.

When it comes to preparing Dashing Willoughby for the Lonsdale Cup, Andrew Balding has taken a cautious approach. He kept his four-year-old away from Glorious Goodwood to ensure that he would be fresh for his first trip to York and if his resurgent form this summer is anything to go by that may well be an approach that pays dividends.

Dashing Willoughby was on many people’s trackers during his three-year-old campaign and he rewarded that support with victory in the Queen’s Vase at Royal Ascot. It was all a bit more of a struggle from then on though and he ended the campaign without another win. Connections were content to make excuses for that lack of a victory but took decisive action by gelding him in October.

A newly focussed Dashing Willoughby reportedly wintered well and has looked highly progressive as a four-year-old. Victory over 1m4f in the Listed Buckhounds Stakes was a very pleasing start from which he improved further still when winning the Henry II Stakes over 2m at Sandown at the start of July. He’ll need to take another such step forward to have a chance of winning the Lonsdale Cup but that looks to be within the capabilities of this versatile and hardy performer.

About the Lonsdale Cup: One of the Highlight’s of York’s Ebor Meeting

The Lonsdale Cup is a flat horse race which is run at York racecourse. The two mile race is run in August of each year and is open to horses aged three years and over. The Lonsdale Cup is held on day three of the four day Ebor Festival meeting, and the most successful horses who compete are often seen shortly after in September’s Doncaster Cup which is just over one and a half furlongs longer in distance.

The event first took place in 1980 under the title of the Lonsdale Stakes, and was run over a distance of one mile, seven furlongs and 198 yards; the inaugural contest was won by the horse Heighlin. For many years the contest was classed as a Listed race, before being promoted to the status of Group 3 in 1998. Upon another class change in 2004, when the race was upgraded once again to a Group 2, the race was renamed the Lonsdale Cup. The distance was extended by another 78 yards to its current length in 2007.

In 1994 Cuff Link was past the post first, but was relegated to second place after a stewards’ enquiry. The event was abandoned in 2008 as the course was too waterlogged for the runners to compete.

The Ebor Festival is one of the biggest in the flat racing calendar, and as such it attracts the very best of jockeys and trainers alike to the racecourse. This is evident from the list of winning jockeys such as Richard Quinn, Darryll Holland and Silvestre De Souza. However these famous jockeys are nowhere near the record held by Pat Eddery and Frankie Dettori. The champion jockeys have ridden five winners each, covering over 36 years between the two of them, from Eddery’s first win in 1983 on Crusader Castle to Dettori’s latest win in 2019 on Stradivarius. This fine 2019 winning horse also ran the course in the fastest time yet since the 78 yard distance extension in 2007, running the race in 3:27.82

The leading trainer in the event to date is John Dunlop having first struck success in 1994 with Angel City, and finishing his tally on five wins in 2012 with Times Up. Mark Johnson, David Elsworth and Barry Hills are the three closest to his record with all on three wins in the competition at the time of writing.

There are many aspects that need to be assessed when choosing a winning horse in the Lonsdale Cup. First of all the horse needs to be bred for, and have previously run over, the same distance as many horses who enter into races of this length and class simply cannot stay the distance. Another aspect when regarding the distance is the weight the horse carries; there is a 10 pound difference between three year olds and those aged four and over, not to mention the three pound allowance for fillies and mares, and the three pound penalty for previous Group 1 winners. When running a distance of two miles the weight becomes a much bigger factor than in sprint races.

When looking at trends we can see that since the distance was changed in 2007, it has basically eradicated the older runners from claiming first place as can be seen in the chart below. From 2007 to 2019, 75% of the races have been won by four or five year olds, with the remaining 25% coming from six year olds. In the nine years prior to 2007, 56% of the races were won by seven or eight year olds. This really is a staggering statistic as the addition of a mere 78 yards seems to have changed the winners’ profile to a significant degree. 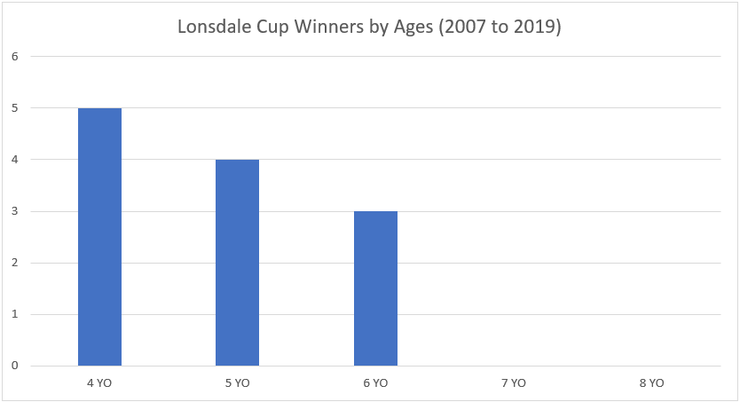