Some runners in this contest have gone on to win some of the biggest National Hunt races. Notable winners include Wayward Lad who was a three time King George VI Chase winner during the 1980’s. Best Mate was also a former Mersey Novices’ Hurdle winner, going on to win a hattrick of Cheltenham Gold Cups between 2002 and 2004.

About the Mersey Novices’ Hurdle 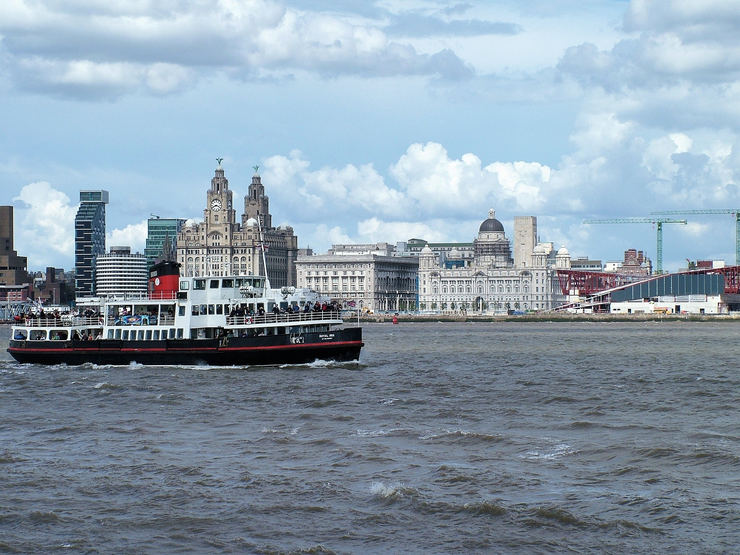 The Mersey Novices’ Hurdle is a National Hunt race which is run at the Grand National meeting at Aintree at the start of April every year. Having had its inaugural run in 1977, the race was upgraded to a Grade Two event in 1991, then from 2014 onwards it has been classified at its current Grade One status. The contest has 11 hurdles over the entire course and is for horses aged four years and older. The horses also must be novices, meaning that they cannot have won a race of this type before the current racing season.

The race has many similarities to the Ballymore Novices’ Hurdle which is run at the Cheltenham Festival in the previous month. This means that there is often largely a similar field within the two races, so reflecting upon the results of that race can give many indicators as to how the horses will fare in the Mersey Novices’ Hurdle. The last horse to have achieved success at both races was Yorkhill in 2016, and before that it was Simonsig in 2012 who pulled out all the stop to achieve that honour.

Throughout the years this prestigious race has attracted the very best within the world of National Hunt racing, and the list of winning jockeys does not disappoint. Many a champion jockey has achieved first place at one time or another, but it is none other than Ruby Walsh who holds the accolade of most wins in this highly competitive contest. Mr Walsh has achieved success no less than four times between the years of 2004 and 2015. That is one more win than Tommy Carmody who managed three wins consecutively between 1979 and 1981. 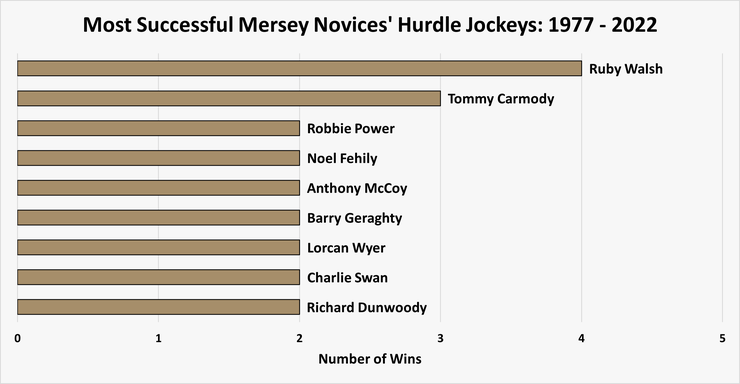 Regarding the successful trainers within this National Hunt race, it is just as impressive. Paul Nicholls has achieved four wins from 2004 to 2014. Three of these were under the guidance of the record holding jockey, Ruby Walsh. This is equal to Martin Pipe’s record of four wins from 1996 to 2002. Though Paul Nicholls is the only one of the two still plying his trade today, meaning he may yet get the fifth win to take him through as the top performing trainer for this highly prized Aintree race.

Reflecting upon the results it is very easy to see a trend appearing, as can be seen in the chart below. Between the years 1977 and 2022 there was a substantial trend in evidence showing that horses aged five or six years old tend to come away with first place. In fact, a whopping 73.3% of horses who won the race from 1977 to 2022 had been within this age range. Furthermore, you can see that horses aged five years old have claimed the honours 40% of the time. Surely these are statistics that cannot be ignored when making your choice of those among the field. 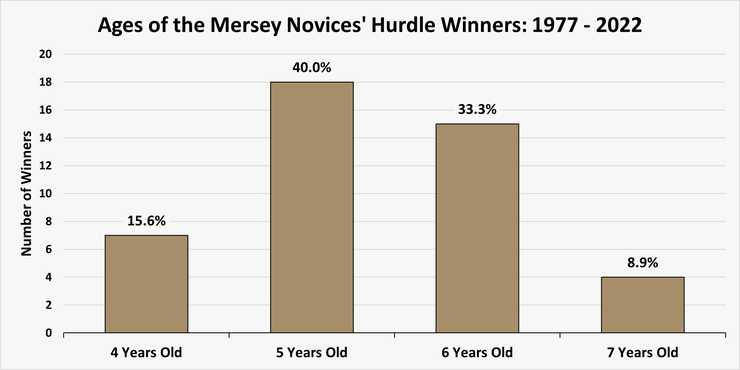