Saturday’s card at Newmarket’s Cambridgeshire Meeting may boast the historic Cambridgeshire Handicap as its headline act, but we do also have not one, but two excellent Group 1 contests on the card. The first is the fillies’ Cheveley Park Stakes and the second of which is this event for the juvenile colts, the Middle Park Stakes.

Established over 150 years ago in 1866, this race regularly attracts a number of the most promising youngsters in training, having been landed by talents such as Brigadier Gerard, Oasis Dream and Rodrigo De Triano over the years.

Open only to the two year old colts, this Group 1 event over 6f is one of the most prestigious juvenile contests of the season and offers a very handy £220,000 in total prize money. The ground at the track is currently described as good, but with rain on the way that may change come race day. Plenty of the wet stuff is forecast on both Friday and Saturday so that is certainly something to factor in to your bets.

With six wins in total, including three in the past nine years, it is Aidan O’Brien who sits atop the trainers’ table for this race. O’Brien isn’t particularly fancied by the betting market this year though, with his sole entry Lipizzaner being amongst the longer priced runners in the field.

Frankie Dettori boasts the best record amongst the riders on show with four previous wins to his name. Lying only two behind Lester Piggott, Sir Gordon Richards and Danny Maher in the all-time list, Dettori will have high hopes of moving a step close as he takes the ride on the well-fancied Martyn Meade runner, Method.

A strike rate of five winning favourites or joint favourites in the past 10 years is solid enough and, despite a couple of pretty short prices, has still edged supporters of the market leader into a level stakes profit of +£0.74 over this period. Whilst those towards the top of the market have done well, it should also be remembered that we have seen three horses win at 22/1 or longer in the last nine years, so an upset is not off the table by any means.

Thanks to the exploits of the brilliant Battaash, we have become pretty used to the sight of Jim Crowley carrying the Hamdan Al Maktoum colours to victory in sprint contests in recent years, and on the early evidence, the powerful owner may well have another star on his hands in the shape of the Mehmaas colt, Minzaal.

Looking a winner in waiting when obtaining no sort of run until way too late in a decent event at Ascot on debut, he wasted no time in backing up that impression when scoring in almost ridiculously easy style in a novice event at Salisbury next time out. It was Group 2 company for this good-looking bay on his subsequent start, and whilst not quite winning in a canter as he had a Salisbury, he could still be called the winner some way out that day.

Looming up ominously, with the majority of his rivals flat to the boards, he then quickened nicely to put daylight between himself and the rest before seeing the trip out well for a two-length success. He is up in class again here and does have a few pounds to find with a couple of these, but it is more than likely we haven’t seen the best of him yet and he may well be up to the task.

Sire Mehmaas is one of the real emerging stars of the breeding game, and this looks a particularly strong race for the Tally Ho stud stallion. In addition to Minzaal, the retired July Stakes winner will also be represented by Clive Cox’s Supremacy, and the unbeaten in two, Method, from the yard of Martyn Meade. Both runners come here with strong claims and possess a similar profile, but we just prefer the claims of Method.

A perfect two from two in his career to date, this one made subsequent Group 2 winner Fev Rover look pedestrian when routing the field on debut at Doncaster, and was just as impressive when landing a Listed event over this trip at Newbury last time out.

Travelling sweetly enough on the heels of the leaders throughout that day, it did then take him a few strides to pick up, but once he did it was all over as he cleared away for a 2¼l success. A strong pace at the trip – which he seems likely to get here – ought to suit a horse who is already being mentioned as a Guineas possible, whilst the fact that his trainer has fired in three winners from his past nine runners also augurs well for his chance. Further boosting his chances, Dettori takes the ride and he shouldn’t be too far away.

Flying the flag for Ireland this year are Joseph O’Brien’s Charterhouse, Aidan O’Brien’s Lipizzaner and Lucky Vega from the yard of Jessica Harrington. Of course, any horse with the name of O’Brien in the trainer column in a Group 1 event always merits the utmost respect, but of that trio, it is Lucky Vega who boasts by far the strongest form.

Sitting on a perch of 117, this son of Lope De Vega is not only the best of the Irish runners, but the best horse in the race full stop according to the official handicapper, and significantly has already proven himself up to winning in Group 1 company. That top level success came in the prestigious Phoenix Stakes at the Curragh two starts back, and he did it ever so easily too – looking really strong inside the final furlong to power right way from the likes of Steel Bull, The Lir Jet and Aloha Star.

Such obvious claims are tempered by the fact that he does arrive on the back of a defeat having finished fifth in the 7f National Stakes last time out. However, that effort can be upgraded significantly as he enjoyed no sort of run at all, being trapped in a pocket as the race unfolded in front of him. Even the bare form of that 2½l defeat puts him right on the premises here, and on that Phoenix Stakes performance, he may well be the one they all have to beat at a price that looks very fair.

About the Middle Park Stakes: Classy Colts On Show At Cambridgeshire Meeting

Being one of the most famous racecourses in the country – certainly when it comes to the flat racing side of the sport – it is no surprise that the Suffolk venue of Newmarket can be relied upon to provide a steady stream of top-class events over the course of the season. The Classic contests of the 1,000 Guineas and the 2,000 Guineas are of course the highest profile of the nine Group 1’s to be run at the track, but Newmarket is also one of the best courses around when it comes to juvenile action.

Close to the top of the pile amongst the two year old events is this Group 1, six furlong affair open only to the colts. Named in honour of a stud owned by renowned breeder William Blenkiron, and first run all the way back in 1866 as the Middle Park Plate, the race now takes place on the closing Saturday of September’s three-day Cambridgeshire Meeting.

Now pretty well established in its current form, things weren’t always quite as they are now, with the race not being restricted to colts until 1987, and briefly being moved from its Cambridgeshire meeting slot, between 2011 and 2014, to feature as part of Future Champion’s Day at the track. Whenever it has been run though, this has always been a high-class contest, which can provide early pointers towards the following season’s major contests, including the 2,000 Guineas. 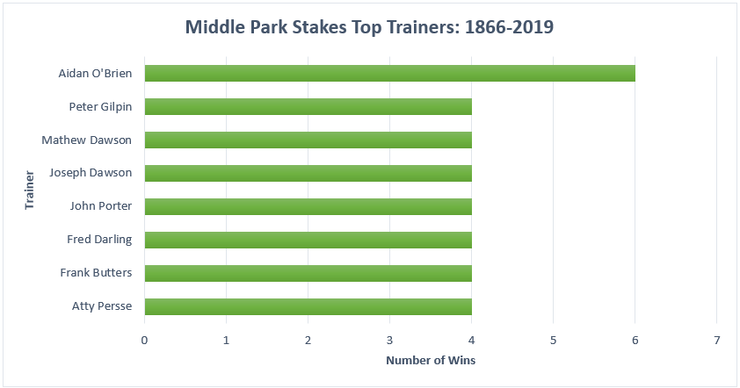 For a long time it appeared four was the magic number when it came to total wins for a single trainer in this race. Fred Darling became the seventh trainer to reach that total when landing the prize with The Cobbler in 1947, but it would take another 70 years before we had our first five-time winner of the race.

The man to achieve the feat was of course the greatest flat trainer of the modern era – Aidan O’Brien. First successful with Minardi in the year 2000, O’Brien moved out on his own at the top of the leader board when saddling U S Navy Flag to victory in 2017. Not content with that, the Ballydoyle maestro promptly made it six with Ten Sovereigns in 2018, and we suspect he isn’t anywhere near finished yet. 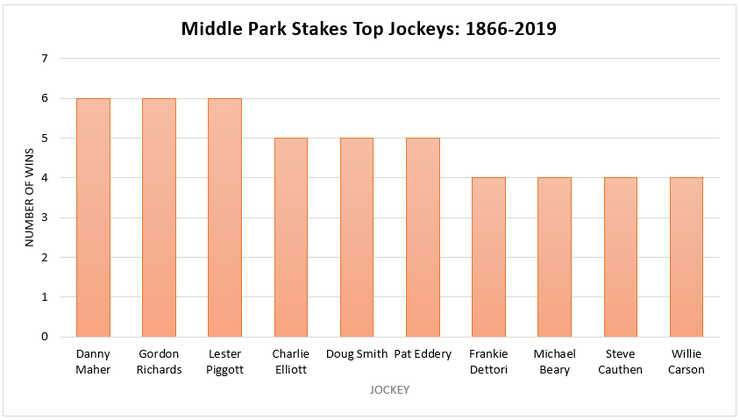 We have two of the most famous names in the history of the sport included in a three-way tie for the lead amongst the jockeys in this race. Britain’s all-time top-winning jockey, Sir Gordon Richards, and the legendary Lester Piggott need little introduction to racing fans, but the name of Danny Maher may not be quite so familiar.

The fact that Maher isn’t so well known, must mainly be down to the fact that the sixth of his wins came over 100 years ago in 1913, as his overall achievements in the saddle bear up to the closest scrutiny. In addition to being a British Champion Jockey, and winning all five of the Classics, Maher is also in the American Jockeys Hall Of Fame for his exploits in the US.

Being a high class two year old contest held on the Rowley Mile course, it is no surprise that many look to this race for early clues ahead of the following season’s 2,000 Guineas. A total of sixteen winners have gone on to land the first colts Classic of the season, but it must be noted that the quality of this race as a Guineas Trial has been diminishing over the years, with only two of those sixteen coming between 1971 and 2019.

The full list of those to achieve the Middle Park Stakes and 2,000 Guineas double reads as follows: