Saturday’s card at Newmarket’s Cambridgeshire Meeting may boast the historic Cambridgeshire Handicap as its headline act, but we do also have not one, but two excellent Group 1 contests on the card. The first is the fillies’ Cheveley Park Stakes and the second of which is this event for the juvenile colts, the Middle Park Stakes.

Established over 150 years ago in 1866, this race regularly attracts a number of the most promising youngsters in training, having been landed by talents such as Brigadier Gerard, Oasis Dream and Rodrigo De Triano over the years.

About the Middle Park Stakes: Classy Colts On Show At Cambridgeshire Meeting

Being one of the most famous racecourses in the country – certainly when it comes to the flat racing side of the sport – it is no surprise that the Suffolk venue of Newmarket can be relied upon to provide a steady stream of top-class events over the course of the season. The Classic contests of the 1,000 Guineas and the 2,000 Guineas are of course the highest profile of the nine Group 1’s to be run at the track, but Newmarket is also one of the best courses around when it comes to juvenile action.

Close to the top of the pile amongst the two year old events is this Group 1, six furlong affair open only to the colts. Named in honour of a stud owned by renowned breeder William Blenkiron, and first run all the way back in 1866 as the Middle Park Plate, the race now takes place on the closing Saturday of September’s three-day Cambridgeshire Meeting.

Now pretty well established in its current form, things weren’t always quite as they are now, with the race not being restricted to colts until 1987, and briefly being moved from its Cambridgeshire meeting slot, between 2011 and 2014, to feature as part of Future Champion’s Day at the track. Whenever it has been run though, this has always been a high-class contest, which can provide early pointers towards the following season’s major contests, including the 2,000 Guineas.

For a long time it appeared four was the magic number when it came to total wins for a single trainer in this race. Fred Darling became the seventh trainer to reach that total when landing the prize with The Cobbler in 1947, but it would take another 70 years before we had our first five-time winner of the race. 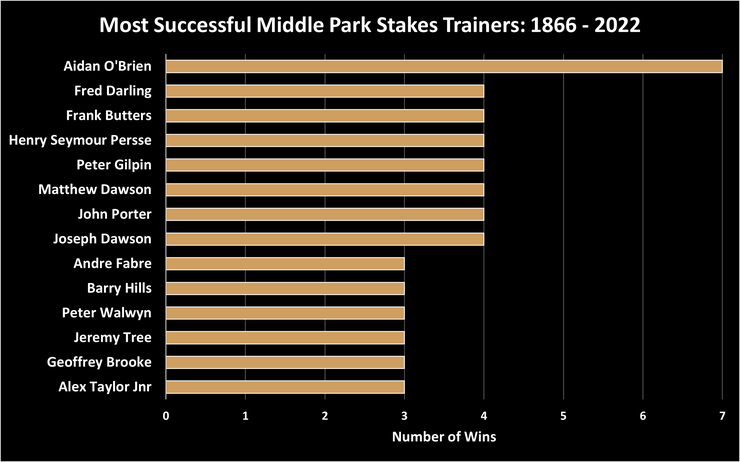 The man to achieve the feat was of course the greatest flat trainer of the modern era – Aidan O’Brien. First successful with Minardi in the year 2000, O’Brien moved out on his own at the top of the leader board when saddling U S Navy Flag to victory in 2017. Not content with that, the Ballydoyle maestro promptly made it six with Ten Sovereigns in 2018. O’Brien extended his lead with a seventh win with Blackbeard in 2022.

We have two of the most famous names in the history of the sport included in a three-way tie for the lead amongst the jockeys in this race. Britain’s all-time top-winning jockey, Sir Gordon Richards, and the legendary Lester Piggott need little introduction to racing fans, but the name of Danny Maher may not be quite so familiar. 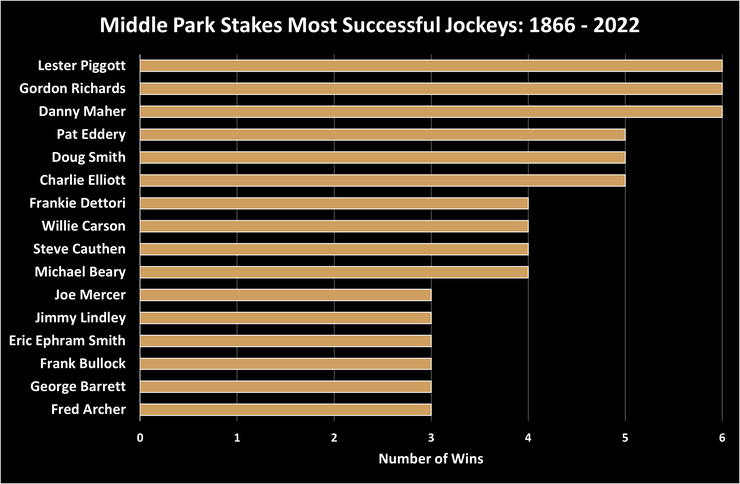 The fact that Maher isn’t so well known, must mainly be down to the fact that the sixth of his wins came over 100 years ago in 1913, as his overall achievements in the saddle bear up to the closest scrutiny. In addition to being a British Champion Jockey, and winning all five of the Classics, Maher is also in the American Jockeys Hall Of Fame for his exploits in the US.

Being a high class two year old contest held on the Rowley Mile course, it is no surprise that many look to this race for early clues ahead of the following season’s 2,000 Guineas. A total of sixteen winners have gone on to land the first colts Classic of the season, but it must be noted that the quality of this race as a Guineas Trial has been diminishing over the years, with only two of those sixteen coming between 1971 and 2022.

The full list of those to achieve the Middle Park Stakes and 2,000 Guineas double reads as follows: