Aintree has a novice chase on each day of the Grand National Festival, on Friday’s Ladies Day it is the Mildmay Novices Chase. At 3 miles and 1 furlong, this is for staying chasers and often attracts runners who have competed in the Brown Advisory Novices’ Chase at Cheltenham.

The first running of this contest was in 1981, and the race takes place on the tight Mildmay course, as opposed to the Grand national course. Many of the winners here have gone on to win some of the biggest races in the sport, including the Grand National, Cheltenham Gold Cup, King George VI Chase and the Stayers’ Hurdle.

The Mildmay Novices’ Chase is one of Aintree’s more recent additions. The prestigious contest was only first conceived in 1981, making it one of the younger races in this sport’s calendar. This particular contest is a National Hunt chase and includes 19 obstacles for the horses to negotiate.

As a novice race the field is only made up of horses who have not won a contest of this kind before the start of the season. Also, to be able to compete, horses must be five years of age and older. Though do not let that fool you, as the equestrian quality on show is simply world class and any horse that does well here should certainly be one to follow.

The race itself was only changed to a Grade 1 contest in 2014, however that doesn’t diminish the highly rated winners prior to that. In fact the first two winners ever in Bregawn and Burrough Hill, both went on to score at the Cheltenham Gold Cup. Not an easy task by anyone’s standards.

Another early winner, Rhyme ‘n’ Reason, successful in 1985, would go on to land the Grand National, so this race really is a great indicator of success in future tests of stamina. Future success for winning horses has been something we have seen throughout the entire history of the race, with 1990 victor Royal Athlete another to do the Mildmay/Grand National double. Some of the more recent winners of this novice contest which you may remember are Big Buck’s (who of course would have more success as a hurdler), Silviniaco Conti, Saphir Du Rheu and Native River.

The Mildmay Novices’ Chase has similar conditions to another race which is run in March at the Cheltenham Festival. The Brown Advisory Novices’ Chase (registered as the Broadway Novices’ Chase) is quite alike the Mildmay Chase, and as such there is often a similar field over the two races for horses capable of the quick turnaround required.

In 2017 Irish horse Might Bite was able to secure first place in both chases, a feat only ever achieved twice before and a real feather in the caps of both trainer Nicky Henderson and jockey Nico de Boinville. The other two were Star De Mohaison for Paul Nicholls and Barry Geraghty in 2006 and Monsieur Le Cure for John Edwards and Peter Niven in 1994.

Ahead of the Pack

Throughout the many years that this contest has been gracing the racing calendar there has been many a world class jockey riding the winner. However, there is only one man who has won the race four times. That jockey is Richard Dunwoody who had his four winning runs between 1987 and 1997. The champion jockey had Richard Johnson and Anthony McCoy nipping at his heels for many years however both have since hung up their whips and will not add more wins in the future. 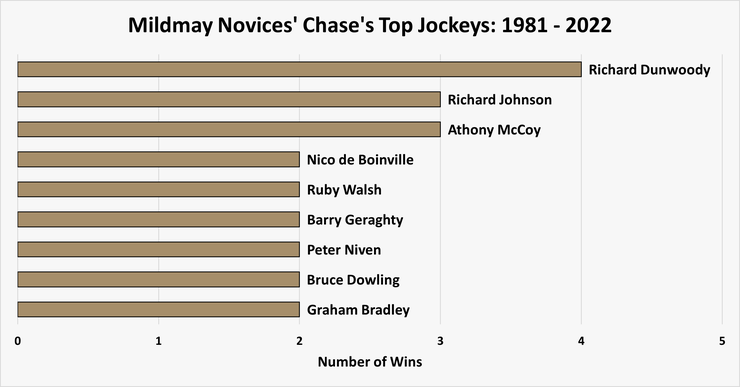 On the trainer side of the Mildway Novices’ Chase, that man Henderson is the only one who has secured six winning runners. A man of his esteem, hunger and ability to secure victory from the toughest of fields may well not be finished just yet either. In saying that though, there is one other trainer close behind him. Paul Nicholls was the leading trainer in this race after his 2015 win took him to four, but wins in 2017, 2018 and 2021 for Henderson has moved him above by a narrow margin. It is only left to see who can produce the next winner.

There are some interesting statistics regarding the ages of the winning horses for this race, as you can see from the chart below. 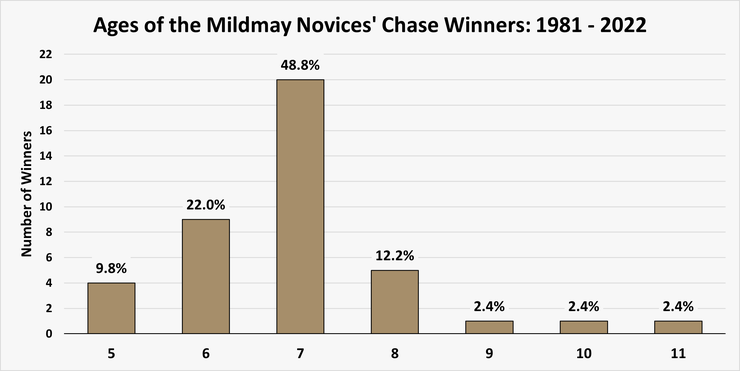 For the races run since 1981 there is a definite trend, showing that horses aged six or seven have won 70.8% of all the contests run. That’s not surprising given this is a novice’s affair but more specifically seven year olds alone have won 48.8% of all races run. So, if you are a gambling person, and we assume you are, you might be best focussing on lucky number seven.