Newbury’s Mill Reef Stakes is a six furlong sprint for juvenile colts and fillies, held at the Berkshire track each September.

Established in 1972, the race is named in honour of one of the all-time greats, Mill Reef, who was trained by Ian Balding at his Kingsclere Park House Stables just ten miles south of the course.

The Mill Reef has been won by the likes of Harry Angel and Ribchester in recent years and this race can often provide a steppingstone towards future Group 1 success.

A Group 2 contest offering £60,000 in total prize money, this event sees a field of juvenile performers do battle over the six furlong trip. The ground at the track is currently described as good and looks unlikely to change before the race runs.

Of the trainers on show, only Mick Channon and Richard Fahey have sent out the winner of this on more than one occasion. Fahey’s representative, Rhythm Master is amongst the fancied contenders this year, whilst Channon’s sole entry Cairn Gorm is the rank outsider of the field at the time of writing.

Silvestre De Sousa, Jim Crowley and James Doyle all have a win in this race on their CVs, but it is two-time champ Adam Kirby who boasts the best record amongst this year’s jockeys. Kirby takes the ride on First Edition, who won impressively last time out for Clive Cox.

This has been an excellent race for those towards the head of the market in recent years, with each of the past 10 winners having been priced at odds of 4/1 or shorter. This streak has included six winning favourites or joint favourites, handing jolly backers a level stakes profit of £5.88.

The horse charged with extending the excellent recent record of the favourites this year seems most likely to be the, ironically named, Fivethousandtoone, from the yard of Andrew Balding. This son of the mighty Frankel currently heads the betting in most lists having shown bags of potential in his two career starts to date.

Going in the colours of King Power Racing, this one had clearly been showing plenty at home, as he was sent off at odds of just 5/6 on debut in what looked a decent 12-runner maiden at Windsor. He could manage only a three quarter length second place to the re-opposing Bahrain Pride that day, but with that runner having since gone on to score in Listed company at Ripon, the form looks solid.

There are also strong reasons to believe that Fivethousandtoone has improved significantly since that debut effort, as he posted a very impressive display on his next start up at Newcastle. Pushed straight into the lead that day, he never saw another rival before winning by four lengths at something of a canter. The big question is of course whether or not he can translate that improvement from an all-weather surface back onto the turf, but he looks a big threat to all if able to do so.

Given his pedigree and connections, Fivesthousandtoone undoubtedly possesses plenty of promise, but for us the best form in the race belongs to the Richard Fahey-trained runner Rhythm Master.

Sired by one of the strongest speed influences around in Dark Angel, this one showed plenty of dash on debut at Haydock. Having to switch around just about the entire field that day, the response once into the clear was electric as he scorched right away from subsequent winners, Rolfe Rembrandt and Cairn Island.

That was an excellent start to his career, but his effort next time out when sent in pursuit of a Group 1 prize over in France was even better. He may only have finished third that day, but considering the two to finish in front of him were Queen Mary winner Campanelle, and Coventry Stakes champ Nando Parrado, the form looks very solid – and all the more so considering Rhythm Master lost a chunk of ground when fly-jumping leaving the stalls. Dropping back slightly in class, it would be a surprise were he too far away under P J McDonald.

As mentioned, this race does tend to be dominated by those towards the head of the market, but, if there is a runner to upset the applecart at a big price, it may well be the Marcos Tregoning representative, Alkumait.

A son of Showcasing, this one really caught our eye on debut at Newbury back in July. Running very green and a little in snatches that day, he did belatedly get the hang of things to hit the line strongly on the heels of the leaders. That effort suggested he wouldn’t be long in making his way into the winner’s enclosure, and he duly delivered on that promise with an impressive win in a maiden last time out at Goodwood.

Travelling ominously well on the outside that day, he looked to have learned plenty from his debut run when quickening up stylishly to put the race to bed in a matter of strides. Impressive as that was, there still looked to be a bit left in the locker that day, and with three of those to finish in behind having since gone on to win, the form looks solid. He is right up in class here, but looks to have plenty of improvement left in him and may well make his presence felt under Jim Crowley.

About the Mill Reef Stakes: Young Stars Shine At Newbury

Most of the flat season’s major contests are in the record books by the time we reach September each year, as the thoughts of many turn to unearthing potential stars ahead of the following campaign. There are a number of high-class juvenile contests to assist in this regard, including this Group 2, six furlong event held at the Berkshire venue of Newbury.

Open to both male and female runners, the fillies in the field receive a three pound allowance from their male contemporaries, whilst there are also three pound penalties in place for those to have previously won at Group 1 or Group 2 level.

First run in 1972, when taking the place of a race known as the Crookham Stakes, the new title of the event honours one of the greatest flat racehorses of all time. A winner of 12 of his fourteen career starts, Mill Reef’s famous successes included triumphs in the Derby, the Eclipse, the King George VI and Queen Elizabeth Stakes and the Prix de l’Arc de Triomphe. With a CV like that he’s well worthy of having a race named in his honour.

A Classy Roll Of Honour

The race certainly got off to a flying start in terms of the quality of winner, with inaugural champion Mon Fils going on to land the following season’s 2,000 Guineas. Any thoughts that the race would then prove to be a reliable pointer towards future Classic success have however proved to be unfounded, with not a single winner since Mon Fils going on to land any of Britain’s five Classic contests. Forest Flowers’ win in the 1987 Irish 1,000 Guineas being the only other Classic success of any description.

The Classic’s aren’t the only quality contests on offer for the three year olds though, and a number of previous winners of this have gone on to prove themselves beyond their juvenile campaign.

Magic Of Life (1987) claimed the Coronation Stakes, whilst Zafeen (2002) and Excellent Art (2006) both stormed to St James’s Palace Stakes success. The classiest winner in recent times may well be Ribchester (2015) who landed the Jersey Stakes, the Lockinge Stakes, the Queen Anne Stakes and the Prix du Moulin during a highly productive three year old campaign. Undoubtedly the quickest of them all was the 2016 champ Harry Angel, who powered to July Cup and Haydock Sprint Cup glory as a three year old.

Nine different riders in all have landed this contest on more than one occasion, including a handful of the most famous jockeys to ever grace the track, as detailed in the table below. 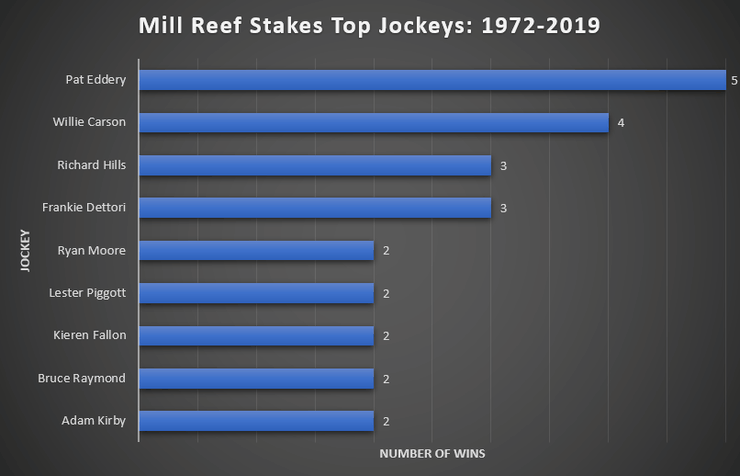 Top of the pile though is the five-time winner of the race Pat Eddery. One of the true greats of the modern era, Eddery won the title of British Champion Jockey on a record-setting 11 occasions during his career.

Champions Tied For The Lead 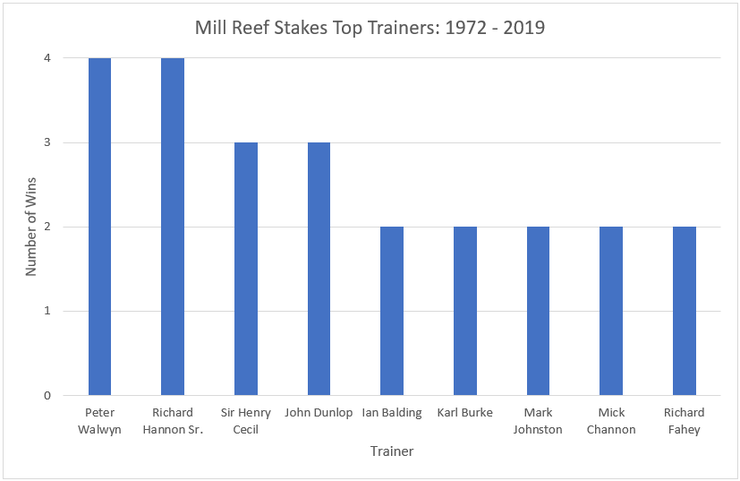 We have a pair of Classic winning former champion trainers leading the way in the standings here, in the shape of Peter Walwyn and Richard Hannon Snr who share top spot with four wins apiece. The likes of Ian Balding, John Dunlop and Sir Henry Cecil won’t be adding to their haul now, but Karl Burke, Mick Channon, Richard Fahey and Mark Johnston are all likely to have a few seasons left in them, and may yet threaten the lead. Mark Johnston in particular is a trainer renowned for success with his two year old runners.