Day three of Glorious Goodwood features three back to back Group quality races, the last of which is the Nassau Stakes. The middle distance event is part of the British Champions Series and has a hefty purse to reflect its high status.

When the race began in 1840, it was only open to three-year-old fillies but since 1975 fillies and mares of all ages have been able to compete.

The Nassau Stakes is synonymous with the late, great trainer Sir Henry Cecil who won this eight times. Three of those victories were with Midday, whose hat-trick came between 2010 and 2012.

We have a trip of 1m2f for the Group 1 highlight on Day 3 at Glorious Goodwood, with the race offering total prize money of £250,000 this year. The going at the track is currently described as good.

One of the top mile and a quarter events of the season for the fillies, this race sees a clash of the generations, as the classic generation tackle their elders. In receipt of a handy nine pounds weight for age allowance, it is the three year olds who have come out on top of late, with six wins in the past eight years.

Sir Michael Stoute boasts the best record of the trainers represented this year, and needs just one more winner to draw level with Sir Henry Cecil’s all-time record of eight successes in the race. Flying the flag for the Newmarket handler this time around is the four year old, Queen Power.

Returning champion Deidre caused a 20/1 shock when coming home in front in this race twelve months ago, but overall this has been a fairly solid race for those towards the head of the market. The past 10 years have seen five winning favourites, handing supporters of the jolly a level stakes profit of £1.49.

This contest has fallen to a classic winning filly in three of the past five seasons, with 1,000 Guineas heroines, Legatissimo, Minding and Winter all following up here. We don’t have a Guineas winner in this year’s line up, but we do have the winner of the French Oaks set to go to post, in the shape of the Donnacha O’Brien-trained, Fancy Blue. Ryan Moore takes the ride aboard this daughter of Deep Impact, despite having the option of getting the leg up on Aidan O’Brien’s Group 1 winning mare, Magic Wand, and on what will be just her fifth career start, there must be a fair chance that we haven’t seen the best of her yet.

A perfect two from two for Aidan O’Brien last season, with Donnacha the man in the saddle for her debut success, the youngest of the O’Brien’s then officially took over as her trainer in January of this year. Donnacha clearly held the Michael Tabor runner in pretty high regard as he sent her in pursuit of the Irish 2,000 Guineas prize on her first start of the campaign, and was duly rewarded with a fine effort, as Fancy Blue finished with great effect to reel in all bar the Aidan O’Brien trained winner, Peaceful.

That effort suggested a step up in trip may well be in order, and as such it was no surprise to see her entered for the Prix de Diane (French Oaks) at Longchamp last time out. What followed was the highlight of her fledgling handler’s career as Fancy Blue prevailed in a real ding-dong battle with Alpine Star in the straight, with her Guineas conqueror, Peaceful, amongst those in behind. She looks well worth her place in this line up on the back of that effort and, once the weight for age allowance is factored in, she is the one they all have to beat on the ratings.

The older performers certainly won’t go down without a fight though, with Magic Wand and Deirdre in particular looking dangerous to dismiss. Queen Power may also be worth a second look at an each way price given the record of her trainer in the race. However, if one of the older runners is to prevail, it would seem most likely to be the John Gosden-trained Nazeef.

Unraced as a juvenile, this Hamdan Al Maktoum-owned filly still looked in need of the experience when finishing third on debut at Newmarket in June 2019. However, it hasn’t taken her long to grasp what is required, as she has won all six starts since that first outing. A perfect three from three in the current campaign, she has scored narrowly at Listed, Group 2 and Group 1 level, and whilst those wins certainly weren’t flashy, what they did demonstrate was her sheer will to win – a priceless quality to have at any level. The main question she has to answer here regards the trip as she ventures beyond a mile for the first time. The manner in which she has finished off her races does suggest that she will cope with the additional distance though, and she likely won’t go down without a fight. Jockey Jim Crowley has already enjoyed some season, with a string of high-profile successes under his belt, and he will have high hopes of landing another aboard this likeable daughter of Invincible Spirit.

About the Nassau Stakes 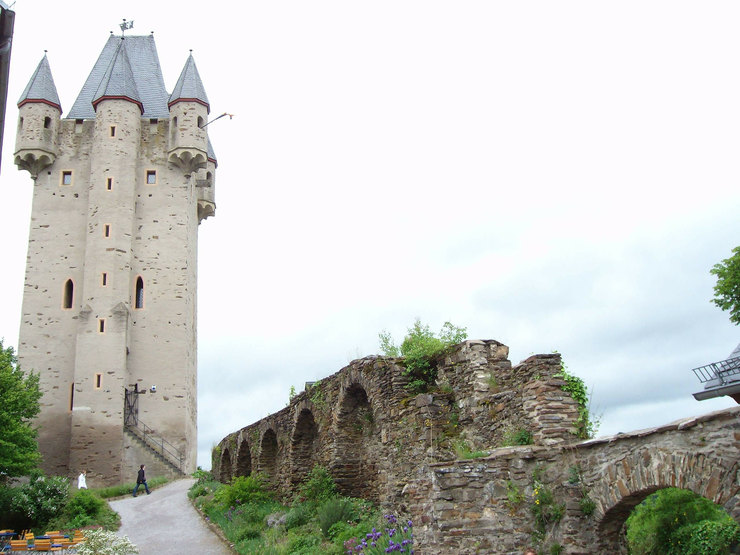 Ladies’ Day at the Goodwood Festival brings much glitz and glamour to the course but of course it’s not just a big day for the girls watching on from the stands. The third day of the Festival is also a big one for the female horses as it sees the running of the Nassau Stakes, a test restricted to fillies and mares aged three and above. Boasting a hefty purse and Group 1 status, it’s one of the leading all-female races of the season and stands as part of the British Champions Series.

As some of you may know, Nassau is the capital of the Bahamas but that’s not the inspiration for the name of this race. It instead acknowledges the friendship between former Goodwood Racecourse owner, the 5th Duke of Richmond, and the House of Orange-Nassau. Back when first established in 1840, the event was contested over one mile but in 1911 it increased to its present length of just under of one mile and two furlongs. Another change followed in 1975 as for the first time three-year-olds were eligible to compete in the then Group 2 contest.

Since being made eligible to compete in this race, three-year-olds have well and truly seized the opportunity. Regularly bettering their older competitors, younger entrants have enjoyed a sustained period of success in this race stemming right back to their first appearance in 1975. While there have been older victors dotted around, the chart below shows just how dominant minimum age performers have been. A large part of the reason why is that three-year-olds carry eight pounds less than horses aged four and above. 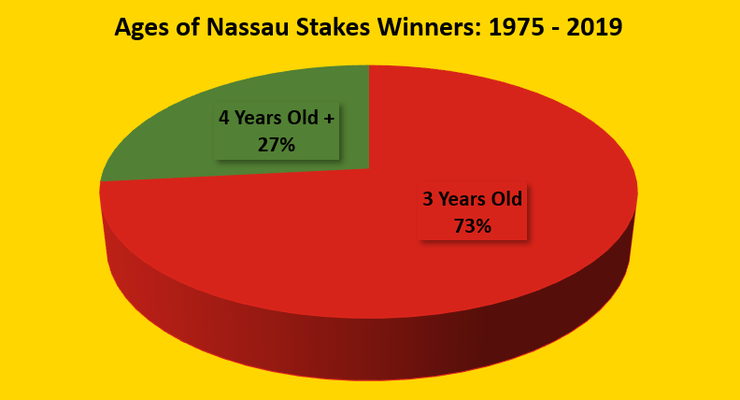 MIDDAY STRIKES NOT ONCE BUT THRICE

It’s a rare sight to see any horse win this Group 1 event back to back. Ruby Tiger managed it in 1991 and then in 1992 and before that Roussalka was the last to pull off the double 16 years earlier.

Bearing this in mind, it is quite the remarkable feat that Sir Henry Cecil’s Midday managed to secure three consecutive victories in what remains a record breaking hat-trick. Having already won the 2009 and 2010 renewals, the Khalid Abdullah-owned horse returned as a five-year-old despite the lack of success older horses have had in this race. She showed no sign of ageing though as she won by two lengths, clocking a time only half a second slower than recorded 12 months earlier.

DISTANCE FORM NOT A NECESSITY

A former win or two over 1m 2f is certainly not going to harm a horse’s chances in this race but it’s far from a key requirement of Nassau Stakes hopefuls. For many former champions, winning this race was their first taste of success over the distance with several making their middle distance debut. Of course, there have been plenty of fillies and mares unable to cope with the demands of a longer trip but a former distance win nevertheless remains a fairly unimportant feature. 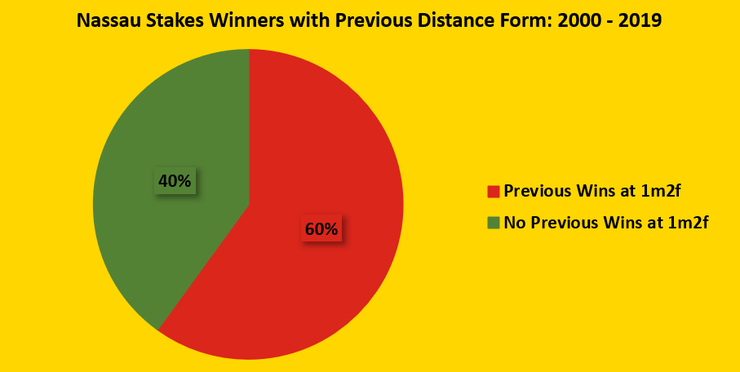 As there are often only single-digit fields competing in this middle distance race, sometimes it’s easy to spot who the winner will be down the final furlong. This was absolutely not the case during the 2008 renewal however, arguably the most memorable of recent times.

Aidan O’Brien’s Halfway To Heaven enjoyed a slender lead heading into the last 200 yards but the evens favourite Lush Lashes as well as Passage of Time and Heaven Sent were all well within touch. Lush Lashes mounted a real challenge but fell short by a head’s length alongside Passage of Time with Heaven Sent finishing just a neck further back.