Newbury’s Super Saturday, which takes place in February, has a number of quality races but the most interesting for many will be the Betfair Hurdle, a valuable handicap run over 2 miles ½ furlong. The first running of this race actually took place at Aintree in 1963, won by Rosyth who followed up the following year with a repeat victory. The previous winners of this race include two who have gone on to win the Champion Hurdle at Cheltenham, Persian War and Make A Stand.

The next race is scheduled to run on 13th February 2021. The race info, trends and tips shown below will be updated for the next renewal once the final declarations have been made.

2m½f is the trip for this competitive Grade 3 handicap hurdle contest which offers £155,000 in guaranteed prize money. The ground at the track is sizing up to be good to soft with drying conditions forecast in the lead up to the race so it should deteriorate and if anything could get firmer.

With five wins in total, Nicky Henderson is the most successful trainer in the history of this event, making his duo of Never Adapt and Mill Green well worth a second look this time around. Fans of trainer trends will likely also want to consider the Nigel Twiston-Davies trained pair of Sir Valentine and Stolen Silver, with the Naunton handler having claimed top spot three times in the past six years.

It isn’t impossible for the older hurdlers to come home in front in this, with Geos getting the job done for Henderson at nine years of age in 2004. That was something of an exception though, with every edition since having been won by a runner aged either five or six years of age.

Considering just how open and competitive this race generally is, the favourites actually have an excellent recent record. Five wins in the past 10 years for the favourite or joint favourite has resulted in a level stakes profit of 14.25pts for supporters of the market leader.

Currently heading the betting for this year’s contest is the hat-trick seeking Mack The Man from the yard of Evan Williams. Zero from five headed into the current season, he seems to have found considerable improvement over the summer months.

A comfortable two-length winner on his return at Warwick, he then absolutely tanked into contention before pulling almost two lengths clear of the useful Protektorat to land a heavy ground Listed event at Sandown last time out. He’s been hit with an eight pound rise on the back of that but, such has been his rate of progression so far this season, he can’t be ruled out.

Another runner heading into this looking to register a third win on the spin is Hughie Morrison’s, Not So Sleepy. As an eight year old, this one does have the recent age trend to defy, but if we were to judge the field purely on their most recent run, he may well be the one they all have to beat.

Kept busy on the flat over the summer, this son of Beat Hollow returned to hurdles at Ascot in November to post a solid win in a Class 2 contest. Stepped up into Grade 3 company at that same track last time out, he responded with a mightily impressive nine-length demolition job. The going was heavy that day, but he has won on good ground in the past and is one for the shortlist – despite being fully 17 pounds higher in the handicap than for that latest success.

If Nicky Henderson is to add to his record-setting haul in this race, then the horse most likely to do it – at least according to the betting market – is the five year old mare, Never Adapt. Arriving in Britain from France in October 2018, this JP McManus-owned runner came with a pretty tall reputation, being highly regarded enough to be plunged straight into a Grade 2 for her first start in this country. Running way too freely she could however manage only third that day, before then missing the entirety of the following campaign through injury.

Returning to the track in December 2019 and being dropped into handicap company, she again failed to settle in once again filling third spot. Her effort last time out at Kempton was however much more like it. Coaxed along in behind the leaders by Barry Geraghty, she shot clear once asked to score by three and a quarter lengths. If that is a sign that the penny has finally dropped, then a 10 pound hike may not be enough to stop her. We fancy that her ability to quicken at the business end may stand her in good stead here, and she looks the one to be on.

Given the vast squadron of talented hurdlers he has at his disposal, Irish supremo Willie Mullins would appear to have had a few options when it comes to this race, and did in fact hold seven entries at one stage. As such it looks interesting that he has already whittled this list down to just one, prior to the final declarations being made.

That horse is the five year old, Ciel De Niege, who also goes in the famous green and gold of J P McManus. Looking a horse packed with potential when filling third spot behind Band Of Outlaws and Coko Beach in last seasons Triumph Hurdle, he hasn’t yet managed to get his nose in front, but did come very close when going down by just a head at Limerick last time out. A combination of being over-confidently ridden, and the winner getting first run led to his defeat that day, but he was closing all the way to the line, and a strongly run at this trip ought to prove ideal. At a double figure price he looks one of the better each way options in the field.

*2019 race was run at Ascot due to Newbury abandonment as a result of an equine flu outbreak. 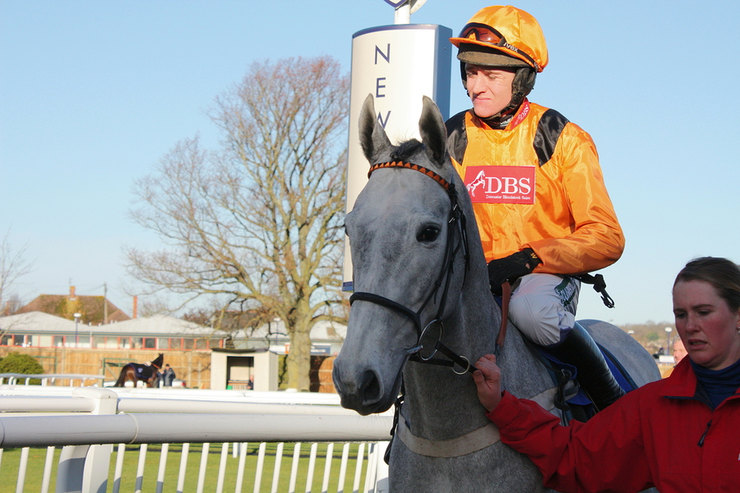 The Grade 3 Betfair Hurdle is one of the most exciting handicaps in the lead up to the Cheltenham Festival. Horses who run well in this tend to go on to have a run at the Festival but with a healthy prize fund, and bags of history and kudos at play, this is a race that very much stands on its own merits.

Although the Betfair Hurdle is indelibly linked with Newbury, the first edition back in 1963 actually took place at Aintree. The first winner of the race, Rosyth, became embroiled in some real controversy after he successfully defended his title in 1964 when the race moved to Newbury. The racing authorities were suspicious that a horse could win twice and yet be unplaced four times in between. Jockey, Josh Gifford, was suspended and trainer, Ryan Price, warned off.

The pair would, however, combine for two more wins in 1966 and 1967, the latter race won by Hill House who failed a drugs test but was subsequently shown to be able to produce cortisol naturally. It wasn’t until 2013, one year after the race became known as the Betfair Hurdle, that Nicky Henderson became the first trainer to surpass Ryan Price’s four wins as My Tent Or Yours won with Tony McCoy on board. 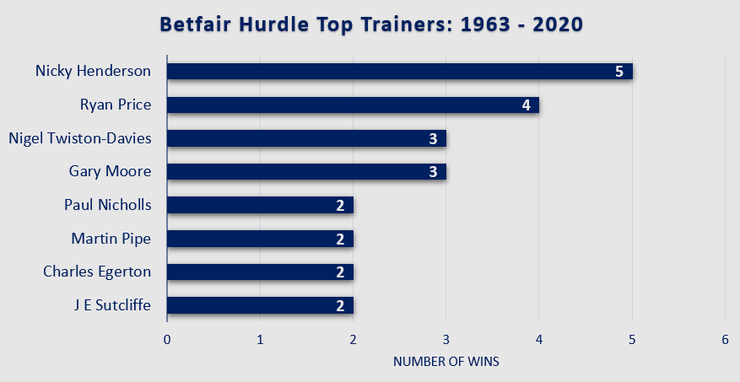 Initially, the race was known as the Schweppes Gold Trophy due to that company’s backing. Schweppes maintained sponsorship as the race grew in stature before Tote took over in 1986. That prompted a change of name to the Tote Gold Trophy (latterly the totesport Trophy) until 2011. From 2012 to 2020 (and counting) the race has taken on the present name.

The talk after My Tent Or Yours’ win in 2013 was all about him going on to race in the Champion Hurdle, one of the four feature races at Cheltenham. However, caution prevailed and he stayed in novice company before tackling the Champion the following year. My Tent Or Yours ran into one too good on three separate occasions in the big hurdle at Cheltenham so was unable to join Persian War and Make A Stand as winners of both races.

The Supreme Novices’ Hurdle is actually the most common path for winners of the Betfair Hurdle to take. That’s because this is a contest in which a number of novice hurdlers are tested out against open company. Whatever choice connections make, it is rare for a horse to go from the Betfair Hurdle to victory at Cheltenham, although most winners at Newbury do at least try to claim glory at the Cotswolds extravaganza.

Winners of the Betfair Hurdle may not win many races at the Cheltenham Festival, at least not following on from their initial success, but as the above table shows, many end up in the places. That is quite impressive for a handicap race which has a knack of providing long odds winners.

It’s very much a mixed bag in terms of odds of Betfair Hurdle winners. Between 2010 and 2020 five horses won who were either the favourite or joint favourite. The other six winners went in at 6/1, 12/1, 16/1, 20/1 and 33/1 twice. It’s little surprise that the winning favourites have had a better Cheltenham record than the longer priced horses. 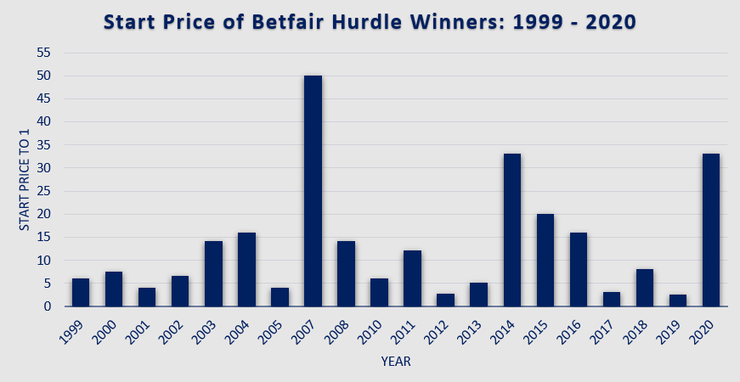 Connections aren’t just enthused by this as a warm up race though. There is also a handsome £100,000 bonus for horses who win both the Betfair Exchange Trophy and the Betfair Hurdle. That’s on top of a prize fund which reached £155,000 in 2020, making this very lucrative for a Grade 3 contest.