One of Royal Ascot’s many attractions is the opportunity to see some of the speediest performers in the game in full flight. In terms of the sprint events for the two year olds they don’t come much quicker than this thrilling contest held over the minimum trip.

The Norfolk Stakes began life as the New Stakes back in 1843, renamed after the 16th Duke of Norfolk in 1973. The race is now one of the key juvenile sprints of the turf flat season.

Five furlongs is the trip for this Group 2 flat contest, set to be run on good ground this year and offering £50,000 in total prize money.

With little in the way of previous performances to base our opinions on, this is not the easiest of Royal Ascot events to call. The odds generally serve as useful guide though, as we have seen seven wining second or third favourites across the last nine renewals.

Being the outright favourite has often been of little benefit in this race despite the lack of real shocks. The last time the bookies’ pick managed to secure Norfolk Stakes glory was back in 2008. Will Eye of Heaven join the list of unlucky favourites or can he and Frankie Dettori combine to break the curse?

The latter would be no great shock as the bay colt looked a very useful unit on his debut earlier this month. Sizeable for his age, the two-year-old finished with a commanding gallop down Newmarket’s straight course. And of course, if anyone can deliver the goods here at Ascot it is Dettori.

Admittedly, there is not a great deal to choose between him and Lipizzaner. Our preference for the latter however is partly down to pedigree. Eye Of Heaven’s sire, Exceed And Excel, has produced some quality horses but Uncle Mo (sire of Lipizzaner) is a cut above in this regard. Another element to bear in mind is the draw. There isn’t an overwhelmingly strong bias at Ascot but high drawn horses typically fare better than those drawn low.

Potentially taking up second place in the betting this year is Lipizzaner, Aidan O’Brien’s sole entry. Curiously enough, the bookies have had a habit of underestimating the abilities of the Irishman’s juveniles on British soil. Across the last five years, O’Brien’s two-year-olds post a level stakes profit of 17.70 (as of Tuesday).

Could there prove to be value in Lipizzaner this Friday? We certainly think so. Although he’s yet to break his maiden, he’s twice come close. His debut saw him finish half a length off the pace at Naas and there was a repeat outcome when returning to Wales for a longer, six furlong test. The increase in distance did not work in the colt’s favour then as he surrendered his lead in the closing stages. A return to five furlong looks very likely to suit so we are expecting big things from him here and 5/1 looks a price worth taking.

Famed American trainer Wesley Ward does not often venture this side of the Atlantic but when he does, he tends to take only his best horses. You cannot deny he raises some talented thoroughbreds but many fail to adapt to the different test provided by British venues. Coming into this year’s Royal Ascot, his strike rate with two-year-olds on British turf was just 10%. That said, Ward has won this race twice (2013 & 2018) so you should not be too quick to dismiss his chances.

Putting this background to one side, how talented of a horse is Golden Pal? His debut showing at Gulfstream Park, in which he was the odds-on favourite, ended with him settling for second place. While fairly beaten, he did look comfortably better than the rest of the trailing pack during what was a perfectly solid run. There is clearly the makings of a decent horse here but 9/2 is a short price given he failed to wow on his debut.

Prince of Lir won this very race in 2016 so it will be interesting to see how his offspring, The Lir Jet, performs. There has been plenty of interest in the market following on from an impressive debut at Yarmouth. Proving too powerful for the field that day, Michael Bell’s horse led from start to finish, clocking a good time in the process. A winning run immediately ahead of this race has always been a positive sign too; a featured shared by nine of the last 12 Norfolk Stakes champions.

The only thing to be wary of is that his stable is well out of form. As of Tuesday, Michael Bell has had 49 runners this flat season and the The Lir Jet is his only winner. While this is not a huge sample size, it is a something of a concern especially given all the recent disruption. There are plenty of really good names in this race and it will be difficult for a horse not in top shape to get himself first to the line.

With some bookies paying four places in this race, an each way punt certainly has its appeal. There is value to be had a little further down the market too, particularly with Archie Watson’s Jojo Rabbit. A little too enthusiastic on his debut, the colt ended up losing around four lengths to the eventual winner in the final furlong.

Hollie Doyle stuck with a prominent approach four days later at Wolverhampton but this time, she prevented the two-year-old from running out of steam. The results were impressive with the 5/4 favourite securing an impressive four-and-a-half length win. Although this victory came on artificial ground, he will be a credible danger should he act so well on Ascot’s hallowed turf.

Trading at the same price as Jojo Rabbit is Imperial Force. Looking at his debut showing, we are a little surprised to see him feature at the minimum distance. Andrew Blading’s horse made his debut over six furlongs but had no extra gear late on despite the race being a little on the slow side. The steady rise on Ascot’s straight course does take a little focus off speed but we would need softer conditions to be tempted by the 10/1 outsider, even as an each way play.

About the Norfolk Stakes

Like many races during Royal Ascot, the Norfolk Stakes is one with a lengthy history. It first began way back in 1843 and was then known as the New Stakes.

Perhaps no longer seen as a fitting title for a 130 year old race, the event was renamed the Norfolk Stakes in 1973. It did so to honour the 16th Duke of Norfolk, who, between 1945 and 1972, served as HM’s Representative at Ascot.

Today the five furlong race is purely as a contest for two-year-old horses. Fillies, although not a large feature of the race, are free to take part.

The few that do go to post benefit from a 3lb allowance, something that Shang Shang Shang used to good effect in 2018 as she won by a nose. Female winners are a rarity in this Group 2 event though with the boys long the dominant force.

CURSE OF THE FAVOURITE

In a race that regularly features double digit fields, you don’t expect the favourites to win every time but you do expect them to at least win now and again. The Norfolk Stakes has been a particularly fruitless hunting ground for the shortest-priced horses though, with no favourite victorious since 2008. It’s hard to say very many since then have come too close either as the below chart shows. 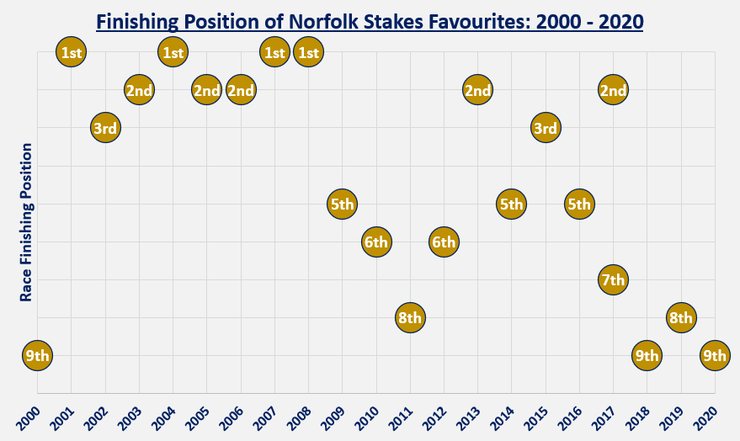 The Breeders’ Cup grew a little larger in 2018 thanks to the creation of the Breeders’ Cup Juvenile Turf Sprint. In order to gain automatic entry to the five and a half furlong race, valued at $1m, a horse must win one of the four qualifying races. The first of the ‘win and you’re in’ races to take place is the Norfolk Stakes, something that has helped increase the stock of this sprint event.

The move will also help sustain the American interest in the Group 2 event. Horses born across the Atlantic have won five renewals since 2008 alone and we could well see several more over the coming years. 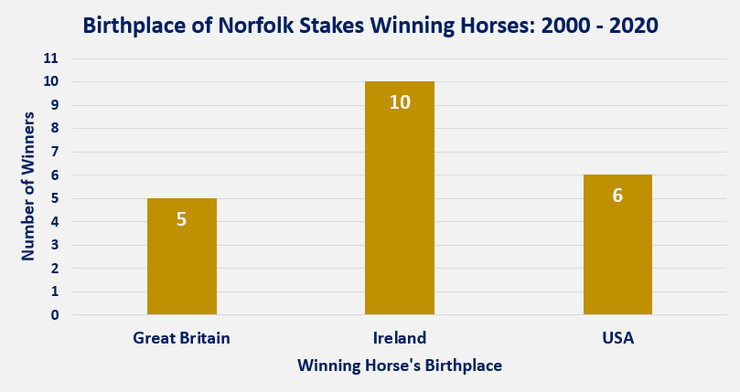 PIGGOTT’S RECORD UNDER NO THREAT

No active jockey is remotely close to matching the number of victories Lester Piggott managed in this race. One of the all-time greats of racing won so many different races throughout his illustrious career but few as often as the Norfolk Stakes.

Between 1961 and 1992, the Berkshire-born jockey rode his horse to glory on nine occasions, often against the odds. His final hurrah in this race came on 1,000 Guineas runner-up Niche and footage of the close fought contest can be seen below.