Taking centre stage at Cheltenham on the Saturday of their November meeting is this ultra-competitive handicap contest, the Paddy Power Gold Cup.

First run in 1960, this race has many sponsors over the years. Paddy Power have returned in 2020 having previously supported the Gold Cup between 2003 and 2015. Other backers include Mackeson, Murphy’s and most recently BetVictor.

The top trainers in the game tend to be attracted to Cheltenham for this big early season pot, and it has proven difficult for the smaller operations to break through over the years. This time around will we see the prize again falling to one of the big yards?

This Grade 3 chase contest over 2m4f is the big handicapping highlight of the Cheltenham November meeting and this year it offers an excellent £130,000 in total prize money. The ground at the track is currently described as good to soft but the forecast rain could soften things up further before the runners get going.

Legendary handler Martin Pipe tops the trainers’ table in this race with a total of eight wins. Martin is of course now retired, but son David carried on the family tradition when saddling Great Endeavor to victory in 2011 and sends Siruh Du Lac into battle this time around. Of the trainers who are represented this year, it is Nigel Twiston-Davies who boasts the best record with four previous wins. The Naunton-based trainer saddles the talented Al Dancer this year.

One of the more eye-catching trends here is the fact that eight of the past 10 winners have been saddled with 11st or less on the day, suggesting the top nine runners in the weights in this year’s field may be up against it.

Considering this is a big field handicap affair, there haven’t been too many huge shock results of late, with eight of the past 10 winners returning an SP of 14/1 or shorter. There have however been no winning favourites in the past decade, handing supporters of the market leader the maximum £1 level stakes loss of £10.00 over this period.

Paul Nicholls has saddled the winner of this twice in the past with Caid Du Berlais and the talented Al Ferof, and sends two to post this year in the shape of Brelan D’As and Saint Sonnet. Brelan D’as has solid form in the race having finished second 12 months ago, but it is Saint Sonnet who the market has latched onto ahead of this year’s renewal.

A winner of four of eight starts when based in France, this one only joined Nicholls in January of this year. Sent to Catterick for his British chase debut, he duly won as a 1/5 shot should, before being stepped right up in class for the Grade 1 Marsh Novices’ Chase at the Cheltenham Festival. Whilst ultimately well beaten into seventh of 12 that day, it was only really on the turn for home that he began to wilt having travelled right up with a quality field for much of the way, whilst a stumble at the final flight didn’t help his cause. That’s a solid enough run in the context of this Grade 3 handicap affair, particularly as having now had a full summer at the Nicholls yard, it would be reasonable to expect improvement.

One of the first ones to jump out at a double figure price is the Colin Tizzard runner, Slate House. Tizzard also runs The Russian Doyen, who wouldn’t be entirely dismissed either, but it is this Robbie Power ridden son of Presenting who very much looks to be the yard’s main contender.

A three-time winner on the Old Course here at Cheltenham – which will be used here – this one gets a big tick in the course box which counts for plenty at one of the toughest tracks in the country. He also undoubtedly has the class for this having scored in Grade 1 company when landing the Kauto Star Novices’ Chase at Kempton last December. It is however his run in defeat in this race 12 months ago which makes him of strong interest here.

Travelling well throughout that day, he loomed up around the outside seemingly cantering as they turned for home, and was just hitting the front when knuckling on landing and coming down at the second last. He did admittedly still have a fence and the hill to tackle, but travelling as well as he was, and already having won over 3m, it’s hard to imagine he wouldn’t have gone very close indeed. On the downside, he isn’t the most consistent of performers, and is five pounds higher this time around, but that’s still five pounds lower than his career high rating and we can see him running a big race.

As mentioned, those runners from towards the lower end of the weights have fared pretty well in this event in recent years. However, looking for an obvious one to fit that trend this year isn’t easy. Coole Cody’s trainer Evan Williams mentioned this a potential target pre-season, so he could be worth a second look but may be inconvenienced should the rains arrive. From those saddled with 11st or less – and at a really big price – our each way vote would go to the Sean Curran-trained Domaine De L’Isle.

Yet another ex-French runner, this one has plenty of experience and will be making his 13th start over fences in this. However, only five of those have come in this country and, still only seven years old, he may well have scope to improve from his current mark of 146. Unsurprisingly considering his price, his form is a little patchy, but on the pick of those efforts he would have a fair shout at making the frame. The performance from last season that stands out is his effort in landing a 2m5f event on heavy ground at Ascot, when seeing off the likes of Kildisart, Benny’s King, and last year’s winner of this, Happy Diva.

Sharpened up by a fourth placed effort at this track on his seasonal return, and with his trainer having hit the target with two of his past six runners at the time of writing, he looks to represent a bit of value, particularly as a number of firms are paying out each way on the first six home.

About the Paddy Power Gold Cup 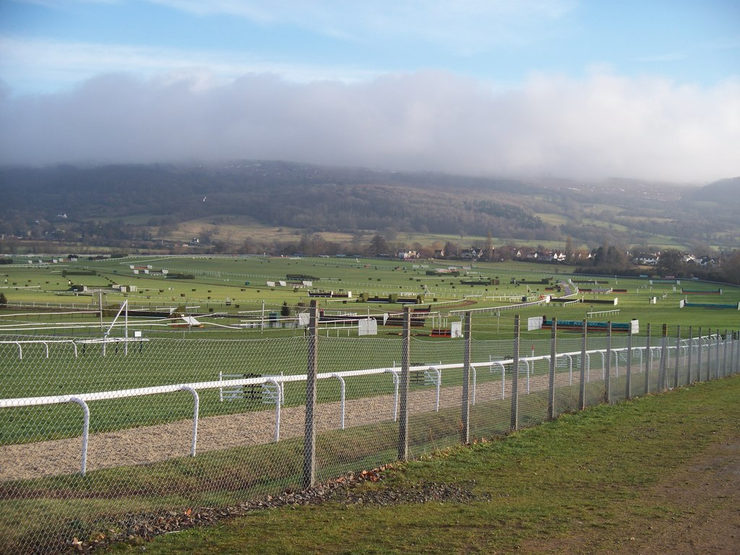 It may not be the most prestigious Gold Cup run at Cheltenham but the Paddy Power Gold Cup is not a contest lacking in reputation. Many view the feature race of November’s Open Meeting as being a highly informative handicap for the season ahead. The chase is contested over a distance a touch further than two and a half miles with all horses aged four and above eligible to compete.

Initially sponsored by Mackeson in 1965 when first introduced, the event has been run under several different guises since. Many of you may know this race as the Paddy Power Gold Cup anyway but the Irish bookmakers pulled their support in 2015 with BetVictor taking their place a year later only for Paddy Power to return in 2020. Sponsorship helps keeps this handicap a valuable one with a prize of £130,000 offered in 2020, a handsome tally for a Grade 3 race.

Horses outside of the top three in the betting half won nearly half of all Paddy Power Gold Cup renewals since 2002. As a result the average starting price of champions in this time is close to 10/1, making it an attractive race for the punters. It’s a price that would be a lot shorter though if those at the very top of the betting could perform more regularly. Favourites haven’t fared well in recent years, Tranquil Sea the last to do the business back in 2009 at odds of 11/2.

You’ll struggle to find a horse without some form of Cheltenham experience on the racecard for this Gold Cup challenge. Former course wins are not as commonplace though. Out of the 17 runners that took part in the 2019 renewal only five had previously enjoyed success at Cheltenham. 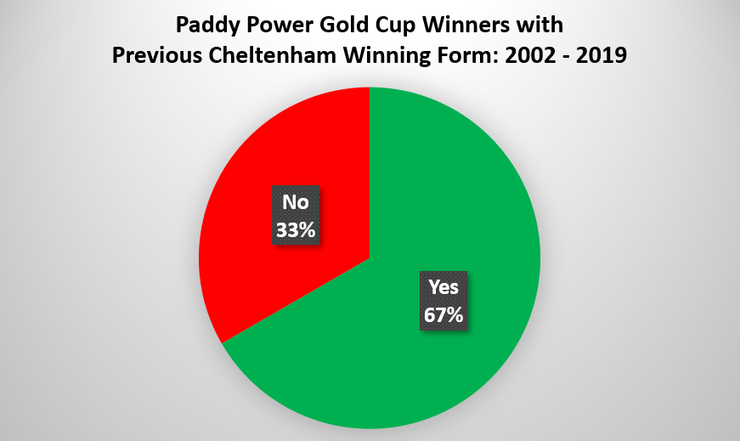 In the renewal prior to that in 2018, seven horses, just over a third the field, boasted a ‘C’ next to their name. Despite usually being outnumbered, those with a New or Old Course win have been first past the post 12 of the last 18 instances of this race. Happy Diva in 2019 and Baron Alco in 2018 became the latest exceptions to the rule but both had twice finished as runners-up previously at Cheltenham.

David Pipe will be hoping he can replicate his father’s unrivalled success in this race but it will take some doing. His dad Martin secured his first Gold Cup winner in 1987 before another seven followed during a dominant 10 year period between 1996 and 2005. Retiring a year after his final winner, the mantle was passed to David and it didn’t take too long for him to get off the mark. Great Endeavour’s win is only time Pipe junior has struck gold in this race though despite his regular presence. As you can see by efforts since, Pipe is in need of some more inspiration if he’s going to close on his dad’s record.

Paddy Power Gold Cup participants rarely go on to hit an elite level although many do enjoy a decent degree of success. It’s not often you ever see them wind up in the Cheltenham Gold Cup later in their career but Imperial Commander was a horse unlike most others. Trained by Nigel Twiston-Davies, the successful chaser claimed his first notable victory in 2008 when winning this race. One season later he then took part in the Cheltenham Gold Cup, priced only behind Kauto Star and Denman in the betting. There he scooped a hugely prestigious win, making him the only horse ever to win both these particular Gold Cups.