The Day 3 highlight at the Ebor Meeting is a real treat for sprint fans, with the Nunthorpe Stakes regularly recognised as one of the top events of its type in world racing. That fantastic reputation naturally helps it attract a high quality field and there are many top sprinters involved each year.

The race was created in 1922 and is named after the area of the city which adjoins the north-east part of the racecourse. It is one of only a few races open to juveniles, resulting in winners ranging from two to nine years old in recent times.

The Group 1 highlight on Day 3 at the Ebor meeting sees the speedballs do battle over the minimum 5f trip, with the race offering £250,000 in total prizemoney. The ground at the track is currently described as good, although the forecast in the lead up to the race remains pretty unsettled, with rain expected on the day.

Open to all runners aged two and above, it is the older performers who have held the edge in recent years, with each of the past eight renewals being landed by a horse aged four or older.

The sprint course at York isn’t particularly noted for its bias, but we do have an interesting trend when it comes to this race, with nine of the past 10 editions having been won by a contender emerging from stall seven or higher. The one runner to break that trend was this year’s favourite Battaash, who scored from stall one 12 months ago. The Charles Hills runner has been handed box three this time around and there is no real reason that class won’t trump trends once again.

This contest hasn’t been particularly kind to supporters of the market leader of late, with just two winning favourites or joint favourites in the past 10 years – handing jolly backers a level stakes loss of -£4.00. There have been some almighty shocks over this period too, including two winners at 40/1 and another at a whopping 100/1! It is hard to see anything like that happening this time around with the jolly here a bona fide star.

There is only really one place to start when looking at this year’s race, and that is with the defending champion Battaash. A three time Group 1 winner over this distance, on ground ranging from soft to good to firm, and also scoring a big tick in the course form box courtesy of that 2019 success here, he’s fully 11lbs clear of the field on official ratings and the one they all have to beat.

This son of Dark Angel enjoyed a productive time of things overall last term in winning three of his five starts, but ended the campaign under something of a cloud when beating only two home in the Prix de l’Abbaye at Longchamp.

Any thoughts that effort may have signalled a decline in his abilities have however been quickly blown out of the water this season. Electric in storming 2¼l clear in the King’s Stand Stakes at Royal Ascot, he was then even better when claiming a fourth King George Qatar Stakes at Glorious Goodwood.

To win that Group 2 prize for the fourth time was an impressive feat in its own right, but made all the more so by the fact that he smashed the track record in the process. That’s some achievement at six years of age, and whilst he will be faced with significantly slower conditions here, it would be a surprise were he not to be the first past the post and defend his crown.

There always seems to be a new kid on the block in the sprinting game, and this year that honour falls upon the Tim Easterby runner, Art Power. Also sired by Dark Angel, this one has tasted just the one defeat in his career to date, with that loss coming in a 6f event on the all-weather on debut.

Dropped to this trip at this track on the second of his two starts last term it was clear a long way from home that he was a class apart from his novice rivals, as he ultimately scored by five lengths at little more than a canter. He was then put away for the season, looking every inch a horse for connections to be very excited about.

Fast forward to the current campaign, and this attractive grey has backed up that juvenile promise, and then some. Routing the opposition in his comeback in another Novice event at Newcastle, he then repeated the dose on handicap debut at Royal Ascot when making a mockery of an opening mark of 97.

It was Group company for the three year old on the back of that, and he once again took the rise in class in his stride to land a Group 3 at Naas. He wades into even deeper waters here, but is very quick, proven at the track, and on a soft surface, and may well give the champ something to think about at odds far more rewarding.

Another three year old very much on the up is the Simon and Ed Crisford runner A’Ali. Unlike Art Power, who was only sighted at a modest level in his first season, this son of Society Rock made a pretty big splash in the sprinting ranks at two.

A winner of three of his five starts last term, including twice in Group 2 company – most notably when coming out in top in a soft ground Norfolk Stakes – he did fall short on his only start in a Group 1. However, it should be noted that that did come over 6f in heavy ground, which was never likely to suit a horse who looks to be all about speed.

Looking to be both in need of the run, and ill-suited to conditions on his comeback at Newcastle this season, he then confirmed he had trained on well when easily beating the talented Liberty Beach in the Group 3 Coral Charge at Sandown. Back up to Group 2 level last time out in the Sapphire Stakes at the Curragh, he posted what must have been close to a career best effort when unleashing an impressive turn of foot down the outside to reel in course specialist Make A Challenge for a cosy one length success. In form, and clearly headed in the right direction, he looks like being a popular each way option.

About the Nunthorpe Stake: The Five Furlong Knavesmire Charge 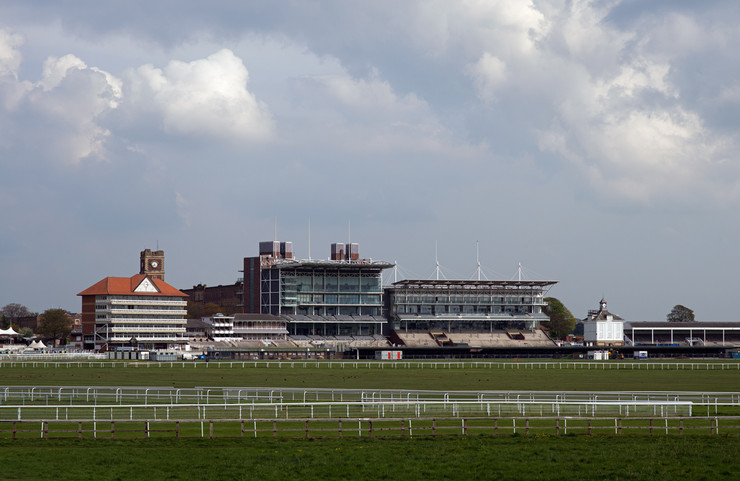 The Nunthorpe Stakes has come a long way from its humble origins as low grade selling race inaugurated in 1903. This is not seen as the true birth of the event though as it was only in 1922 when it first ran under its present format. Handed a sudden boost of prestige following the change, the Nunthorpe, which is named after the area in York in which the racecourse lies, has gone from strength to strength.

Today, races don’t come much bigger on the Knavesmire with this Group 1 sprint among the top five furlong events on the planet. Official recognition of its elevated status came in 2017 when the International Federation of Horseracing Authorities announced it as being the joint best sprint event alongside the July Cup. This award came just six years after the Nunthorpe joined an exclusive list of races that formed part of the Breeders’ Cup Challenge.

What also helps make the Nunthorpe so special is that it provides two-year-old horses with a rare chance to take on their elders on a huge stage. Any horse aged two years and above is eligible to compete, meaning that it also stands as only Group 1 event in Britain where minimum aged geldings can take part.

WINNERS OF ALL AGES

When trying to pick the winner of the Nunthorpe Stakes, don’t think that there is any use whatsoever in looking at a horse’s age. Champions range from the young to the very old in what is a race with a quite uniquely diverse winners list. In earlier decades three and four year olds dominated the sprint but the picture has changed quite substantially in more recent renewals as you can see from the chart below. 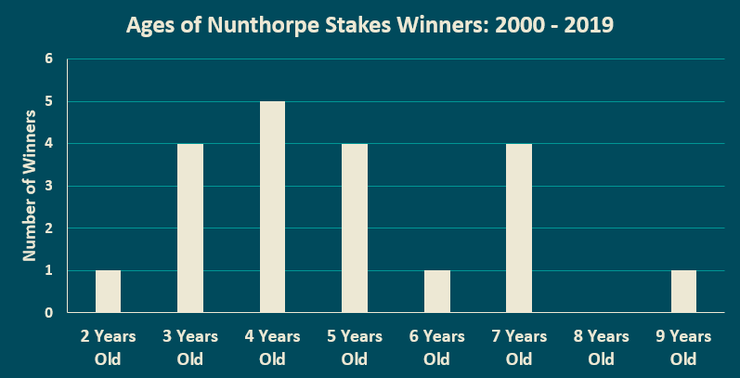 What really catches the eye from the above chart is that we’ve had both a two year old and nine year old champion this century. Kingsgate Native stands as the youngest champion of the race and following his win in 2007, owner John Mayne said he was surprised “that very few two year olds have taken their chance in the Nunthorpe.” Despite his personal feelings, minimum aged horses have a remained a rarity in this race even in spite of their large weight advantage.

Able to attract a top quality array of speedsters from across the globe, the Nunthorpe Stakes always has some strong names heading the betting each renewal. Those tipped to fare best often have the spotlight stolen from them though with only two favourites (including one joint favourite) triumphing during the 16 renewals up to 2019. In the same time frame we’ve seen more than a fair share of genuine shocks such as Jwala in 2013 and Alpha Delphini five years later, both at odds of 40/1.

Providing by far the big upset of the lot though was Sole Power in the 2010 edition of the Nunthorpe. Offering absolutely no form coming into the big race and a low official rating of 104, the eventual superstar failed to get a mention during the pre-race chatter. Setting off at odds of 100/1, nothing at all was expected from the three year old but a strong surge during the final half furlong saw him stun the 6/4 favourite, Starspangledbanner.

Having proven his ability at the highest level for the first time, Sole Power went on to win another eight Group level contests during a very lucrative career.

MAKE IT A DOUBLE?

We’ve already mentioned how Sole Power made history in this race but the son of Kyllachy wasn’t quite done there. Three years after his initial triumph, the distinctive sprinter was back at York winning the Nunthorpe once again. He’s one of ten horses who has successfully won this race more than once, although never previously have the wins come so far apart. Other recent double champions include Mecca’s Angel (2015, 2016) and Borderlescott (2008, 2009).

Of the ten horses who have enjoyed repeat success, two of them have done so on three occasions. Tag End was the first (1928-30) with York specialist Sharpo becoming the next to pull off a hat-trick a little over fifty years later. Given the competition this race attracts, winning it once is hard enough so three times is a feat unlikely to ever be bettered. Sole Power’s record in the Nunthorpe really emphasises the point as the two-time champion also finished third, fourth, seventh and ninth during other efforts.