The Ormonde Stakes takes place at Chester racecourse and is the feature race on the middle day of their three day May Festival.

The inaugural running was back in 1936, with the race named after Ormonde who won the Triple Crown of the 2000 Guineas, Epsom Derby and St Leger Stakes in 1886. The horse was foaled at the Eaton Hall Stud in Cheshire, which lies just 5 miles south of the Chester Racecourse.

At 1m 5f, the Group 3 Ormonde Stakes is one of the longer races run during the May Festival. The starting point for this contest is at the far side of the course with runners traveling around half a circuit to pass the winning post and completing another full circuit.

About the Ormonde Stakes

The Ormonde Stakes is a flat race run in May of each year at Chester racecourse. The first ever run was held in 1936 and won by a horse called Quashed, who had previously won The Oaks in 1935. The race itself is named after the famous racehorse Ormonde who was foaled at Eaton hall in Chester. The very early version of the race was for two year olds only and was run over a distance of five furlongs. However in 1936 that was changed and the race subsequently allowed horses aged three years and older to contend, and the distance was upped to one mile, five furlongs and 75 yards.

Later on in the race’s history, in 1955 to be exact, the race was shortened to one mile, two furlongs and 10 yards, before being reinstated as a 13 furlong affair in 1958. It was from this year that the race was restricted to horses aged four years and older. The Ormonde is seen by many in the racing industry as a trial run for the Coronation Cup which is run a few weeks after. St Nicolas Abbey was the last horse to win both races in the same year in 2011.

The Best of the Best

This Group Three event attracts the very top performing stables from all around the world. This is easily reflected in the list of honours for the race. Lester Piggott and Pat Eddery have both achieved first place a record five times spanning a period of five decades, Piggott having his first in 1959 on Primera, and Eddery having his last in 1999 with Sadian. They were joined by Ryan Moore in 2021 who won with Japan. Moore’s first Ormonde stakes victory was with Harbinger in 2010 and he seems to have every chance of holding the record on his own in the near future having also finished in second place on three occasions. 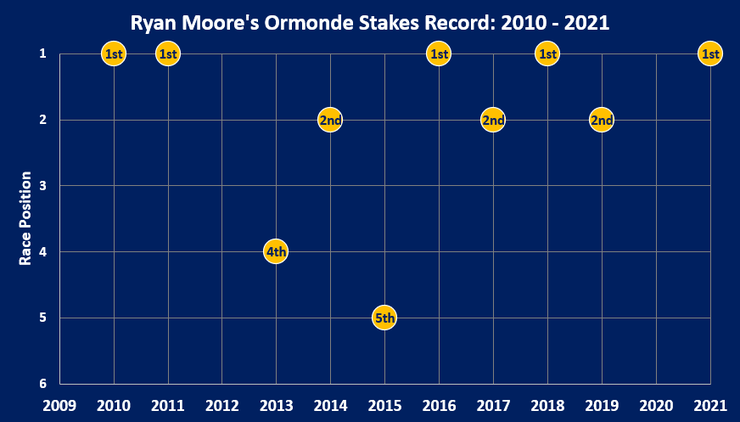 From the training side of the prestigious race it is Sir Michael Stoute who holds the current record on six wins in a period spanning three decades from 1992, when he won with Saddlers’ Hall, to 2016 when he was a winner with Dartmouth. The only trainer still plying his trade today who comes close to Stoute is Aidan O’Brien with five wins. Coincidentally, joint top Jockey Ryan Moore rode two of his winners with Sir Michael Stoute, and two with Aidan O’Brien.

During the entire history of the event there have been three horses who have tasted victory on two occasions, Sovrango in 1962 and 1963, Shambo in 1993 and 1994, and finally St Expedit in 2001 and 2002. When you are searching for your selection in the race it is best to take into consideration what distance the horses have run when they’ve achieved some success. This is due to the fact that a mile and five furlongs is edging towards the longer end of the flat race spectrum, and it is important to be sure that any selection you make can stay the distance.

Coupled with this selection criteria you also would want to look at the most in-form jockeys and trainers leading up to the race, especially for the 13 furlong distance, as well as in the previous years of this race. The previous mentions of Stoute, O’Brien and, on the jockey side, Moore, are all still entering the competition so be sure to keep an eye on their prospects.