The Peterborough Chase is Huntingdon’s most important race of the jump season, celebrating it’s 50th anniversary in 2019. First run as a handicap back in 1969, this Grade 2 has been a key fixture for some of the sport’s greats with winners including Desert Orchid, Wayward Lad, Edredon Bleu and Monet’s Garden.

Henrietta Knight’s treble Cheltenham Gold Cup winner Best Mate won this race in 2002 before going on to take the King George VI Chase and Cheltenham showpiece in the same season. In 2019 the race sponsors are put up £500,000 for any horse who could repeat this accomplishment.

The next race is scheduled to run on 6th December 2020. The race info, trends and tips shown below will be updated for the next renewal once the final declarations have been made.

2m4f is the trip for this Grade 2 Chase contest which offers £65,000 in guaranteed prize money. The ground at the track is currently described as good to soft for Huntingdon’s big race of the season and on a busy weekend of racing this is yet another fascinating contest.

The now-retired Henrietta Knight boasts the all-time lead amongst trainers in this race, with four-time champ Edredon Bleu helping her to a record-setting eight wins. Not far behind though, with six successes – including three in the past six years – is Nicky Henderson, who looks set to be strongly represented in this year’s renewal and could well claim a seventh victory.

Although a weight for age contest, we do also have penalties in play here for previous wins at Listed level or above. Seven of the past 10 editions have fallen to a runner saddled with at least some form of winning penalty and that’s a trend certainly worth being aware of before you rule anybody out.

This is not a bad race for favourite backers – at least in terms of strike rate – with four of the past 10 jollies prevailing. With the prices not being anything to write home about though, supporters of the market leader will have only done fractionally better than break even. Mind you, a profit is still a profit and a winner is better than a loser!

In receipt of the mare’s allowance, the Warren Greatrex-trained La Bague Au Roi may well take some stopping if taking up this engagement, particularly considering her trainer has stated that the Grade 1 King George VI Chase on Boxing Day remains her major early season target. We wouldn’t initially have expected her to line up here, but with her seasonal return at Wetherby ending when being disappointingly pulled up, Greatrex may be keen to get a confidence boosting run into her before the big one.

Twice a winner at the very top level, including when seeing off the talented duo of Topofthegame and Santini in the Kauto Star Novices’ Chase at the Christmas meeting last season, she clearly has the form in the book to take this if at her peak. That effort last time out at Wetherby really was a poor one though, with her jumping being particularly disappointing. Subsequently discovered to be in season that day, she may well have had a legitimate excuse for that subpar performance, and there will be plenty willing to give her another chance.

Heading the Nicky Henderson entry is the ever-popular pocket rocket, Top Notch. One of the most well-liked horses in the Henderson yard, this one may lack the size of some of his rivals but is certainly never found wanting when it comes to guts and will to win. Well used to mixing it in the very best company, the Simon Munir and Isaac Souede-owned runner has one Grade 1 success to his name, in addition to three wins at this Grade 2 level.

Showing all his usual fight and determination when getting back up to beat the talented mare Roksana on his seasonal return at Aintree at the beginning of November, the eight year old would look to be in for another productive campaign. He does hold other entries over the weekend, but with his past seven wins having come at around this trip, we suspect this may be his most likely destination. Fully effective on ground ranging from heavy to good, he looks a solid option and at the prices is the one for us.

A little surprisingly given his overall record in Graded contests, Paul Nicholls has won this race only once before, and not since back in 2004. Nicholls has two amongst the remaining entries, and whilst Dolos wouldn’t be out of this on his very best form, the most interesting of the Nicholls contenders would look to be Black Corton.

One of the most improved performers in training over the past couple of seasons, the eight year old has now won twice at this Grade 2 level, and once in Grade 1 company. At his very best there’s a decent argument that he is the class act of this field. Arriving on the back of a solid seasonal return when failing to concede weight to Vinndication and Regal Encore at Ascot , he would appear to be as well as ever and ought to be suited by the conditions of this contest. Definitely worthy of each way consideration.

Also well worthy of a mention is the Kim Bailey-trained defending champion, Charbel. Twice placed in Grade 1 company – including when second to the brilliant Altior in the Tingle Creek Chase – this son of Iffraaj wasn’t a million miles off being truly top class in his pomp. The 2018 edition of this race saw him put in one of the most scintillating frontrunning displays of the season. Jumping with real panache throughout and keeping up a gallop the rest simply couldn’t live with, he powered right away for an eight-length success at the line.

However, nothing has really gone right since, and it remains something of a mystery as to why that has been the case. Failing to beat a single rival last time out at Exeter, he is going to need to improve markedly on what we have seen of late, but perhaps a return to the scene of his finest hour will help him to rediscover some of that old sparkle.

About the Peterborough Chase: Huntingdon’s Highlight 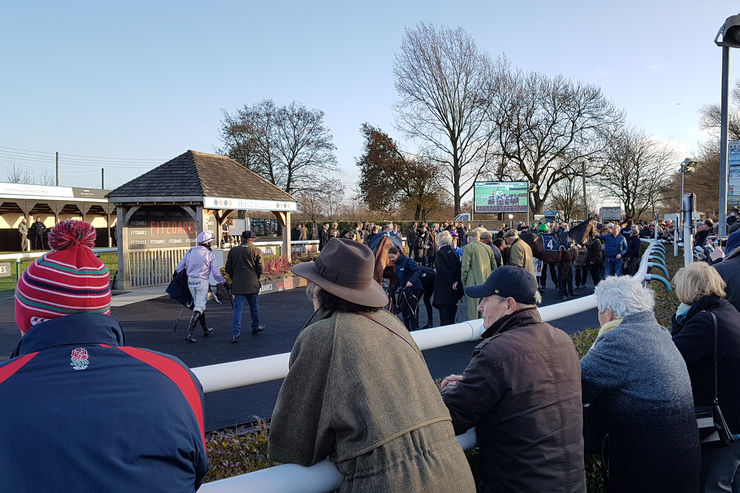 Set in the rolling Cambridgeshire countryside, and featuring a lake in the centre of the track, Huntingdon racecourse is just one of the many picturesque racecourses that British racing has to offer, and it is a track that is well worth a visit.

For fans of high class National Hunt action, the best time to attend would undoubtedly be December, as the 12th month of the year sees the course stage its one and only Graded contest of the season. A Grade 2 chase event open to runners aged four years and older, and held over a distance of 2m4f, the Peterborough Chase is by some way the standout highlight of the season at the track.

The earliest version of this contest took place in 1969, but differed significantly from the event we know today – being run under handicap conditions over a trip of three miles. It wasn’t until the 1978 renewal of the race that the modern version of the contest was truly born, with this being the year in which the event was first held as a non-handicap affair, and was run over the reduced distance of 2m4f.

Bleu Is The Colour

Way out in front when it comes to equine achievement in the race though is the Henrietta Knight-trained Queen Mother Champion Chase and King George VI winner, Edredon Bleu. In addition to those big Grade 1 successes, the popular bay proved just about unstoppable around here, winning an incredible four consecutive editions between 1998 and 2001.

Nicky and Knight Out In Front 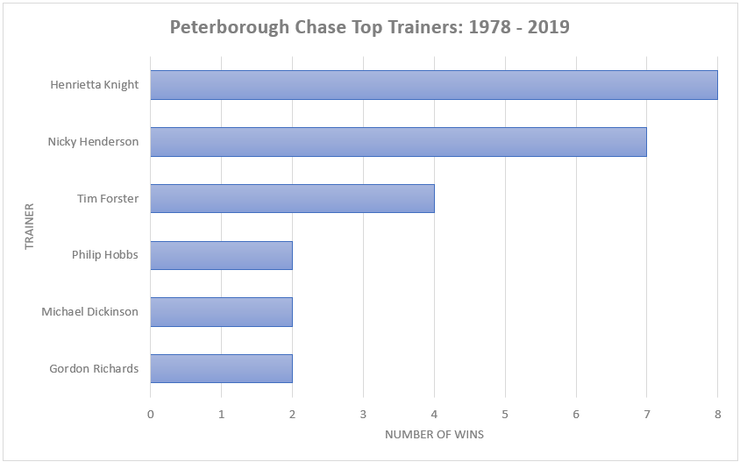 Unsurprisingly it is the trainer of four-time hero Edredon Bleu who heads the trainer table in this race as of 2019. Henrietta Knight was far from a one horse wonder in the event though – racking up eight wins in total, including with the greatest horse she ever trained: the three time Cheltenham Gold Cup winner, Best Mate, who took this in 2002.

As impressive as that total of eight is, Henrietta Knight is retired now, and may soon find herself joined at the head of affairs. Hot on Henrietta’s heels is one the most successful trainers in the game: Nicky Henderson. Having first landed the prize with Arkle Chase and Queen Mother Champion Chase winner Remittance Man in 1992, by the time Top Notch came home in front in 2019, Henderson was winning the race for a seventh time.

Another notable feature of this event is just how well the market leaders have performed. Of the 41 editions to have been held since the race took its current form in 1978, no fewer than 24 have been landed by the favourite. That’s enough for a level stakes profit of 5pts – an impressive record over what is a relatively long period of time.

Other Races of Note at Huntingdon