Racing in mid August is lit up by a real cracker of a sprint contest over in Ireland. Won by the likes of Danehill Dancer, Johannesburg, Caravaggio and Siskin over the years, it often takes a real top-notcher to come out on top in the Keeneland Phoenix Stakes at the Curragh.

The race was first held in 1902 when it was known as the Phoenix Plate, renamed the Phoenix Stakes in 1956, becoming a Group 1 contest in 1979. The Phoenix Stakes was originally run at Phoenix Park racecourse in Dublin, which was opened in the year of the first Phoenix Plate. The track closed in 1990, with the race switching to Leopardstown, moving to its current home in 2002.

About the Phoenix Stakes: Group 1 Action for Two Year Olds

The Phoenix Stakes is a historically significant horse race which is run over a distance of six furlongs on the flat at Curragh race course in County Kildare in Ireland. The contest is a sprint on turf and is held in August of each year. The race itself is comprised of only two year old thoroughbreds, of which both colts and fillies may enter.

The race was first run in 1902 and the victor of the first event was a horse by the name of Bushey Belle. The contest was originally named the Phoenix Plate, and was given its name due to the fact that it was run at Phoenix Park Racecourse, although it was also known informally as “the 1500”, and was run over the shorter distance of five furlongs.

In 1956 the event was renamed the Phoenix Stakes, and in 1971 was given a Group 2 status. The race was upgraded in 1979 once again to become a Group 1 contest. In 1982 the Leopardstown racecourse had the honour of holding the Phoenix Stakes, and when it returned to Phoenix Park in 1983 the distance was extended to six furlongs. When Phoenix Park closed in 1990, the event was once again held at Leopardstown in 1991 through to 2001; it was subsequently moved to the Curragh in 2002.

There are some truly astonishing records when looking at the list of winners over the years in this prestigious event. Starting off with Sue Magnier who has owned or part owned no less than 19 winners; she certainly has some sort of recipe for success. Not far behind her is the trainer Aidan O’Brien who has trained an amazing 17 winners, beginning in 1998 with Lavery, and achieving his last success in 2022 with Little Big Bear. What is even more impressive is his dominance since his very first win, as he also won 16 out of the 20 runnings of this contest between 1998 and 2017.

There are many renowned jockeys to have claimed the honours here over the years, but the record holder, who has ridden five different winners in the Phoenix Stakes, is Michael Kinane. He scored his successes over a 20 year period, from 1983 with King Persian to 2003 when he struck a win with One Cool Cat. From the table below you can see which notable jockeys have won in this event more than once, dating from when the race became a Group 1 in 1979 to 2021. 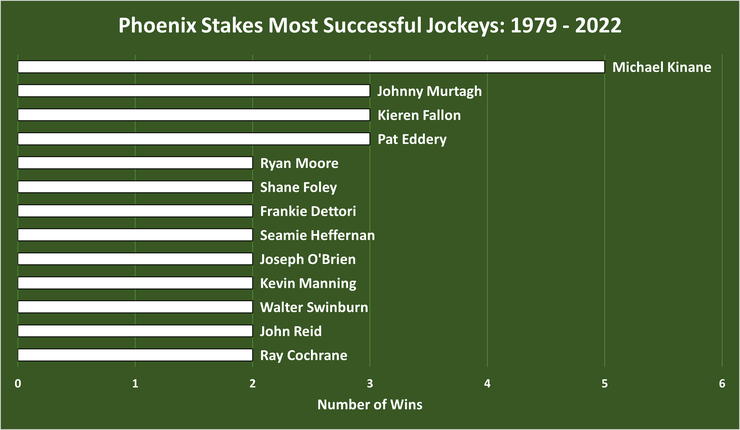 A Cut Above The Rest

When trying to find trends from years gone by in order to try and gain an advantage when choosing a horse to back, there really is one person that you need to consider first, and that is none other than 17-time winning trainer Aidan O’Brien. Having won 68% of the renewals run since 1998, he really is a large part of the winning formula needed to claim first prize at the Curragh. What makes for interesting reading is seeing who he has chosen to ride his horses, as he has had much success over the years with many different jockeys.