The opening race on the Saturday of Cheltenham’s November Meeting is the Grade 2 Triumph Trial Juvenile Hurdle.

The race, registered as the Prestbury Juvenile Hurdle, was first run in 1987 and, as the current name suggests, is a key preparation race for the Triumph Hurdle at the Cheltenham Festival the following March.

This Grade 2 contest takes place on the second day of Cheltenham’s excellent November Meeting and sees the field tackle a trip of 2m½f. There is £26,000 in total prize money on offer in this event, with the ground at the track currently described as good to soft, though there could be significant rain on the way before this runs.

Paul Nicholls leads the way amongst the trainers here having landed the prize on five occasions in the past, most recently with Quel Destin in 2018. Nicholls will have high hopes of adding to his tally still further this year as he saddles the current market leader, Hell Red, who goes in the same Sir Martin Broughton & Friends colours that were carried to success by Quel Destin.

Of the riders on show, only the two Harry’s, Cobden and Skelton, have previously come home in front here. Cobden will be aboard the aforementioned, Hell Red, whilst Skelton gets the leg up on Cabot Cliffs for brother Dan.

This has been a rock-solid race for those towards the head of the market, with all bar one of the past 10 winners having returned an SP of 4/1 or shorter. That sequence includes five winning favourites, handing supporters of the jolly a level stakes profit of £1.29.

Formerly with Guillaume Macaire, this son of Martaline finished second on his sole start in France before making the switch to the Paul Nicholls operation at the beginning of October. He has had just the one start for Nicholls since, but could scarcely have been more impressive when absolutely routing the opposition, to the tune of 12 lengths, over this trip in a good ground juvenile event at Chepstow. This represents a significant step up in class from that Class 4 contest, but there are reasons to believe that that performance may have been even better than it first appeared, and he may well prove up to the task.

Watching that Chepstow race back, one of the most notable aspects of Hell Red’s display was just how high his knee action was, suggesting that he wouldn’t have been in love with the fairly quick surface that day, and may be seen in a better light on softer ground. That impression was backed up by Nicholls in the aftermath, with the trainer asserting that, “Hell Red won’t be seen to good effect until he can run on soft ground”. Quite a statement following a 12-length victory!

As a full brother to Hell Boy, who was a dual graded winner on soft and heavy ground, Hell Red’s breeding also suggests improvement may be forthcoming once granted an easier surface. As such, the forecast rain in the area seems most likely to be in the market leader’s favour.

With a name like that, the second favourite for this race would certainly be at home in the yard of the famously duffle coat-attired Nigel Twiston-Davies. However, this four-timer-seeking contender in fact hails from the yard of Irish Supremo Gordon Elliott. Having not had a runner in this race in the past 10 years, and having initially touted slightly lower grade targets, it looks very interesting that the shrewd Elliott has now ultimately plumped for this option.

Looking through the form of this son of Alhebayeb though, this does look to be the most logical next step up the ladder. Noted as being on the small side, he may lack when it comes to size but does appear to boast an impressive engine and can have done no more than win his three starts to date with the minimum of fuss. Impressive in scoring twice at a much lower level back home in Ireland, he was then brought over to Britain for the first time to take in a Listed event at Wetherby last time out, and promptly produced his biggest winning margin yet.

Whilst not responding immediately to the urgings of Jonathan Burke in the saddle that day, it became clear approaching the final flight that he was clicking into a gear the others couldn’t match. Eight lengths clear of the 128-rated Hiconic at the line, he looked a horse going places that day and may well be up to this step up in class.

Another ex-French runner of some interest is the David Pipe representative, Adagio. Making only his fifth career start here, this one is already under his third different set of owners and third different trainer. Pipe seems pretty excited to have him under his care now though, and on the form he has shown at the track to date it’s easy to see why.

Showing promise when placed in his opening two starts on the flat as a juvenile, he then made a huge impression when stepped up to 1m4f on his first start at three when scooting clear for an eight length success at Clairfontaine. With that effort coming in heavy ground, it appeared that stamina may be this one’s strong suit and a career over hurdles beckoned – hence the switch to the Pipe operation.

Given a fairly gentle introduction to this sphere in a Class 4 event at Warwick only last week, the bay gelding was much too good for his rivals in pulling seven and a half lengths clear in the straight. That effort can probably also be upgraded as his jumping almost completely fell to pieces over the final two obstacles. He can surely only improve in that regard though, and Pipe clearly saw enough encouragement to step him right up in class for his next assignment. An interesting each way contender.

The Cheltenham Festival is the biggest meeting in the National Hunt season. Every trainer and owner in jumps racing wants to be able to land a winner at Cheltenham but it takes a huge amount of work for that to happen. There are so many different routes into each of the races at the Festival that it can be a little difficult to keep track but you’ll get no prizes for guessing which race the JCB Triumph Trial Juvenile Hurdle acts as a trial for.

The similarities in the JCB Triumph Trial Juvenile Hurdle and the Triumph Hurdle itself are many so it is always a race on which to keep a close eye. It is also a Grade 2 contest with a decent prize fund of over £30,000 that attracts entries from some powerful yards so it is more than just a stepping stone.

A Race of Many Names

The name may have changed but the nature of the Prestbury Juvenile Novices’ Hurdle has remained much the same over the years. It has always been open to three year olds and the trip has only been increased by 87 yards from the original distance of two miles (racecards state the trip as two miles and half a furlong).

Three is a very young age for National Hunt horses. Even if this is not the most taxing race in terms of distance or the obstacles which must be navigated, it still often requires an unusually mature performance to win. Perhaps the most well-known horses who had enough to win the JCB Triumph Trial Juvenile Hurdle were The French Furze (Fighting Fifth Hurdle winner 2003), Al Eile (Aintree Hurdle winner 2005, 2007, 2008) and Katchit (Champion Hurdle winner 2008).

Of those three famous graduates, Katchit was the only one to follow up his win with success in the Triumph Hurdle itself at the Cheltenham Festival. Alan King’s charge was the second horse to complete the double after 1998 winner Katarino with Defi Du Seuil doing likewise when he won the 2017 Triumph Hurdle. Three winners in over 30 years to graduate to the main race doesn’t mark this out as a great Triumph Hurdle trial in all honesty. You can see the full record of Triumph Trial Juvenile Hurdle winners in the Triumph Hurdle in the chart below. 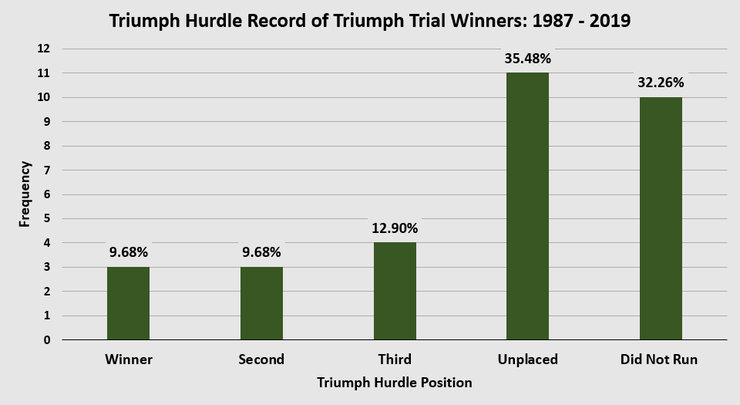 The main reason for the relatively poor record is that, very simply, the quality of horses competing in the actual Triumph Hurdle race is significantly higher. Some of those high class competitors have also had a taste of Cheltenham before their trip to the Festival which further reduces the efficacy of the trial in producing Triumph Hurdle winners. Moreover, these young horses are unpredictable so winning favourites are far from the norm in either race and even those who have the experience of the Triumph Trial Juvenile Hurdle can easily have an off day at the Festival.