Newmarket’s July Festival, one of the liveliest social occasions of British racing. It is a three day meeting in early July which runs Thursday to Saturday. Helping to spice things up on the opening day is the Princess Of Wales’s Stakes.

The race was inaugurated in 1894 and during its early days, this race was one of the most prestigious events on the racing calendar. Three Triple Crown winners won this as four year olds in the race’s first ten years. Whilst it doesn’t carry quite the same reputation today, the Group 2 contest still attracts a good quality field.

This race is increasingly targeted by stayers, with St Leger, Ascot Gold Cup, Goodwood Cup and Melbourne Cup winners all featuring on the list of recent victors.

This Group 2 contest offers £57,200 in total prize money this year, and sees the runners tackle 1m4f of Newmarket’s July course. The ground at the track is currently described as good to firm but, with heavy rain forecast, is expected to ease come the day of the race.

This race may be open to all horses aged three and older, but the younger performers have struggled in recent years, with each of the past 10 renewals having been won by a runner aged four or older. It is the four year olds who have fared best, having registered a total of seven wins over this period.

Having recorded nine previous wins, it is Sir Michael Stoute who holds the all-time lead amongst trainers in this race. A little surprisingly, Stoute doesn’t hold an entry this year, but of the trainers who are on show, it is Mark Johnston who boasts the best record, with five previous wins to his name.

This has been a pretty tough race to call in recent times, with just the one winning favourite in the past 10 years – handing supporters of the market leader a level stakes loss of £4.00. There have been three winners at a double figure price over this period, including Communique who came home in front at odds of 11/1 in 2019. That Mark Johnston-trained runner lines up once again this year as he bids to defend his crown.

John Gosden has two previous wins in this event, but none since saddling Lucarno to victory back in 2008. That’s quite a long interval for a trainer who generally does well in this type of event, but the market would suggest that the Newmarket handler may well be back in the winner’s enclosure following this year’s edition.

It is Gosden’s five year old mare Enbihaar who sits atop the betting and there’s certainly plenty to like about this consistent and classy performer. Lightly raced for one her age, the Hamdan Al Maktoum owned runner enjoyed an excellent campaign in 2019 – winning four of her six starts. The fact that three of those successes came in this Grade shows she belongs at this level, and having twice won at 1m6f, she certainly won’t be found wanting in the stamina department. With all four career turf wins coming on good or faster going, significant rain would pose a question, although she did finish an excellent third in a soft ground Group 1 on her final start last season. This mare possesses plenty of heart and ought to go well with Jim Crowley in the saddle.

Godolphin have claimed top spot in two of the past three editions of this event, and would look to have solid claims of improving that recent record still further in 2020. Carrying the famous royal blue silks this time around is the Charlie Appleby-trained five year old, Old Persian.

William Buick takes the ride aboard this son of Dubawi, and it is a ride he is most likely looking forward to. Buick clearly gets on well with Old Persian having already partnered him to success five times in the past, including in the Group 1 Dubai Sheema Classic out in Meydan last season. Having proven that top flight success to be no fluke with an authoritative victory in a Grade 1 at Woodbine back in September, Old Persian is a notch above this level when at his peak, and is unsurprisingly the top rated runner in the field.

The fact that he doesn’t head the market is most likely a result of what was a seriously underwhelming comeback at Saint-Cloud last time out. Having trailed home last of the five runners in France, he will clearly need to step up here, but it wouldn’t be the biggest surprise had he simply needed the outing that day, and he can go well sporting the first time cheek pieces.

Given their excellent recent record in the race, there will no doubt be plenty of punters looking to side with a four year old contender. Just the two fall into that age bracket this year, in the shape of Dame Malliot and Antonio De Vega, with the market – and the form book – suggesting it is the latter who boasts the strongest claims.

One of the most versatile performers in the field, having recorded wins from seven furlongs to a mile and a half, and on ground ranging from soft to good to firm, this Ralph Beckett-trained mare at least seems likely to cope with whatever the ground conditions are on the day. The question is whether she is quite up to this class, as she is yet to score at above Group 3 level. That said, she did only go down by three quarters of a length in a German Group 1 last season, and with a Listed victory at Pontefract on her seasonal return likely to have blown away the cobwebs following a 225 day break, she is another who is fancied to run a big race.

About the Princess of Wales’s Stakes: Unpredictable and Exciting Race at HQ

Newmarket has been home to many of the finest horses and trainers in the history of British flat racing. The proximity to so many top yards means that Newmarket Racecourse hosts a series of top quality contests during the flat racing season. The Princess of Wales’s Stakes is one such race.

One of the real joys of this race is the variety of competitors it attracts each year. It is open to three year olds but has been won recently by horses as old as eight and the middle distance trip attracts stayers coming down in trip as well as horses with a greater turn of foot testing their stamina. That variety makes this an unpredictable and exciting race for racing fans and punters alike.

It took no time at all for the Princess of Wales’s Stakes to prove itself to be a race of the highest calibre. The very first winner of what was then a one mile race was Isinglass, a horse who was a genuine superstar of the time thanks to his completion of the Triple Crown just one year earlier.

The Princess of Wales’s Stakes was increased in trip to 12 furlongs (one and a half miles) in 1902. Inevitably that changed the nature of the race considerably but it still attracted very strong fields as a middle distance race. Indeed, the strength of the winners over the decades that followed saw the race become a Group 3 event when the system of grading was introduced in 1971 before being promoted to the Group 2 level in 1978.

Now held every year in July, the Princess of Wales’s Stakes is a chance for younger horses to be tested against open company. As of 2020 only three three year olds have won in 31 years but many recent winners are still finding their feet. 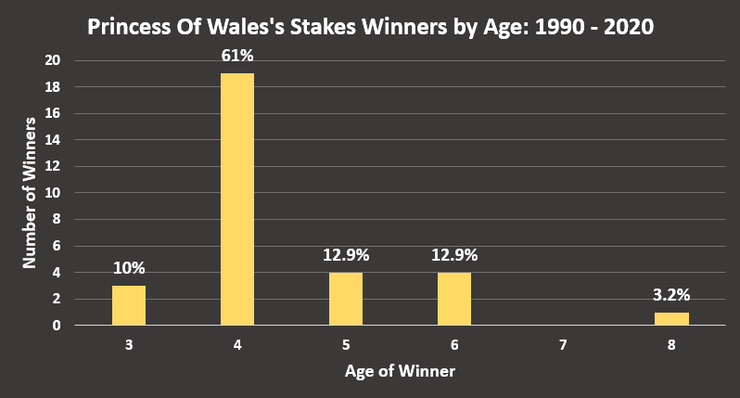 This is a middle distance race but it often goes the way of high class stayers. Winner of the St Leger in the year 2000, Millenary won this one in both 2002 and 2003, whilst Big Orange, who won the Goodwood Cup and the Ascot Gold Cup, won the Princess of Wales’s Stakes in 2015 and 2016.

Millenary and Big Orange joined an elite list of just five horses to have won the Princess of Wales’s Stakes twice. Lance Chest (1912 and 1913), Primera (1959 and 1960) and Lomond (1965 and 1966) complete the list with no horse winning the race more than twice. The 2019 winner Communique came close to a famous double, finishing second the following year having led the race in the final furlong.

Sir Michael Stoute is the most successful trainer in the race’s history with an impressive nine wins ranging from Shardari in 1986 to Fiorente in 2012. Lester Piggott holds the record for the most winning rides as a jockey with his eighth win coming an incredible 32 years after his first.