It’s hard to pick out a standout contest on British Champions Day at Ascot, but if the list of recent winners is anything top go by, there is certainly a case to be made that the one-mile Queen Elizabeth II  Stakes is the best of the lot.

French star Solow, Breeders’ Cup Classic winner Ravens Pass, wonder filly Minding and the greatest of all time Frankel all feature on the roll of honour in the past decade alone.

The QEII was first run in 1955 having taking over from the Knight’s Royal Stakes which had taken place for the previous eight years, renamed in honour or our reigning monarch.

The top mile performers take to the stage for one of the highlights on British Champions Day at Ascot, in this Group 1 event which offers a mouth-watering £650,000 in total prize money. The going at the track is currently described as soft.

Saeed bin Suroor boasts the all-time lead amongst the trainers in this race with five previous successes. The Godolphin handler is not represented this year though, and snapping at his heels on four wins apiece are the training powerhouses of John Gosden and Aidan O’Brien. Gosden saddles the red-hot favourite Palace Pier and Nazeef this year. Meanwhile, O’Brien sends three to post in the shape of Circus Maximus, Lancaster House and Royal Dornoch.

A clash between the best of the milers from the Classic generation and the older runners, it is the three year olds who have held sway in this – winning 31 of the past 50 editions, including seven of the past 10.

King Of Change caused a minor shock when winning this at odds of 12/1 this time last year, but overall this has been one of the better events on the Champions Day card for the market leaders. The past decade has seen five favourites come home in front, handing jolly backers a small level stakes profit of £1.12.

As mentioned, this has been a good race for favourite backers in terms of strike-rate, and also a strong contest for John Gosden, who has sent out two of the past three winners in the shape of Roaring Lion and Persuasive. It is the Newmarket handler who is responsible for the clear market leader this time around, with his unbeaten Kingman colt, Palace Pier, being odds-on across the board.

A perfect five from five in his career to date, one might have thought that a tilt at the 2,000 Guineas would have been on the cards following two impressive successes in his juvenile campaign. However, Gosden has opted for the more patient approach with this good-looking bay, and it is an approach which appears to be paying dividends.

Returning with a smart success in a Novice event at Newcastle, he then conquered the 2,000 Guineas second and third placed finishers when getting up in the closing stages to bag the St James’s Palace Stakes at Royal Ascot. He then showed that to be no fluke when mastering smart filly Alpine Star, Queen Anne Stakes champ Circus Maximus, and 2019 French 2,000 Guineas winner Persian King in another Group 1 over in France. That’s rock solid form and, proven on ground ranging for heavy to good to firm, he may well take some stopping.

The French have taken two of the past six renewals of this courtesy of Freddy Head’s back-to-back successes with Solow and Charm Spirit in 2013 and 2014. Francis-Henri Graffard’s The Revenant narrowly missed out on improving that Gallic record when second in the race 12 months ago, and returns for another crack at the prize in 2020.

A hugely consistent performer, this five year old by Dubawi has won nine of his 12 career starts to date, and not once finished outside of the first three. Five times a winner on soft or worse going, he has no questions to answer regarding the ground, and arrives on the back of a strong performance when outsaying his rivals in a heavy ground Group 2 at Longchamp last time out.

That was a particularly impressive display considering it was his first outing in almost a year, and a run which ought to put him spot on for this. He couldn’t quite get to King Of Change in the race last year, but did begin his challenge from further back that day, and had closed the gap to just a length at the line despite suffering interference close home. If in the same sort of form this year, he seems unlikely to be too far away.

Another runner who merits plenty of respect around here is the Aidan O’Brien-trained Circus Maximus. The other two O’Brien runners, Lancaster House and Royal Dornoch do make some each way appeal at big prices; but it is this four year old son of Galileo who appears most likely to hand the Ballydoyle maestro a fifth success in the race.

Three times a Group 1 winner over this trip, there seems to be something in the Ascot air that brings out the best in Circus Maximus, with two of the colts three top level wins having come at this venue. Successful in the St James’s Palace Stakes on the round course here in 2019, he then landed a second Royal Ascot success when toughing it out close home over this course and distance in this season’s Queen Anne Stakes. He will admittedly need to improve on his two most recent outings, when well beaten in back to back Group 1 contests over in France, but he has been given a nice break to freshen him up following the most recent of those efforts. Now returning to his favourite venue, it would be no surprise to see him put up a bold showing.

About the Queen Elizabeth II Stakes 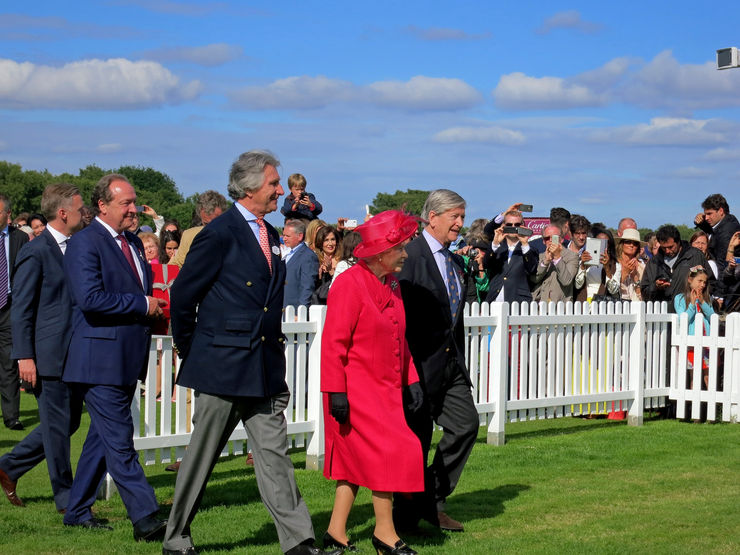 British Champions Day has quickly become one of the most important and anticipated days in the flat racing season. Each of the five races that take place on the big day at Ascot are hugely valuable but only the Champion Stakes and the Queen Elizabeth II Stakes have total prize money in excess of £½ million in 2020.

The Queen Elizabeth II Stakes is the fourth race of the day at British Champions Day and the final of the Mile Series. It’s open to all horses aged three and older but winning a place in the Group 1 contest is subject to performance in the races which precede it: the 2000 Guineas, the Lockinge Stakes, the Queen Anne Stakes, the St James’s Palace Stakes, the Sussex Stakes and the Sun Chariot Stakes.

The Mile Series really kicks off with the first Classics of the season. The sort of performance required to win the 1000 and 2000 Guineas has tended to favour specialist milers over the sort of horses who go on to have success at one and a half miles or longer. By the time we get to the closing stages of the season those who compete in the Queen Elizabeth II Stakes have already shown that one mile is their ideal trip and it always takes a performance of the highest calibre to win.

The very best horses to have won the Queen Elizabeth II Stakes have stepped up to win at longer trips but even the great Frankel did his best work over 1 mile so this is very much a contest for those with the tools for the job over 8 furlongs.

It’s also tended to be a race for younger horses. Just a handful of horses aged older than five have won in the last few years and not a single six-year-old in the race’s history. 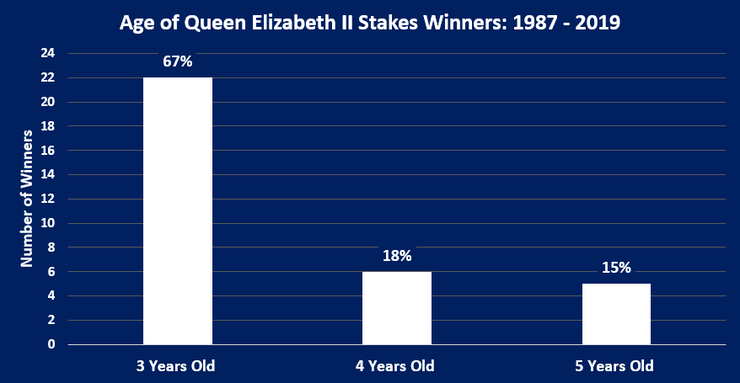 Part of the reason for that is that horses tend to step up in trip as they age. Four and five-year-olds who have stuck around at one mile and continue to win big races should be considered as well as members of the Classic generation who ran well in either of the Guineas and sometimes even in the Derby and the Oaks.

The races which make up British Champions Day all took a major boost to their already strong reputations when it was introduced. The Queen Elizabeth II Stakes was one of the few that already held Group 1 status before 2011 having built up a lot of prestige since being introduced in 1955.

The promotion from the Group 2 level that it was initially given in 1971 came in 1987. That hammered home the importance of this race as if it were needed and it stepped up a notch in 2008 when it was added to the Breeders’ Cup Challenge, offering a spot in the Breeders’ Cup Mile. It is no longer part of that series as of 2012 but it became an even more valuable prospect for trainers and owners in 2011 when the prize find was quadrupled to a cool £1 million. This was reduced to £650,000 for 2020. 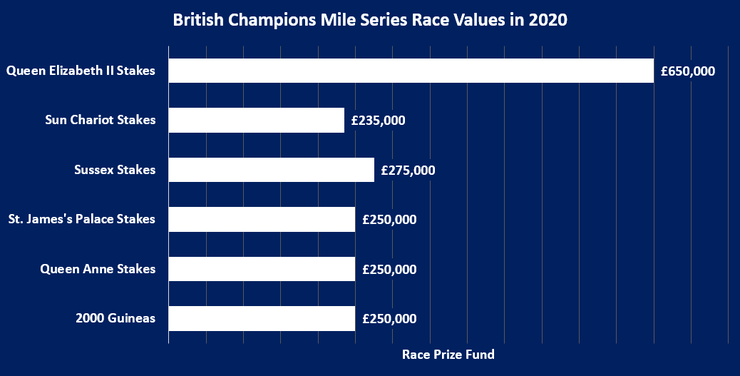 Big name horses, jockeys and trainers will continue to thrill racing fans during the race known as the QEII but its records are historic and may well last the test of time. The only two horses to win the race twice – Brigadier Gerard and Rose Bowl – did so in the 1970s whilst Willie Carson is the most successful jockey with the last of his eight wins coming in 1995.

The record wins for trainers and owners are, however, more recent with Saeed bin Suroor and Godolphin holding those honours respectively.