The fillies take centre stage in one of the main attractions on day three at Royal Ascot (moved to day one for 2020) in this contest run over The Oaks trip of 1m4f.

It’s rare for an Oaks winner to attempt the double by competing in this Group 2 contest, but those to have taken part at Epsom do regularly line up.

When the race was first run in 1919 it was open to all horses aged three or four but has been restricted to three-year-old fillies since 1950.

One and a half miles is the trip for this Group 2 flat contest which is set to be run on good ground at this year’s Royal Ascot. It offers £110,000 in total prize money.

Only twice have we previously seen Trefoil out in action but she has done enough to impress us in this time. Her debut at Newmarket was a victorious one despite plenty of competition in the Class 2 contest. After beginning a little slowly, she soon found her stride and demonstrated too much speed for her rivals late on. Having flourished on this first competitive showing, Ralph Beckett tried the filly in the Listed quality Pretty Polly Stakes.

Slightly troublingly, Trefoil started this race in sluggish fashion too but again she soon found her stride, moving up to second three furlongs out. It was only by the line of the 1m2f contest that she narrowly surrendered second place so her stamina is not a major concern. Although she stood no chance with the winner, it is important to remember this race came after a near eight month break. After such a lengthy absence, it’s fair to think we did not see the very best of Trefoil at Newmarket earlier in the month. With a recent run now under her belt, we are backing this filly to go all the way at Ascot.

Favourites have only won one of the last eight Ribblesdale Stakes renewals, a less than promising omen for this year’s market leader, Frankly Darling. The daughter of Frankel does however have the benefit of working with two top names in the business. Trainer John Gosden is a former three-time Ribblesdale winner while the legendary Frankie Dettori stands as the event’s all-time leading jockey. Clearly a filly in good hands, we are fully expecting a solid, albeit perhaps not winning run from her this Tuesday.

The effort that cemented her place as the race favourite was her dominant victory in Newcastle’s Betway Maiden Stakes. In a near text-book display, the three year old patiently waited before launching a powerful attack late on. As good as the showing was, you do have to bear in mind two factors. Firstly, this was a contest ran on artificial ground that was towards the slow side. The good ground at Ascot this weekend means the pace will be much brisker. Secondly, the Frankel offspring was competing in class five company making this a huge step up. While not an impossible one, past winners tend to have competed at a distinctly higher level in their last run before Ascot.

John Gosden does not just have the one strong contender for this Group 2 race. Frankly Darling is joined by stablemate Miss Yoda, another runner who is worthy of some consideration. Although seen as the slightly weaker of the pair, she does approach this race off the back of strong win at Linfield earlier this month. After settling down following some commotion in the stalls, the German filly looked completely focussed and unflustered despite being tight on space at times.

It was anyone’s race with a furlong to go but Miss Yoda’s superior stamina saw her finish just over a length ahead of her nearest competitor. Facing a near identical trip this week, her stamina will come in handy again as she attempts to shake off the competition. A 1m4f trip looks ideal but we do have some concerns about the speed of the contest. This filly is not blessed with great pace and the horses can reach quite the gallop on Ascot’s long straight when the going is good. Subsequently, we have doubts if Miss Yoga has what it takes to pull clear in the final stages.

It would be a huge oversight on our part if we failed to focus on the credentials of Aidan O’Brien’s strongest entry, Passion. The Irish trainer has saddled the Ribblesdale winner on three of the last six occasions and he is eager for more success here. To prepare for this contest his Galileo filly found herself competing in Navan for the Listed Salsabil Stakes. A fancied favourite that day, the three year old could only manage a fourth placed finish after lacking any real turn of speed in the closing stages.

Every indication is that a longer trip will suit Passion, a horse whose sire won some top 1m4f races himself. A place finish looks a very realistic achievement for her here but we are stopping short of expecting more than that.

Having finished seventh of nine last time out, Born With Pride lacks the same kind of form many other Ribblesdale contenders boast. The filly ended up easily beaten at Kempton too, trailing Berlin Tango by a full eight lengths. We would not be too critical of this showing though, after all it was her first effort in seven months. In addition, many horses do not adjust well to the artificial turf present at Kempton, much preferring to run on real turf. She certainly started slowly on the Polytrack and from this point on it was always an uphill battle. Improvements are therefore likely for the former Newmarket winner but not to the point where we can see her winning this race.

About the Ribblesdale Stakes

The end of World War I brought about the introduction of the Ribblesdale Stakes in 1919. Its name honours the 4th Baron of Ribblesdale who served as Master of the Buckhounds between 1892 and 1895.

Initially it was a one mile contest open to horses of both genders but both these aspects of the race have changed since. Today it stands strictly for three-year-old fillies and is run over a distance of one and a half miles.

For a small number of fillies that run in the Epsom Oaks, usually not the leading players, the Ribblesdale Stakes ends up being their next challenge. Those that perform well in the test at Ascot occasionally find themselves entered in the Irish Oaks the following month. Few runners have been able to replicate their success across the Irish Sea, although Star Catcher and Bracelet did pull off the rare double in 2019 and 2014 respectively.

THE OAKS A POOR GUIDE

With the Epsom Oaks also a one-and-a-half mile contest strictly for three year old fillies, you might expect this to be somewhat of an Oaks re-match. There’s not a great deal of overlap between the two however with usually only one or two names entering in both races.

The Ribblesdale, despite being a well-respected race with not inconsiderable prize money on offer, remains a modest step down from the Oaks. As a result, what happens at Epsom is usually of little help when trying to figure out who might win this race as the table below shows.

In 2020 the Oaks took place after the Ribblesdale Stakes meaning this race became a pointer for the following fillies’ Classic.

Irish Oaks Often the Next Step

In terms of forecasting the result of the Irish Oaks, the Ribblesdale result has become increasingly useful in predicting how runners will perform in the Classic having often been of little help before the last decade. As previously mentioned, Bracelet won both races in 2014, with Star Catcher doing the same in 2019, meaning two dual winners in the space of five years. These two were the only fillies to pull off the feat in 20 years however.

Ribblesdale victors have regularly tried their luck at the Curragh, the month after their Ascot victory, with varying success coping with the step up in quality. That said, every Ribblesdale winner between 2010 and 2019 took part in the Irish Oaks, with only two finishing outside of the top five. By examining the results of recent renewals, we can see that you’ll want to approach the Ribblesdale champion with some caution in the Irish Classic should they make the trip over the Irish Sea, though they may well be in the frame. 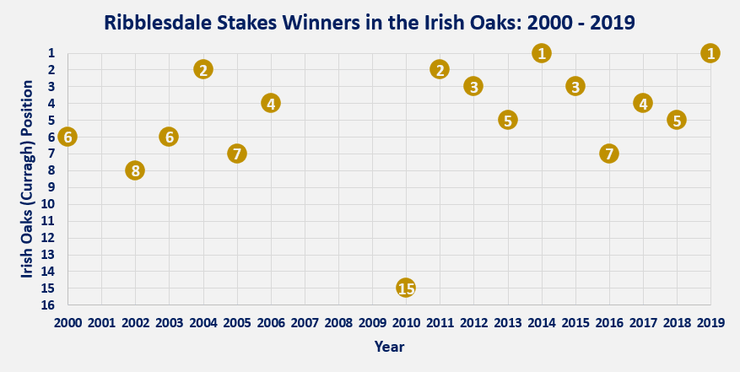 No trainer has won at Royal Ascot more times than Sir Michael Stoute but it’s been a very long time since the veteran trainer celebrated success in this Group 2 contest. His most recent win, came during the third renewal of the new millennium, when Spanish Moon was victorious in 2003.

You can’t accuse him of not trying to add to his record in this contest but his luck appears to have dried up. The knighted trainer regularly has a filly involved but none have had quite enough to win this race. Mori came agonizingly close in 2017 but lost out to Coronet during the final few strides.