The Supreme Trail Novices’ Hurdle, officially the Sharp Novice’s Hurdle, is the last of the Graded contests on the Sunday on the Cheltenham November Meeting.

This was run for the first time in 1987 and is a trial race for the Supreme Novices’ Hurdle which is the traditional curtain raiser at the Cheltenham Festival.

The list of previous winners boasts an array of quality horses including Cue Card, Dodging Bullets and Altior.

About the Supreme Novices’ Hurdle Trial

As the first race of the Cheltenham Festival, the noise that greets the start of the Supreme Novices’ Hurdle is unlike any other race. Winning the hugely important Grade 1 is the culmination of a lot of hard work including runs at any number of trials. As the title suggests, the Sky Bet Supreme Trial Novices’ Hurdle run at Cheltenham’s November Meeting is one such important trial and so is always worth paying attention to, even so many months before the main event the following year. 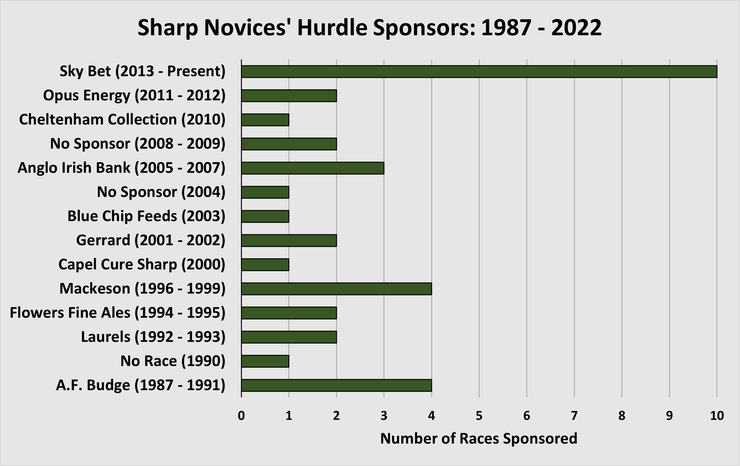 The name isn’t the only thing to have changed with this race though. The inaugural contest was open only to three-year-olds before the age restriction was quickly lifted with the contest subsequently open to all novice hurdlers aged four and older. The distance is another thing that has changed over the years, from 2 miles initially, to 2 mile 1 furlong between 1992 and 1994, and then to the current trip of 2 miles ½ furlong.

The Grade of the Sharp Novices’ Hurdle is one of the most stable elements of the race. It first achieved Grade 2 status in 1989 where it has remained ever since. That grading has helped to attract many high class horses who are embarking on the early stages of their jumps career with several going on to compete at the Cheltenham Festival.

Altior is one of a high number of promising (just a slight understatement in hindsight) horses to use the Sharp Novices’ Hurdle to show how good he was. At the time, he was described as having “a touch of class about him” so it was by no means clear to racing analysts how far he would go but Altior was the favourite for the race and used his big frame to justify the support he got in the betting.

Nicky Henderson’s superstar really showed what he was all about when he won the Supreme Novices’ Hurdle itself at the Cheltenham Festival. Completing the double in both races is a very rare feat indeed which proved to be too much even for the likes of Cue Card and Dodging Bullets.

The main reason for that are that the calibre of competition is obviously higher at the Cheltenham Festival whilst this is a race usually won by four or five-year-olds who are still developing and learning the ropes so have a tendency towards unpredictability.

One thing that Altior had in common with the vast majority of race winners is that he was right at the top of the betting. This is not a race in which it pays to back long shots as those outside of the top three in the bookies’ markets have a poor race. It’s also important for punters to lend their support to horses who have already had a few runs and ideally a win or two over hurdles.