Ordinarily the third and final of the Group 1’s on the opening day at Royal Ascot, this race has moved to Saturday for 2020, sandwiched between the Coronation Stakes and the Diamond Jubilee Stakes. The St James’s Palace Stakes is one of the most famous races of the whole meeting, as the classic generation of colts lock horns over the Guineas distance of one mile.

The St James’ Palace Stakes was one of the races picked up by Frankel during his illustrious career, the roll of honour here reads like a who’s who of the greatest milers in the history of the sport including Rock Of Gibraltar, Giant’s Causeway and Brigadier Gerard.

1m is the trip for this Group 1 contest on Day 5 at Royal Ascot, with the race offering a very handsome £250,000 in guaranteed prize money in 2020. The ground at the track is currently described as soft, but may firm up just a little come race day.

Being a one-mile contest restricted to three year old colts, it is no surprise that this event regularly attracts runners from the 2000 Guineas. Brilliant horses such as Frankel, Dawn Approach, Gleneagles and Galileo Gold have all backed up their Guineas victories with a win in this race over the past decade. We don’t have the Guineas winner in this year’s field, but we do have the second and third placed finishers from Newmarket and they will certainly be of interest to punters here.

No prizes for guessing that it is Aidan O’Brien who holds the record for the most wins amongst trainers in this race. Having registered an eighth success with Circus Maximus 12 months ago, O’Brien sends three into battle this time around, as he looks to extend his lead at the top and claim win number nine.

This has been a solid contest for favourite backers in terms of strike rate, with six of the past 10 jollies coming home in front. There have been a few pretty short priced winners amongst that sextet, but supporters of the market leader will still have squeezed out a level stakes profit of a shade under two points over this period.

The likes of Threat, Positive and Arizona all bring solid juvenile form to the table this year, whilst Palace Pier is the horse who retains the most untapped potential. Overall though, those runners do still lie some way behind the second and third placed finishers from Newmarket from a ratings perspective. The favourite was beaten that day but Pinatubo is a worthy favourite once again and might just go a little better here.

To say that this Charlie Appleby-trained son of Shamardal was impressive in his juvenile campaign is something of an understatement. In winning all six starts at two, including two at the highest level, this compact performer achieved a rating of 128. That is a figure almost unheard of for a two year old, and even higher than that gained by the mighty Frankel during his first season.

Having been so spectacular during his debut campaign, with a nine length demolition of the field in the National Stakes at the Curragh in particular standing out as a monstrous performance, the question on everyone’s lips ahead of the current season was, would the colt maintain the same level of dominance at three, or would his rivals catch up physically?

Fast forward to this season’s 2000 Guineas and confidence behind Pinatubo remained high, with the colt being made an odds-on shot for the opening colts’ Classic of the season. Looming into contention over a furlong from home that day, he did hit the front briefly, only to be overhauled by both Wichita and Kameko on the run to the line.

He was still only beaten 1¼l, so was hardly disgraced, but fans will be hoping to see him back in the winner’s enclosure here. Was he not quite at his peak first time out? Did the one-mile trip find him out? Or have his rivals simply caught up with him this year? We will likely find out here but it is hard to suggest 15/8 isn’t at least fair.

One place and one length ahead of Pinatubo at Newmarket was the Aidan O’Brien-trained, Wichita. Also fairly impressive during his juvenile campaign, this son of No Nay Never was a seven length winner of the Group 3 Tattersalls Stakes at Newmarket, before being unable to live with Pinatubo in the Dewhurst Stakes at that same track on his final start of the season. Having finished close to five lengths adrift of Pinatubo in that race, the fact that Wichita was able to turn the tables in the 2000 Guineas is a strong argument that Pinatubo may not have developed as much physically as some of his rivals over the winter.

That Guineas performance from Wichita certainly doesn’t seem to have come as a surprise to connections. Coming in for heavy support in the market that day, a big run looked a strong possibility, and the colt certainly delivered, looking the likely winner inside the final half furlong, only to be mugged by Kameko coming down the outside to score by a neck.

That effort does represent the best three year old form achieved by any of the runners in this field – albeit only narrowly over Pinatubo – and also appeared to confirm that this speedily bred runner has the requisite stamina for this trip. He looks likely to go close under Ryan Moore.

About the St James’s Palace Stakes 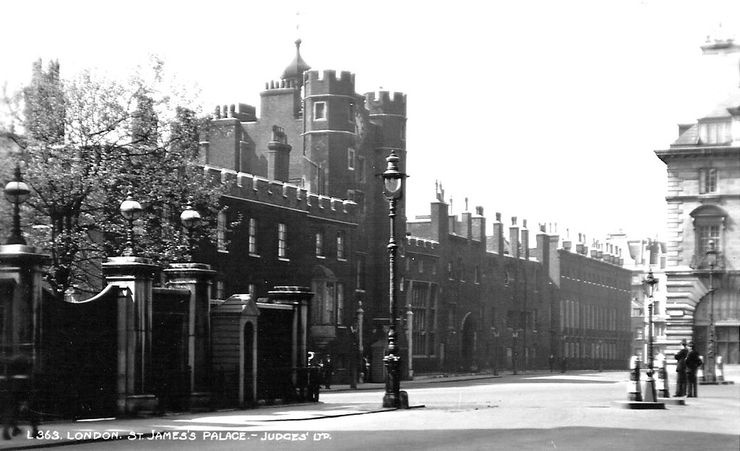 Colts have no shortage of top class races to choose from when they turn three years old. Not only can they compete in races such as the 2,000 Guineas and Poule d’Essai des Poulains but they enjoy exclusive access to the St James’s Palace Stakes, run during the opening day of Royal Ascot. For the horse first over the line during this prestigious Group 1 contest, they will bag their connections over £300k in prize money though this will be £148,000 in 2020.

It won’t be too long before the one mile race celebrates its 200th birthday. Introduced in 1834, the St James’s Palace Stakes, named after a royal residence during the Tudor period, is an event with a deeply rich history. It began on a less than impressive footing however with the first ever edition of the race a walkover, won by Plenipotentiary. He certainly wasn’t an unworthy champion however as the Derby winner was one of the best British horses of his era.

Both the 2,000 Guineas and the Irish equivalent take place earlier on in the flat season and many leading horses from them go on to featuring in the St James’s Palace Stakes. It’s really worth keeping your eye on the results of these two Classic events as several winners have often secured glory in this race too.

Sometimes strong performers in the Poule d’Essai des Poulains also make their way into the St James’s Palace although at the time of writing 2005 was the last time we had a double winner in the form of Shamardal when the race took place at York, Sendawar in 1999 the previous French 2000 Guineas winner victorious in this. 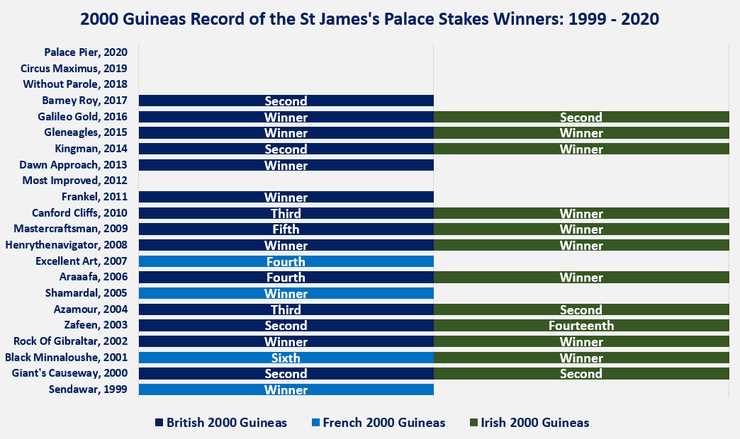 That said, of the three winners since 2018, none have competed in the British, French or Irish versions of the 2000 Guineas. Without Parole warmed up for his victory in 2018 by winning the Listed Heron Stakes at Sandown. Connections of Circus Maximus chose to compete in the Dee Stakes at Chester and the Epsom Derby. In a disrupted calendar in 2020, Palace Pier prepared for his win by easing to a three length Handicap win on the all-weather at Newcastle.

DON’T LOOK FAR DOWN THE BETTING

The bookies have done a pretty decent job of calling the winner of this race, certainly in more recent races. The favourite (or joint favourite) has won 12 of the last 21 renewals so it’s not been the most profitable of races for the bookmakers. 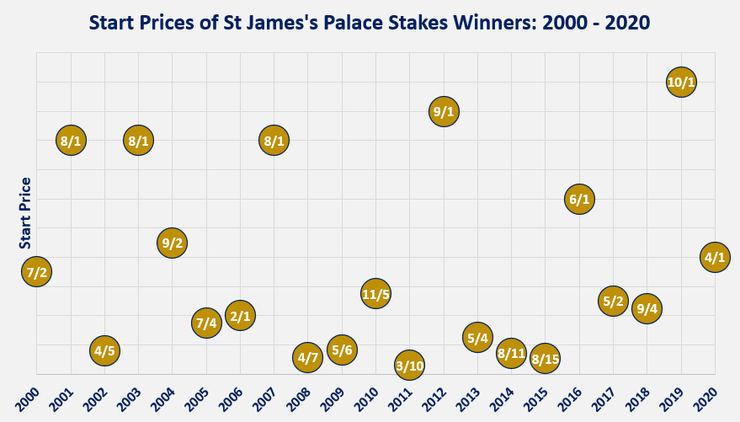 The only long-priced winners in the last decade came in 2012 and in 2019. When Circus Maximus won in 2019, it was on the back of a sixth placed finish in the Epsom Derby. When Most Improved (slightly unexpectedly) bounced back from a poor display at Chantilly in 2012, he did so during a particularly well-attended St James’s Palace renewal, one that saw 16 horses competing for glory over one mile.

It’s hard enough for any trainer to win this race let alone with it on three consecutive occasions yet Aidan O’Brien has twice secured a hat-trick of victories. The County Wexford-born trainer saddled Giant’s Causeway, Black Minnaloushe and Rock Of Gibraltar to victory between 2000 and 2002 before doing the same again with Canford Cliffs, Henrythenavigator and Mastercraftsman between 2008 and 2010. He’s has added to these with victories in 2015 and 2019 with Gleneagles and Circus Maximus. 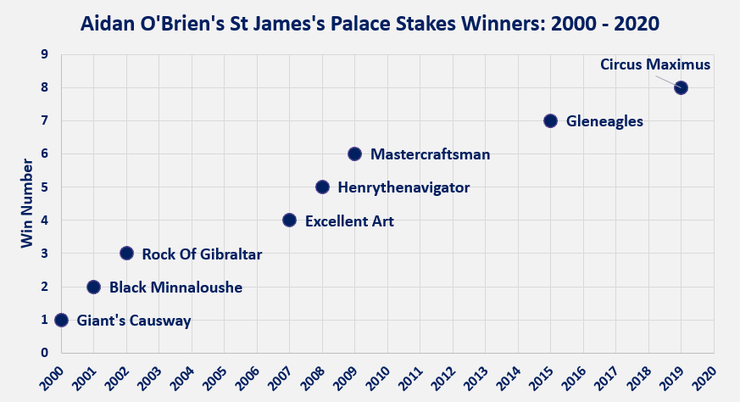 On all occasions the horses were at least part owned by Sue Magnier and husband John Magnier. It’s an especially impressive achievement knowing that no other trainer since the start of the 20th century has managed three consecutive wins in this race.

The only time Frankel experienced a real scare in a Class 1 race was during the 2011 edition of the St James’s Palace Stakes. The once highest rated racehorse in the world approached his first Royal Ascot unbeaten in six starts was trading at a short 1/3 price to secure St James’s Palace success. Having been ridden hard by Tom Queally mid-race, the then three-year-old began to tire, allowing the chasing pack to close in. Aidan O’Brien’s Zoffany in particular was closing the gap at a rapid rate but the finish line came just in time to save the odds-on favourite, and spare the blushes of his jockey.