The first Saturday in October at Newmarket brings the last race in the British Champions Series before Ascot’s British Champion Day at the end of the month, and comes in the form of the Group 1 Sun Chariot Stakes.

First run in 1966, the race is named after the great racehorse Sun Chariot who won the Fillies’ Triple Crown of the 1000 Guineas, Oaks and St Leger Stakes in 1942 when all the Classics took place at Newmarket due to World War 2.

The mare Sahpresa won an historic hattrick of wins in the Sun Chariot Stakes between 2009 and 2011 for French trainer Rodolphe ‘Rod’ Collet. Sahpresa, along with Luca Cumani’s two-time winner Free Guest, are the only horses to win this more than once.

At this late stage of the season there are several races which aim to sort the very best horses from the different divisions. The Sun Chariot Stakes does that job for fillies and mares over a mile. Named after the winner of the 1942 Triple Crown, the Sun Chariot Stakes is a hugely prestigious and often ultra-competitive Group 1 race. None of the 12 fillies or mares in the field for the 2020 renewal came close to achieving the Triple Crown, but there are some really classy runners among them so we should be in for a cracking renewal.

The Sun Chariot Stakes is always a race to look out for as summer gives way to autumn and conditions get that bit more challenging underfoot. The unpredictability of the weather at this time of year adds a level of difficult for punters but there haven’t been many shocks at Newmarket in recent years. Last year’s winner, Billesdon Brook, was the longest priced winner in a decade at 16/1 but she is a 1,000 Guineas winner who was well used to competing at the top level before beating the likes of Veracious, Laurens and Hermosa.

Billesdon Brook was also right in the perfect age bracket as Esoterique and Sahpresa are the only horses older than four to have won any of the last 10 renewals. She was just about perfect in terms of the ratings and had the previous form on soft ground so often demanded by the race.

Johnny Murtagh was a highly respected and successful jockey. If the early stages of his training career are anything to go by he is going to be just as successful in his new venture. Among the success stories for Murtagh this season, the incredible improvement shown by Champers Elysees is a real highlight. She had an official rating of 86 at the start of the campaign and now, entering the final few weeks of the season, she is the red hot favourite for the Sun Chariot Stakes. It’s been a remarkable ride and there is no suggestion that it is going to end just yet.

The season began with a 14/1 win in a competitive handicap. Champers Elysees’ run was so good that day that a prospective buyer tried to work out a price with Fitzwilliam Racing. That deal eventually fell through, to the dismay of the interested party as she blew the field away in a Listed race at Galway next up. After a break from competitive action in August, Champers Elysees proved that Galway win was no fluke as she won her first Group 3 run stepping up to seven and a half furlongs. The Group 1 Matron Stakes at Leopardstown was next and although the field was very strong and they went at a tremendously fast gallop, she landed a gamble thanks to an awesome turn of pace which saw her come from last place to first.

That win was enough for Teruya Yoshida to stump up enough cash to buy Champers Elysees. He’ll be hoping that she can have plenty more success over the next year or so, starting with the Sun Chariot Stakes. Given how much she loves the soft ground it is certainly going to take a top class performance from any of her competitors to stop Champers Elysees claiming another Group 1.

Champers Elysees’ fellow Irish raider, Peaceful, ranks as her main danger. Aidan O’Brien’s filly finished one and a quarter lengths behind the favourite when they met last month in the Matron Stakes but that was her first race since early July and the feeling from connections was that she was blowing away the cobwebs ahead of what promises to be an exciting autumn.

There were many positives to take out of the Matron for all connected to Peaceful. For one, she took her record against Fancy Blue to 2-1 for the season. Fancy Blue is one of a number of top class horses that she got the better of in the Matron where she showed she can cope with a very strong gallop and is absolutely a Group 1 horse. It’s also well worth noting that the ground at Leopardstown was firmer than ideal for Peaceful so her performance can be further upgraded.

With time running out in the season, Peaceful has only a handful of opportunities remaining to claim a Group 1 success. That makes the Sun Chariot Stakes all the more important and suggests that O’Brien has been targeting her at this race, hence the considerable break. With further improvement expected from the Matron, Peaceful is ready to serve up a real challenge to the favourite.

Peaceful is not the only fresh horse in the field with connections who believe their runner can challenge Champers Elysees. The five year old mare had her first outing of the season in August when she won the Listed Dick Hern Stakes as the 11/10 favourite. It was only the fact that she tends to need a warm up race to bring out the best of her that stopped her from being sent off at odds-on that day at Haydock but she had little trouble imposing her quality on the competition, always looking the best horse in the race.

Sir Michael Stoute was pleased with the decision to keep Veracious in training and with the wind surgery that she underwent in May. There should be more still to come from the 2019 winner of the Group 1 Falmouth Stakes (and the horse second in this race 12 months ago) so 7/1 looks a tasty price for those who want one on board from a little further down the betting.

About the Sun Chariot Stakes: Fillies Shine in October

Newmarket racecourse scores top marks for consistency when it comes to the provision of high-quality flat racing action over the course of the season, with the track staging at least one Group class contest every month between April and November.

October is something of a bumper month in this regard, with a clutch of Group 1 events being staged at the Suffolk venue – including this one-mile affair for the fillies. First run back in 1966, the race was initially restricted to three year olds, and held over the longer trip of 1m2f. The opening up of the race to the older fillies came relatively early in 1974, but it wasn’t until the year 2000 that the distance was cut to one mile. Just four years after that, the contest gained Group 1 status for the first time in 2004.

The Sun Chariot of the race’s title refers to one of the greatest fillies ever to have graced the Rowley Mile. A winner of eight of her nine career starts, the King George VI-owned Sun Chariot bagged top spot in the 1,000 Guineas, the Oaks and the St Leger in 1942, becoming just the seventh filly to land the Triple Crown. Due to the war, all three of those Classics were staged at Newmarket in 1942, so it is only fitting that it is here at the headquarters of the flat racing game that she has a race named in her honour.

In common with other events of its type, the three year olds receive a three pound weight allowance from their older rivals in this race, and a look at the history of previous winners would suggest that that seemingly small allowance has proven to be a significant advantage.

Since the race was first opened to the older fillies in 1974, the three year olds have come home in front over three quarters of the time. Even accounting for the fact that they tend to be the most strongly represented age group in the race, that is still a pretty formidable record. 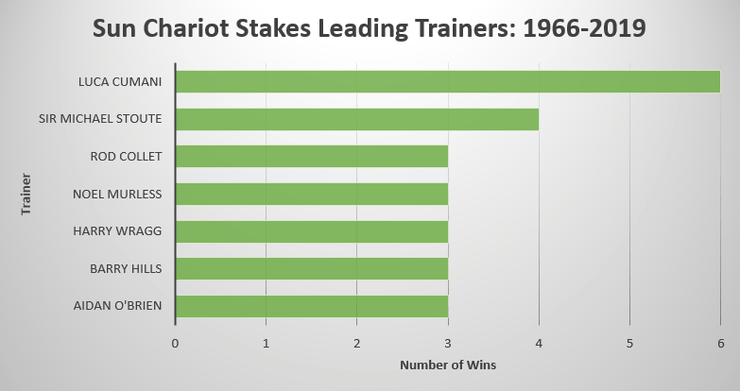 The now retired Luca Cumani was a trainer who tasted his fair share of success with his fillies during his career overall, but nowhere more so than in this contest. Cumani’s total of six wins is good enough for the all-time lead as of 2019, but with big guns Sir Michael Stoute and Aiden O’Brien featuring prominently amongst the chasing pack, it wouldn’t be the biggest surprise to see him joined at the head of affairs in the not too distant future.

The name of French trainer Rod Collet features in our top trainers table thanks to the exploits of just the one horse. The remarkable Sahpresa ran in 12 Group 1 contests over the course of her career – being beaten on nine occasions and winning three times. She certainly seemed to like it here at Newmarket though, with all three of those top-level triumphs coming in this very race. Successful here in 2009, 2010 and 2011, as of 2019 she remains both the only three-time winner, and the only six year old to ever come home in front.