And they’re off! There’s no mistaking the moment the Cheltenham Festival gets underway as the famed Cheltenham roar greets the start of this, the Supreme Novices’ Hurdle. But, who will be cheering loudest at the end of this full throttle hurdle contest?

This was first run as the Gloucestershire in 1946 when it was made up of three separate divisional races. This changed to two for every year except for 1963, becoming a single race in 1972.

The Supreme Novices’ Hurdle has been a springboard for some great National Hunt racehorses including 1968 winner L’Escargot, 1970 winner Bula, 2004 winner Brave Inca and 2016 winner Altior.

About the Supreme Novices’ Hurdle: The Traditional Curtain Raiser

The Cheltenham Festival is the biggest National Hunt meeting of the year. The four days of action attract thousands of racegoers to the Gloucestershire venue and many millions of punters to have a bet on at least one of the Grade 1 races taking place. Racing fans know that Cheltenham takes up much more than just four days though. The build up for the Festival always goes on for months before the world famous ‘Cheltenham Roar’ greets the start of the first race, the Supreme Novices’ Hurdle.

That roar signals the excitement that’s been building for the Festival as a whole but also for this brilliant Grade 1 contest itself. As the name suggests, it’s a hurdle race which is open only to novices (that is to say horses who had not won a hurdle race before the start of the current season) and these must be horses who are aged four or older. It takes place over 2 miles and half a furlong, with eight hurdles to be navigated.

The race was first run as the Gloucestershire Hurdle in 1946. It was known by that title until 1974 when it was registered as the Lloyd Bank Champion Novices’ Hurdle and has subsequently been sponsored by several different companies. 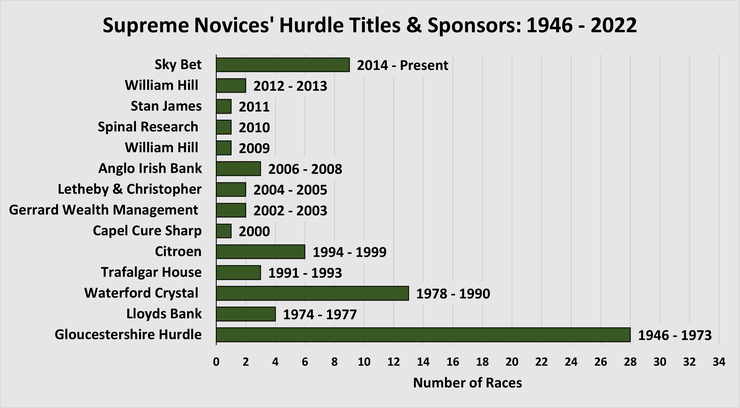 The name may have changed over the years but the importance of the Supreme Novices’ Hurdle has remained fairly steady. It’s now used by leading trainers as a vital step in the careers of some of their very best horses whilst in the early days it was such a highly regarded race that it used to be split into multiple divisions. It’s been held as just the one race since the 1970s so it is no surprise that it is such a competitive contest.

Punters looking for a guide to the Supreme Novices’ Hurdle have many different races to consider in the lead up. In addition to the official trials such as the Supreme Trial at the November Meeting, the Grade 1 Tolworth Novices’ Hurdle at Sandown is worth considering as it provided the 2022 winner and the first and second at the 2018 Cheltenham Festival. Irish horses will often head to Cheltenham via the Moscow Flyer Hurdle, a Grade 2 contest at Punchestown named after the dual Queen Mother Champion Chase winner.

Just as there are numerous different routes to the race, those who run well have a plethora of options ahead of them with some going on to have more success over hurdles and others, such as the aforementioned Moscow Flyer, moving into chasing. The one thing most winners have in common is more success at Cheltenham, so it’s well worth making a note of the Supreme Novices’ Hurdle result.

As the horses competing are hopefully just at the start of their National Hunt careers and therefore have scope for fast improvement, the Supreme Novices’ Hurdle can be a somewhat tricky race to predict. 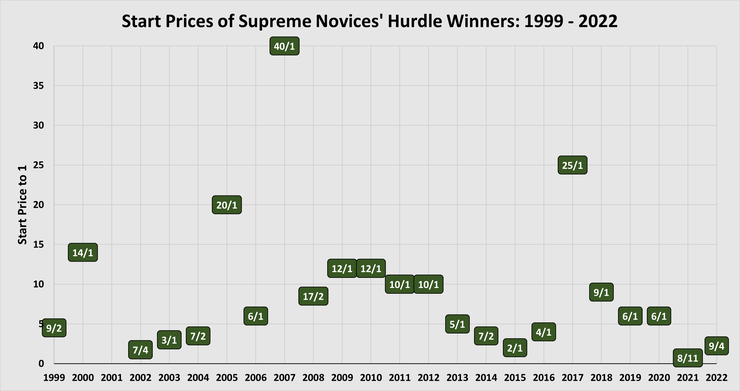 Winning favourites are relatively rare and have been interspersed with longer odds winners, some of whom have gone on to be massive stars such as 2016 winner, Altior.