Sandown Park starts the new year of racing in style with a great card headlined by this Grade 1, the Tolworth Novices’ Hurdle. First run in 1976, this two mile hurdle sees some of the most talented horses over the smaller obstacles compete at the Surrey track.

This race was won in 1984 by Desert Orchid, prior to his switch to chasing. Summerville Boy was the latest horse to win here before Cheltenham glory, adding the Supreme Novices’ Hurdle to his Tolworth crown in 2018.

One of the first big Grade 1 contests of the New Year comes in this two mile Novices’ Hurdle from Sandown Park. Set to be run on heavy ground this year, the race offers £35,000 in total prize money and annually attracts a relatively high class field.

Note: The following tips are from 2021. Tips for the next renewal will be added once the final declarations have been made.

Big guns Nicky Henderson, Paul Nicholls and Colin Tizzard have 12 wins in this race between them, but surprisingly none of that trio have an entry this time around. Of the trainers who are on show, only Oliver Sherwood boasts a previous win in the race courtesy of the success of Change the Act way back in 1991. Sherwood will be represented by outsider Grandeur D’Ame in 2021.

Unsurprisingly, considering this is an event for the up and coming hurdlers in the game, it is youth which has been favoured in this race of late, with eight of the past 10 editions falling to a runner aged six or younger. Do Your Job, Shakem Up’Arry and Tile Tapper are the three seven year olds attempting to defy that trend this year.

The favourites have a solid 50% strike rate in this event over the past 10 years. With two 4/9 shots included in that number though, supporters of the market leader would still have registered a loss of £0.26 to £1 level stakes over this period.

We have a couple of unbeaten hurdlers in this year’s field, including the horse who currently heads the betting in most lists, the Harry Fry-trained Metier. Formerly based at the Andrew Slattery yard in Ireland, this five year old by Mastercraftsman, showed a decent level of form without pulling up any trees in winning just one of eight starts on the level, and also doesn’t seem to have been the easiest of horses to train. Gelded in November 2019, he then made the switch to his current yard in January before being sent for a wind operation in July of this year.

Considering all that upheaval, it perhaps wasn’t surprising that the horse didn’t make his debut for his new yard until October of this year. What may have taken connections by surprise slightly though is just how good Metier has been in his two hurdles starts to date. Sauntering 10 lengths clear in his Newton Abbot debut, he was then equally as impressive when scoring by five and a half lengths in a Class 2 event at Ascot in November. This is clearly a big step up in class, but he appeared far from fully extended in either of those wins, whilst the fact that he is also proven on soft and heavy going is a big factor in his favour.

Another for the shortlist is the only mare in this year’s line-up: the Jane Williams-trained daughter of Saddler Maker, Galice Macalo. Despite the fact that she will only just have turned five the day before this race, the mount of Chester Williams has more experience than a few of these and will be making her seventh start over obstacles here. That experience is a plus, and significantly she also seems to be improving with almost every run.

Zero from three headed into the current campaign, she put that right at the first time of asking when really toughing it out to score in a good ground event at Warwick, before then showing the benefit of that run to saunter to an 11-length success in a Class 3 event at Stratford. Her hat-trick attempt then saw her sights raised for a Listed event at this track at the beginning of December. She looked like landing the hat-trick too when jumping to the lead over the final flight, only to be mown down close home by the fast-finishing Benson. With seven and a half lengths back to the third that still rated a solid effort though. And in receipt of seven pounds from the entire field here courtesy of the mares’ allowance, she likely won’t be too far away.

The second of the two unbeaten hurdlers in this year’s line up is the Tom Lacey-trained Adrimel. An eight length winner of his sole point to point over three miles in March 2019, this one enjoyed an excellent start to life under rules last season in winning his debut bumper by 26 lengths. Following up in a similar event at Doncaster, his ticket was stamped to have a crack at the Champion Bumper at the Cheltenham Festival. Only 16th of 23 that day, that Grade 1 event was possibly a step too far at that stage of his career, although the fact that he has since undergone a wind procedure suggests that all may not have been well on the day.

Fast forward to the current campaign and it was at this very track that the horse made his hurdles debut. And it was a fairly impressive debut too, as Admirel’s stamina reserves kicked in close home for a three and a half length success in that soft ground event. Stepped up to Class 2 level at Haydock last time out, he put in a very similar performance to slowly but surely grind it out in the heavy ground – this time coming home four and three quarter lengths to the good. Likely to be the biggest horse in this year’s field, Adrimel is far from flashy, and can even appear lazy in front. What he does do though is keep on finding when asked, which ought to serve him well in the likely gruelling conditions here. With Richard Johnson doing the driving, this one looks unlikely to go down without a fight.

*2014 race took place at Kempton in January after frost led to the cancellation of racing at Sandown.

About the Tolworth Novices’ Hurdle: Excellence In Esher

The National Hunt season is of course in full swing by the time December turns to January each year and, with the festive season now out of the way, the thoughts of many will no doubt be turning to the Cheltenham Festival in March. There are of course many top-level contests to be taken in before the greatest four days in the sport roll around – many of which can often prove influential to those showpiece events at Prestbury Park. One such race, particularly when it comes to the novice hurdling division, is this event which is held at the Esher venue of Sandown Park in early January.

Sandown is a track which certainly lends plenty of support to the inexperienced national hunt performers, with three of the five Grade 1 contests to take place at the track each season being novice affairs. This tops the bill when it comes to hurdling though, with the race being the only top-level event over the smaller obstacles to be held at the track.

First run back in 1976, and named in honour of the nearby town of Tolworth (whose only other claim to fame as far as we can see is that Eric Clapton attended school there), this is a Grade 1 event open to novice hurdlers aged four years old and above.

Invariably attracting a field of the most promising young chasers in training, the race is certainly well worth keeping an eye on with a view to the big races ahead. Summerville Boy (Supreme Novices’ Hurdle), French Holly (RSA Chase) and Yorkhill (Neptune Investment Management Novices’ Hurdle and JLT Chase) all went on to future Cheltenham Festival success having earlier displayed their potential in this race.

The greatest winner in the race’s history though is of course everyone’s favourite grey: the Gold Cup and four time King George winning superstar Desert Orchid, who took this in 1984.

Not Too Young, But Not Too Old 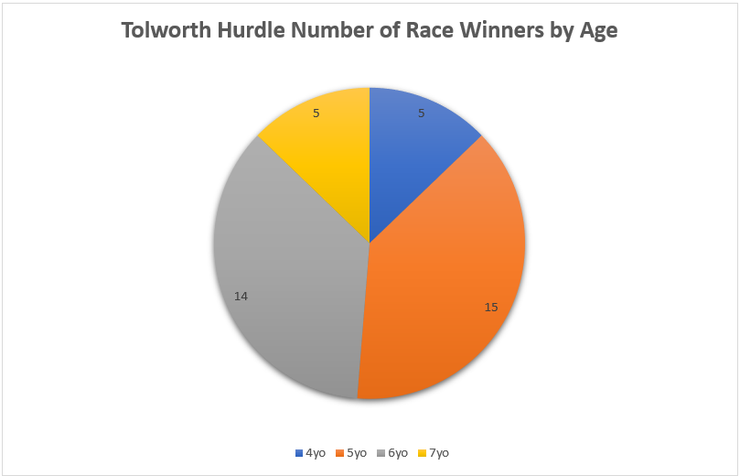 In common with many races of this type, the four year olds receive a weight allowance in this event – being required to carry 10st9lb, whilst those aged five and older are shouldered with 11st7lb.

Has this proven to be a winning advantage for the younger runners? The evidence in the above chart would suggest not, with the five and six year olds boasting a pretty dominant record. It should however be noted that the majority of the entries do tend to come from this five to six year old age bracket, so this trend is perhaps not quite so strong as it may appear at first glance. 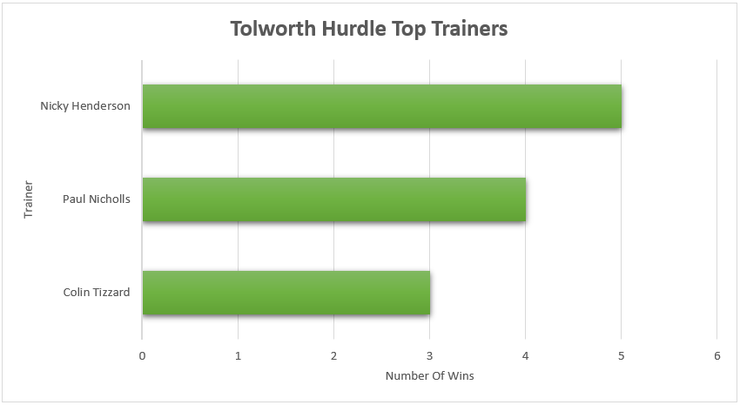 It may have been with us since back in the 1970’s, but the best records in this race – when it comes to training performance – have come since the turn of the century. Nicky Henderson, Paul Nicholls and Colin Tizzard are certainly no strangers to Grade 1 success – with the first two named in particular being involved in a seemingly annual head to head battle for the trainer’s title – and they have certainly made their presence felt in this race. It is Henderson who leads the way as of 2020 with five wins in all in this race.