The opening race of the Cheltenham Festival is the Supreme Novices’ Hurdle over 2 miles and ½ furlong. The Aintree equivalent comes here on day 2 in the form of the Top Novices’ Hurdle.

The race was first run in 1976 and became a Grade 1 contest in 2016. This was the last of the Aintree Festival’s Novice Hurdle to be promoted to the top tier, following the Sefton Novices’ Hurdle in 1995 and the Mersey Novices’ Hurdle in 2014.

About the Top Novices’ Hurdle

Spring is undoubtedly the best season of the year in which to be a National Hunt racing fan, with the two biggest festivals of the season taking place as the trees begin to blossom. Hot on the heels of the Cheltenham Festival in March comes the always excellent Aintree Grand National Meeting.

The three days of this festival certainly provide plenty of opportunities for the relatively inexperienced runners – be that over hurdles or fences – with seven of the 11 Grade 1 events (this meeting is second only to Cheltenham when it comes to the number of top level races) on offer being Novice contests.

Featuring amongst that number is this Novice Hurdle contest which takes play on the Friday of the meeting, the middle day. Held over a trip of 2m½f and having been classified as a Grade 1 event since the 2016 edition, this race – which is open to contenders aged four and older – regularly attracts runners last sighted strutting their stuff in the Supreme Novices’ Hurdle at the Cheltenham Festival.

Henderson Out In Front

Unsurprisingly for such a coveted contest, we have some pretty big names dominating the leading trainers table in the event up to and including the 2022 renewal. Perhaps there is none bigger than 15-time Champion Trainer, Martin Pipe but the great man has to settle for second when it comes to saddling the most winners in this race. It is Nicky Henderson – who has a “mere” six Champion Trainer titles to his name – who leads the way and could yet add to his six victories.

Successful in all spheres of the National Hunt game, Henderson does tend to excel with his Novice Hurdlers, although it did take him a while to make his presence felt in this race. First successful with General Miller in 2010, by 2016 he had reached top spot, having racked up an impressive five victories in the space of only seven years. He had to wait to add to this total but moved to six wins in 2022 with Jonbon.

When it comes to the age of the winner of this race, the 46 editions to have been run to date – once again up to and including the 2022 renewal – would suggest that it is the five year old contenders who hold the edge, with runners from that age bracket landing the prize over half of the time. 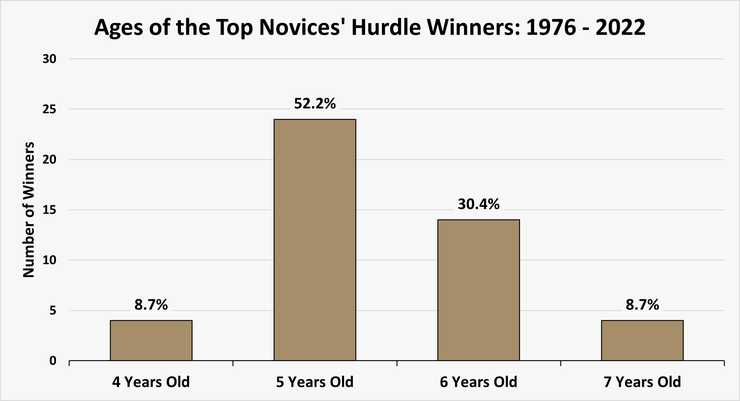 That statistic perhaps isn’t too surprising when we consider that the Grand National Meeting also offers an alternative target for the four year olds in the shape of the 4-Y-O Anniversary Hurdle, whilst seven years of age is relatively late for a runner to be making their presence felt in Novice Hurdle company. The discrepancy between the records of the five and six year olds may be worth bearing in mind though.

Buveur D’Air Best Of All

There have been a number of classy winners of this event over the years, including Granville Again (1991) who went on to claim top spot in the Champion Hurdle two years later. My Tent Or Yours (2013) meanwhile did everything but win that Cheltenham showpiece – filling the runners up spot on no fewer than three occasions.

The pick of the lot though is a horse that has dominated over the past few years and is Nicky Henderson’s Buveur D’Air. Getting on top late in the 2016 edition of this race, this JP McManus-owned runner went on to win each of his 10 subsequent starts, six of which came in Grade 1 company, including the Champion Hurdle in both 2017 and 2018.