There are three races that make use of the Grand National fences during the Aintree Festival and Friday’s ultra-competitive Topham Chase is one of them. It doesn’t require the same level of stamina as the Grand National itself, but a high standard of jumping is certainly the order of the day.

This race has been a regular feature at Aintree since 1949 and has been responsible for some hugely entertaining contests in this time. Although it is open to five year olds and older, you don’t tend to see too many winners at, or close to the minimum age. Since 1999 there have only been five Topham Chase champions aged seven or younger.

About the Topham Chase

The Topham chase is a National Hunt Steeplechase which is run at the Aintree Racecourse at its annual meeting in early April of each year and is one of the ‘best of the rest’ at the meeting which features the biggest race of them all. The horse racing extravaganza plays host to the Grand National that same weekend, and the Topham Chase is one of the three contests to use the Grand National fences. The other being the amateur outing known as the Foxhunters’ Chase.

This highly rated race has been an annual feature at the Grand National meeting since 1949, and draws with it the very best in horses, jockeys and trainers alike. From the years of 1989 to 2001 there was a name change applied to the steeplechase in order to honour the late course clerk John Hughes, before reverting back to its current title.

A History of Winners

Throughout the years this highly contested race has produced some formidable winners. Though due to the highly competitive field only a handful of horses have claimed first place more than once. Culworth in 1950 and 1951, Roughan in 1957 and 1958 then Ultragold in 2017 and 2018. However, it was in 2012 that the record was set by Always Waining by winning the race for the third time in a row.

The challenging run has seen many of the greatest from the world of National Hunt racing grace the track. From the jockey side of the contest there is no shortage of world class talent among the winners, though only two of them have managed to win the occasion three times. Those jockeys are none other than Richard Dunwoody (from 1986 to 1992) and Barry Geraghty, who managed three wins in only four years from 2013 to 2016. Geraghty is no longer in the saddle these days and was unable to find that one more win that would have edged him ahead.

Similar to the jockeys who have secured the honours at the Topham Chase, the trainers list of winners is just as impressive, if not more so. The world-beating Nicky Henderson currently has the joint most wins with a record five successful rides. Henderson shot his way up the wins table with three in a row from 2013 to 2015 and did so, rather impressively, with three different horses. He was joined on five wins in 2022 by Sean Bowen who had a hattrick of wins with Always Waining. They are one ahead of Mr W Hall, and two clear of Willie Mullins.

Having looked at the previous results dating back to 1949 we are able to see a certain trend, as shown by the chart below. 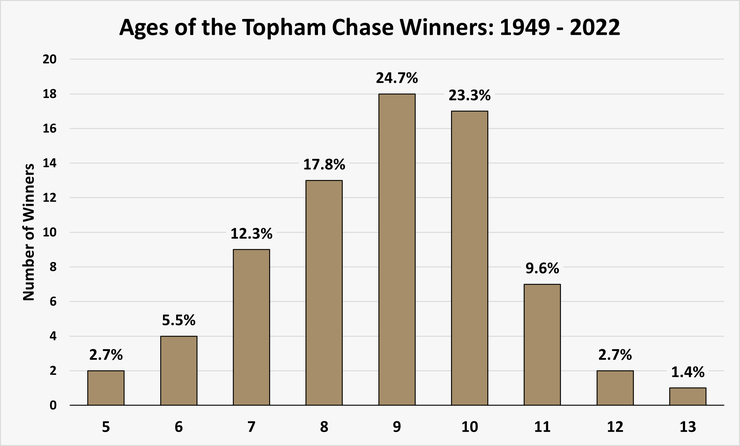 It is quite clear that over the nine different age groups that have been successful, it is the ages of eight to 10 years old which have seen the majority of the success. These age groups have been winners over 65% of the time, with 9 and 10 year olds alone having won over 53% of the races since 1990.