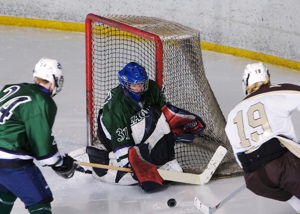 Ice hockey is hugely popular in North America and many European countries and is growing in popularity in the UK. Whilst the National Hockey League (NHL), that incorporates teams from the US and Canada, is by far the most glamorous, richest league in the world, and also the most popular to bet on, there are a host of other leagues and also international competitions on which to bet.

This means there is usually some hockey somewhere for fans to get their teeth into and with fast-paced end-to-end action making it great to watch and also fun to place a casual bet on.

How To Bet On Ice Hockey

Ice hockey, like many predominantly US sports has quite a wide range of betting options which can make it seem daunting at first. However, many of the different options are variations on the same bet but relating to each separate period, making it nice and simple for beginners to get to grips with. Here we list the main, simple options, rather than detailing all the variants of them.

There are various other bets available, for example which player will score first, will there be an even or odd number of goals in the match or a specified period, will the game go to overtime (effectively betting on the “draw”) and many more. Most of these are relatively self-explanatory, although by far the most popular bets are all detailed above.

There isn’t too much to look out for, other than whether a bet includes overtime or not. Generally speaking most bookmakers include it (and a shootout if needed) on most bets, unless otherwise stated. Most bets will be voided in the event of a game being postponed or abandoned prior to the 55th minute. Finally, where betting on handicap bets or goals bets, if the result is a tie (where the points/goals have not been expressed as a half goal) the bet will usually be a push (you get your stake back).

As ever, the key to potentially making a net win from betting on ice hockey is research, study, and a little more research. By doing this, you can seek to find value bets, which is a good way to try to get an overall net win in the long run. When betting on ice hockey the most important factor is to study the recent form of the teams and be aware of which players will be playing. With the reliance, like most US sports, on the handicap (spread) by assessing the relative merits of both teams and assigning them your own handicap it is easy to see where you disagree with a bookie and thus where, if you’ve done your handicapping well, there is value.

One interesting factor that bettors should be aware of is changing trends. 2013 has thrown up some fantastic value (in the NHL) due to changing home ice advantage in the playoffs. In recent seasons it has been greatly reduced due to a number of factors meaning that the bookies were running scared of the away side. However, this latest season has seen normal service being resumed, in fact home ice has been more important than for a long, long time, meaning backing the home side has offered some fantastic value to the shrewd punters who spotted the trend early.

The International Ice Hockey Federation (IIHF) is the highest governing body for ice hockey and in-line hockey in the world and is based in Zurich, Switzerland. Which is a little odd when you consider that most of the higher level games are played over in North America. The National Hockey League (NHL) is the most popular hockey organisation, with 31 teams participating (24 in the United States of America and seven in Canada), run annually since 1917.

Ice Hockey is a very popular sport in the US and Canada, with the NHL in particular viewed worldwide on international television. The NHL draws the world’s best players, with players from around 20 countries currently participating in the league.

Whilst the NHL is far and away the biggest league globally, the sport has a huge following in many European countries. In places such as Finland, Sweden and Russia, domestic hockey is big business, widely supported and often wagered on.

The NHL season usually runs from October to June each year, with 82 matches played over the course of the season. As of 2017, the number of teams in the NHL rose to 31, with Vegas Golden Knights joining, competing in the Pacific Division of the Western Conference.

The Stanley Cup Play-Offs is an elimination tournament in the NHL. Eight teams from the two conferences qualify for the play-offs based on regular season total points. Although the play-off system has changed over the years, the NHL has always used a play-off tournament to determine the eventual winners.

The winners then face off in the Stanley Cup final, which is the final game of the season. As of 2017, the Pittsburgh Penguins have won the last two Stanley Cups, beating San Jose Sharks in 2016, and Nashville Predators in 2017. The Stanley Cup itself is one of the biggest trophies in world sport, standing almost 90cm high and weighing a hefty 16KG!

As of 2017, the IIHF World Championship is split into four divisions, with a promotion and relegation scenario. The Championship Division comprises the top 16 nations in the world, with the likes of Canada, Germany, Italy, Switzerland and United States all competing. Then there’s Division I, Division II and Division III.

Sweden were the 2017 Top Division champions, winning seven of their 10 2017 IIHF World Championship matches. The winners of this tier can truly claim to be the “world champions”. Canada are the most successful nation overall, with 26 wins, although Russia including the former Soviet Union have won the World Championship 27 times. In the 10 years up to and including 2017 we have seen the glory shared relatively evenly, with Russia triumphing on four occasions, Sweden and Canada twice and Finland and the Czech Republic winning once each.