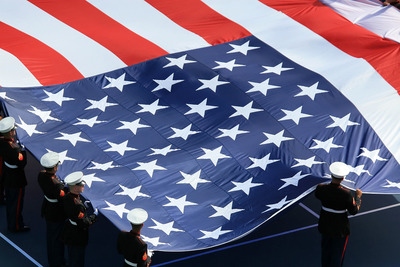 The US Open is one the four major tournaments in tennis, known as Grand Slams. As a result, it makes it one of the pinnacles of the sport. The competition has been running since 1881 and with it comes a prize pool of over $60 million, making it the most valuable of the four Slams and one of the most lucrative sporting events on the planet.

The tournament lasts for two weeks and is played in the Billie Jean King National Tennis Centre in New York, United States. The US Open is normally the final Grand Slam of the year, coming after the Australian Open, French Open and Wimbledon.

The men’s and the women’s game is the biggest attraction at the US Open, with each hosting 128 players in total. Each round is plated as a knockout format, with the winner progressing to the next stage.

Of the 128 players in each draw, there are 32 seeds that are ranked based on WTA and ATP points, respectively. If a player within these seeds is unable to play for whatever reason, then the next highest ranked player will take their place. For example, in 2017, 2nd seed Andy Murray withdrew prior to the tournament starting, which meant that 33 seed Philipp Kohlschreiber took is spot as the final seed.

Along with the seeds, there are also 16 qualifying spots that can be obtained by winning any of the qualifying tournaments that are hosted throughout the year. Players who often have a very low world ranking see this as an opportunity to gain entry. Along with these qualifiers are what are known as “lucky losers” who are players that have lost in the final of the events. These are chosen by the committee of the US Open prior to the start of the tournament. 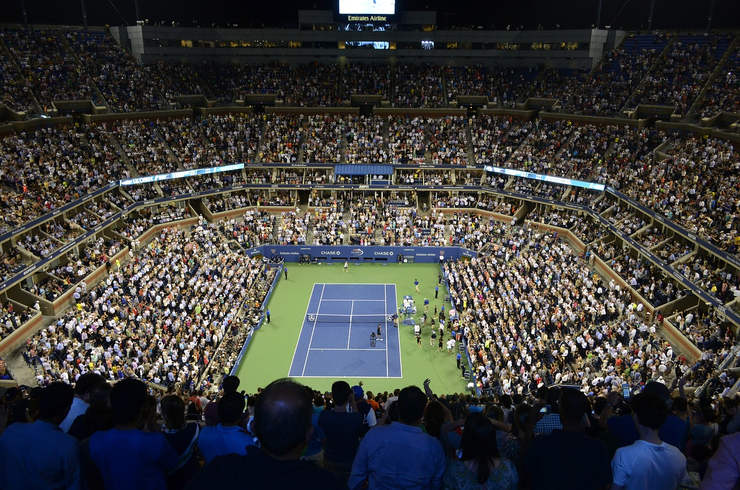 The courts that are played on throughout the US Open are hard courts. Since 2020, the hard courts at the tournament are made up of a Laykold surface, which is a certain type of court. This change was introduced to increase the speed the court played at whilst also reducing potential injuries which stemmed from the hardness of the previous surface.

Between 1978 and 2019 a Pro Deco Turf hard court surface was used meaning the court played on the slower side to most hard courts, designed this way in order to be able to function at consistent pace throughout the event considering despite the extreme heat that can be apparent. This court produced a little less friction, meaning the bounce is a little lower than you usually might find.

The courts are painted blue in colour, with a green outline, mainly to make it easier on the eye for viewers on TV and within the arena.

The Billie Jean King Tennis Centre is pretty substantial, especially considering it’s location within New York. The area includes 22 courts in total, with 4 of those considered as show courts, meaning that they have substantial seating areas for fans. The show courts are named the Arthur Ashe, Louis Armstrong, Grandstand and Court 17.

The Arthur Ashe is the biggest of the four courts, with a seating capacity of 23,771, making it one of the biggest tennis courts in the world. It first opened in 1997 and seen significant expansion and improvement since then, most notably a roof being added.

The Louis Armstrong court is next largest with a capacity of 10,200, although this was reduced from its original amount 18,000 due to the opening of the Arthur Ashe. The Grandstand seats 6,000 and Court 17, the newest of the 4 courts, holds 3,000 and is sunk into the ground, gaining the nickname, “the pit”. 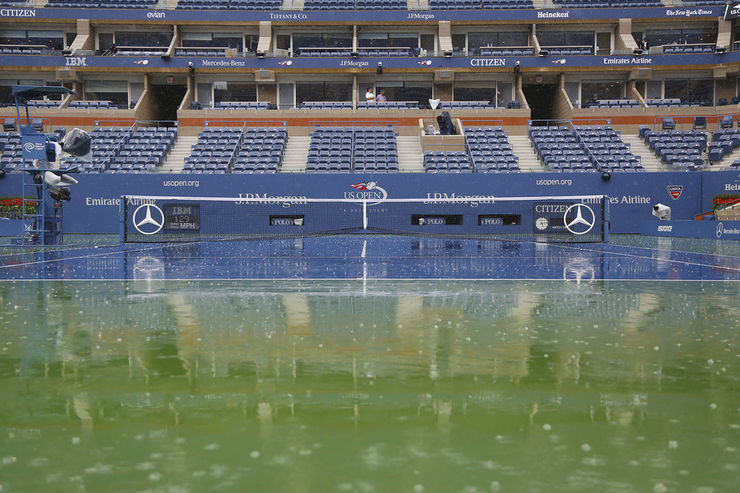 The heat at the US Open is often the thing that the players have to work hardest again. It’s not uncommon for temperatures on court to reach upwards of 40C. But, the tournament is also susceptible to rain, with each tournament from 2007 through to 2012 seeing postponements, meaning that the finals were then played on a Monday due to lost time.

Whilst many players are used to the heat and often train in hot climates, the toll it takes on the body, especially in later rounds often means that it can be a huge factor and often affects performances.

In total there is just over $60.1 million on offer for the US Open (2022). The prize money available means that it’s the richest tournament of the year, and by a fair distance. Although exchange rates do come into factor when deciding this, but even then, it’s still a healthy amount over the other 3 Grand Slams.

Prize money is split evenly between the men’s and women’s games. The prize money for each round continues to rise the further you get, with the winners picking up cheques for $2.6 million in the latest tournament, also the most of any of the four majors.

In the last few years, the men’s game has seen a real mix of players step up to win the US Open. Carlos Alcaraz, Daniil Medvedev, Dominic Thiem, Rafael Nadal and Novak Djokovic are the last five winners. But, what you often find, before this streak, is that one or two players have dominated.

Roger Federer has been the driving force in the modern-day history, winning five times in a row from 2004 to 2008. Other notable winners have been Pete Sampras, Andy Murray, Ivan Lendl, Jimmy Connors and John McEnroe.

In the Open era, there are 3 players that are tied for most men’s titles. They are Jimmy Connors, Pete Sampras and Roger Federer, each winning five titles each.

But, whilst the US have previously had strong showings at the US Open, there hasn’t been an American male winner of the event since Andy Roddick in 2003. This is probably one of the reasons why numbers are down in terms of visitors from the early 2000 period.

The Women’s game follows a similar pattern to the men’s. Serena Williams has been the best the game has seen for many a year and has won six times in total, with three of those victories coming between 2012 to 2014. But, five out of the last eight winners were seeded outside of the top ten or unseeded and considered to be relative outsiders coming into the tournament. Flavia Pennetta in 2015 was seeded 25, Sloane Stephens was unseeded in 2017, Naomi Osaka was seeded 20 in 2018 and Bianca Andreescu was the 15th seed in 2019. The 2021 Champion, Emma Raducanuc, was not only unseeded but had to come through qualifying to enter the main tournament. This was the first time a qualifier has won any of the four Grand Slams.

The exceptions to this trend in recent years wereIga Swiatek in 2022 who was the top seed, Naomi Osaka in 2020 and Angelique Kerber in 2016 were both second seeds. Before Swiatek in 2022, the last number 1 seeded winner was Serena Williams in 2014.

It’s Chris Evert and Serena Williams that are tied at the top of the most single titles ever, with six each. Evert dominated through the seventies and early eighties, whilst Williams’ form came in the late nineties, through to the mid 2010s. 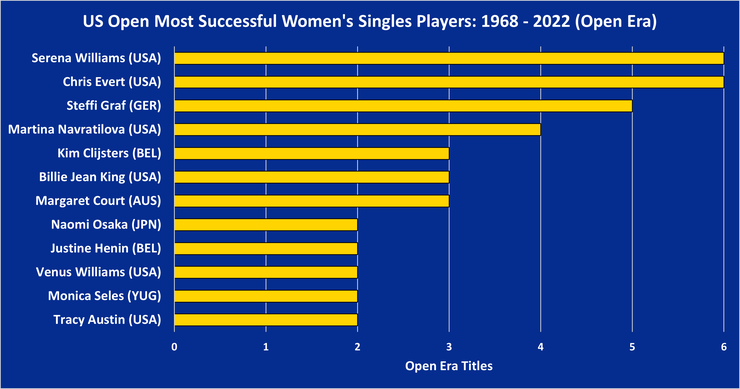 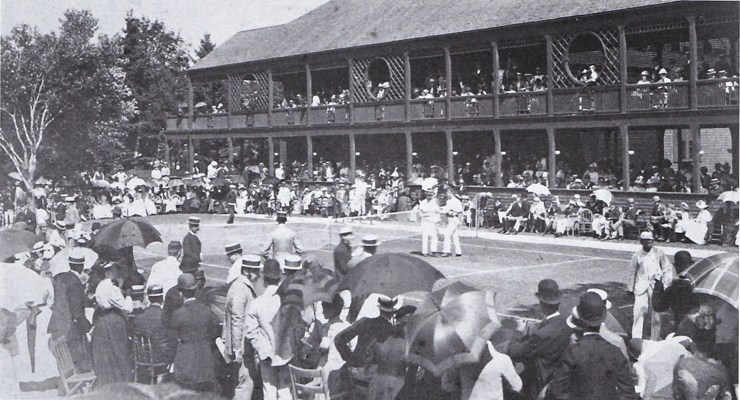 The first US Open was actually held on grass courts at the Newport Casino in Rhode Island. The tournament was pretty much an instant hit and each year they were finding they were oversubscribed with players for the next event.

It was for this reason why, in 1911, a host of players, led by that of Karl Behr, proposed the move into New York City, where they would be able to accommodate more players and more fans. The first few years the tournament was men only, and it wasn’t until 1887 when the women finally got their own version of the US Open set up, located out of the Philadelphia Cricket Club.

By 1915, traction was building to make the move into New York City and with it they managed to get 100 signatures of players who all agreed that the move made sense. But, there was still a good number of people opposing the move, including 8 former singles champions. However, a vote was called in 1915, with a decision of 128 votes in favour of the move and 119 against.

The tournament was played out at Germantown Cricket Club, before moving to Forrest Hills following expansion to 14,000 seat concrete stadium.

The Open era started in 1968, when all 5 tournaments were merged into what we now recognise as the US Open. The tournament was open to professionals for the first time, with 96 men and 63 women competing.

By 1975 the tournament was switched from grass to clay, mainly because of the cost to maintain the grass in the extreme New York climate. But, the move from Forrest Hills to Flushing Meadows, its current home, saw another surface change from the clay to the hard courts that we see today. 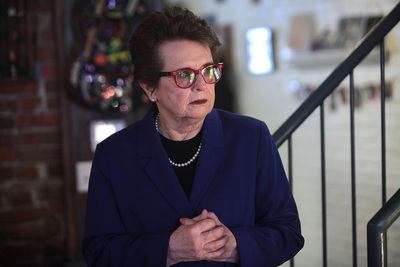 Billie Jean King is probably the most iconic women in the history of female tennis. Not only did she win twelve major singles titles, with four US Opens, plus sixteen doubles majors and eleven mixed doubles titles, but she was also the driving force behind the equality when it came to distribution of prize money.

In fact, whilst the titles were amazing and she will go down as one of the all-time greats on the court, her push for equal pay in tennis and gender equality is arguably her greatest victory. She was able to start her campaign at the peak of her career in 1971 and by 1973 the US Open was the first of the four majors to offer equal pay for both men and women tennis players.

Her efforts both on and off the courts deemed appropriate for the USTA to name the New York stadium after her in a fitting tribute. 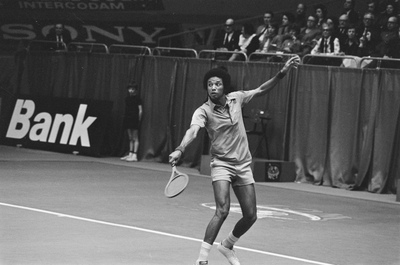 Arthur Ashe was a pretty remarkable tennis player in his own right, winning the US Open, French Open and Wimbledon. In fact, he still remains to this day the only black player to do so, which is a pretty staggering feat. He was also the first black player to be selected for the United States Davis Cup team for which he won on four occasions.

Ashe sadly passed away in 1993, aged just 49 from AIDS related pneumonia. But, his legacy still lives on at the US Open, with the main stadium being named after him in his honour for work he did both within tennis and outside of the game after his retirement, mainly in educating people about AIDS and HIV.