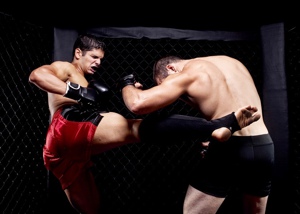 UFC (Ultimate Fighting Championship) is the most prestigious league/organisation in the world of Mixed Martial Arts (MMA) and has seen huge growth in recent years. The UFC was created in America in 1993 after developing from Brazil’s full contact Vale Tudo and had minimal rules. Fighters soon learned that to win they needed to excel in a number of different fighting disciplines and so the concept of MMA was born.

The concept of two hulking physical specimens standing toe-to-toe trying to knock each other out by almost any means is a brutal, thrilling spectacle. But hey, why not make it a little more excitement and adrenaline-packed? A cake has icing and sometimes even a cherry so let’s gamble!

How To Bet On UFC/MMA

As said, UFC is just one of the organisations that promotes and regulates MMA contests around the globe but from a betting perspective they are all fundamentally the same. By its nature there is relatively little to bet on and, whilst it is growing very, very quickly, it still remains small in comparison to many established sports. As such, and partly because it is still thought of slightly barbaric by some, the range of betting options is not as huge as you would get in many other sports.

There is very little to look out for when betting on the UFC or other MMA events. Generally all bookmakers will settle on the decision as per ring announcement, irrespective of subsequent appeals, bouts that are abandoned will result in void bets (although in some instances will stand if the contest is rescheduled within a specific timeframe – check bookie if it happens) and fights ending between rounds are classed to have ended in the preceding round.

The same rules apply as with any sport – do your research and study details others may miss in order to look for the value. Because UFC and MMA are still relatively new sports, especially in terms of being gambled on, it is quite easy for a canny punter to match and even better the knowledge of many of the bookmakers. By watching as many fights as possible and reading the best of the various blogs about the sports you can gain an insight into the different styles of fighters, their form and confidence.

How different fighting styles match up can be a big influence in UFC results and so a thorough knowledge of the sport is sure to help you spot an underdog who may offer great value if their method of fighting is likely to be effective against an opponent normally assumed to be the better of the two.

It is also very important to be aware that due to the explosive nature of the sport, upsets can and do happen. Knowing the power and knockout potential of both opponents, as well as the strength of their chin and quality of their defensive skills is crucial, especially when betting on the method of victory markets.