This is normally the penultimate tournament on the European Tour before the season ending World Tour Championship and as a result it is the last chance for golfers to secure the points needed to make the final event in Dubai.

The course is designed by and named after Gary Player, who won a total of nine majors between 1959 and 1978 including three Open Championships and three Masters Tournaments.

Lee Westwood, Ernie Els, Nick Price and David Frost have all won this tournament a record three times, with Westwood the most recent of those, picking up victories in 2010, 2011 and 2018.

Gary Player Country Club has been hosting a selection of the world’s best golfers for years now. It is the sole venue for the Nedbank Golf Challenge which used to be a small field event for a select group of invitees. It was no surprise that the course has continued to impress an increasing number of golfers as the field grew to its current size of 78.

Although Sun City is at altitude which allows golf balls to fly further through the air, a certain amount of power is vital around the 7,831 yard, par 72 layout. Recent winners have utilised their power off the tee and taken advantage of the par fives en route to victory. The tricky rough that frames relatively narrow fairways ensures it’s not all about pure power off the tee though, whilst the most confident putters will have an advantage given the difficulty posed by the fast greens.

Gary Player Country Club is far from a one dimensional golf course. Winners will need to follow strong drives with excellent approach shots before ensuring they don’t get put off by the lightning fast greens. As recent renewals have shown, players who get it right can pull away from the field by quite a distance. Those who show early promise should be considered for anybody getting involved with each way betting.

About the Nedbank Golf Challenge

The Nedbank Golf Challenge has been an official European Tour event since 2013. The competition – which was known as the Million Dollar Challenge from 1981 to 1999 – takes place at the Gary Player Country Club in Sun City, South Africa, usually late in the year.

In 2016, the event replaced the BMW Masters as part of the European Tour Final Series before becoming a Rolex Series event in 2017 and 2018. Previously, it was part of South Africa’s Sunshine Tour.

Several big names have won this tournament over the years. The likes of Seve Ballesteros, Bernhard Langer, Nick Faldo and Colin Montgomerie – that is, four of the top five players on the all-time list of European Tour winners – have all triumphed in his South African event. The tournament has also had its fair share of home winners, including Ernie Els, Retief Goosen and Charl Schwartzel.

After tying on a score of 277, Miller and Ballesteros battled it out in a playoff. The American edged past the Spaniard at the ninth hole of the sudden-death playoff to become the first champion. As a result, Miller won half of the $1m prize money, a very tidy sum back in those days. 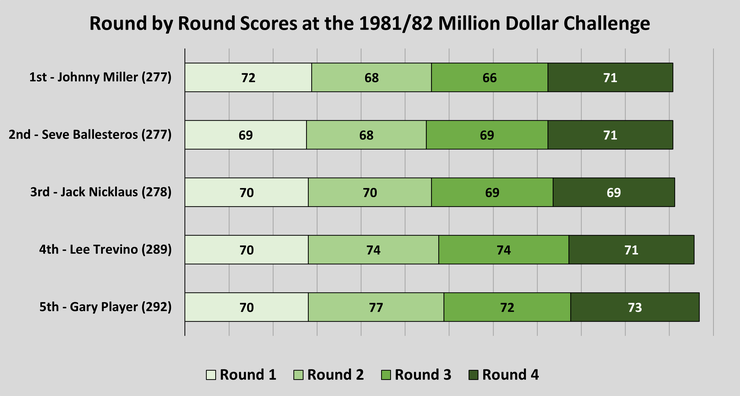 The South African supporters have seen several home players lift the trophy at Gary Player Country Club over the years. The first of those was Fulton Allem in 1988, with David Frost winning three of the next four.

It was then Ernie Els’ time to shine, as the Johannesburg man picked up victories in 1999, 2000 and 2002. Since then, home favourites Retief Goosen, Trevor Immelman and Branden Grace have all won the Nedbank Golf Challenge on South African grass. Els in particular shone in this event, managing 20 under par or better in each of his three victories. His best showing came in his first win in 1999 when he shot a quite astounding score of 263 to finish 25 under par and five shots ahead of second placed Colin Montgomerie.

In December 1987, Ian Woosnam became the first British winner of this tournament. The Welshman also won the Jersey Open, Madrid Open, Scottish Open and the Trophee Lancome in a stunning year on the European Tour in 1987.

Woosnam had a fine tournament on South African soil, going on to beat Nick Faldo by an impressive four strokes. Faldo was the next British winner, coming out on top seven years later in 1994. Those two and Colin Montgomerie were the only winners from Britain until Lee Westwood prevailed in 2010.

Westwood Makes it Three in 2018

David Frost became the first player to win this tournament on three occasions when the South African won on home soil in December 1992, following on from wins in 1989 and 1990. Zimbabwean Nick Price was the second man to win three (with victories in 1993, 1997 and 1998), quickly followed by Ernie Els.

Lee Westwood joined Frost, Price and Els on three victories when he beat Sergio Garcia by three strokes in 2018. Prior to that, the Nottinghamshire-born man had claimed back-to-back wins in 2010 and 2011. In 2010, Westwood became the first English winner of this tournament since Nick Faldo landed the victory in 1994.

Westwood’s first victory was a memorable one, as he finished eight strokes ahead of Tim Clark in Sun City. A year later in 2011, Lee beat Swede Robert Karlsson by two strokes. He was certainly peaking at around that time and came close to turning his fine form into a major title. Alas, it wasn’t to be and he could only manage 2nd in the Open Championship and tied second in the Masters in 2010 and tied third in the US Open in 2011.

If the 20 events that took place between (and including) the years of 2000 and 2019 there have been six winners decided by a playoff, two by a margin of just a single stroke, and four by two strokes.

At the other end of the spectrum, six tournaments have seen a victory by a margin of between six and nine shots.

The greatest winning margin in the history of the tournament occurred in 1993 when Nick Price earned his first win in the tournament with an impressive score of 264; at 24 under he was a full 12 shots ahead of countryman Mark McNulty who finished second.