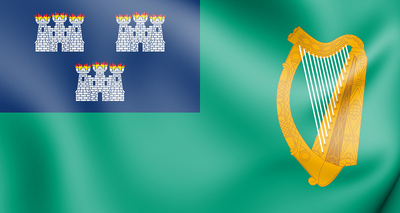 The Irish horse racing scene celebrates one of its newest members in the form of the Dublin Racing Festival. Whilst it’s only been around since 2018, the event now attracts tens of thousands or race goers from around Europe in what’s a mightily impressive display of racing.

The fact that the festival is held within the party city of Dublin has likely paid dividends in the popularity of the event. Even though it’s only been running for a short period of time, it includes 8 Grade 1 races over the two-day festival and with almost £2 million in prize money.

Whilst the festival in its current form is new, its actually an amalgamation of several meetings that were held throughout the months of January and February at the Leopardstown racetrack. The major races from these meetings have been merged into one to create a single “super meeting” instead.

The calibre of racing is second to none and would stand brilliantly on its own as one of the best weekends of racing in the calendar. But the Dublin Racing Festival is actually a very important part of the jumps season as it works as a vital pre-Cheltenham meeting. This allows trainers, jockeys and punters a first look at a host of horses that may run well at the Cheltenham Festival.

The first weekend in February brings one of Ireland’s biggest National Hunt meetings in the Dublin Racing Festival at Leopardstown. The Irish Gold Cup on Saturday and the Irish Champion Hurdle on Sunday are two huge races in their own right and also provide some major pointers for their Cheltenham equivalents the following month. 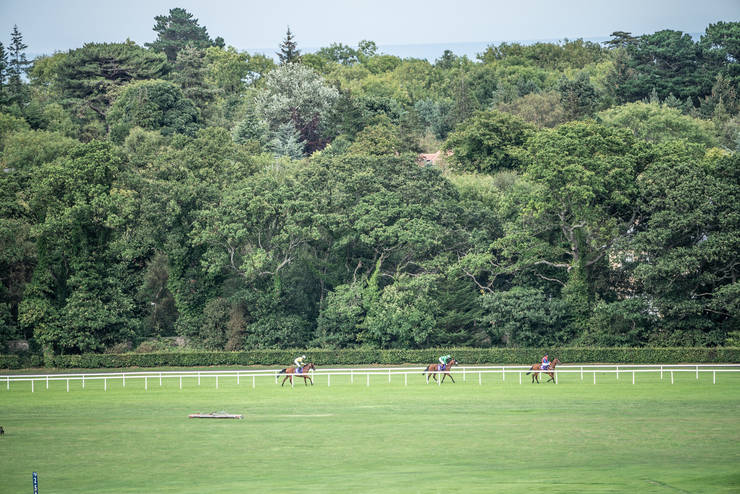 Leopardstown has been the backdrop to a host of memorable races over the years and the fact that it is situated just 8km south of Dublin’s city centre, means that it’s as much a tourist attraction as it is a racecourse.

The course is open all year round and is as well known for flat racing as it is National Hunt racing. They are able to boast Group and Graded races throughout the year and the volume of visitors seem to keep up come rain or shine.

Most Irish racecourses are usually modelled on successful racetracks from England, given that they are usually younger than their English counterparts. Leopardstown is no different and is actually a copy of the Sandown Park Racecourse. Racing on the site has been taking place since 1888 and the site enjoys around 22 meetings per year.

A unique feature for the track is that it includes a golf course and club house within the centre of the track. It also has shops, bars, restaurants, nightclubs, pubs and a host of snack areas to keep the punters entertained on race days. They’ve even hosted a number of bands at the venue such as The Human League, Johnny Marr and The Boomtown Rats.

As already stated, the festival takes place over two days, which are usually in the first weekend of February. In terms of prize money, well the figure keeps on rising as the stock of the festival keeps on increasing, reaching €2.075 million in 2022. 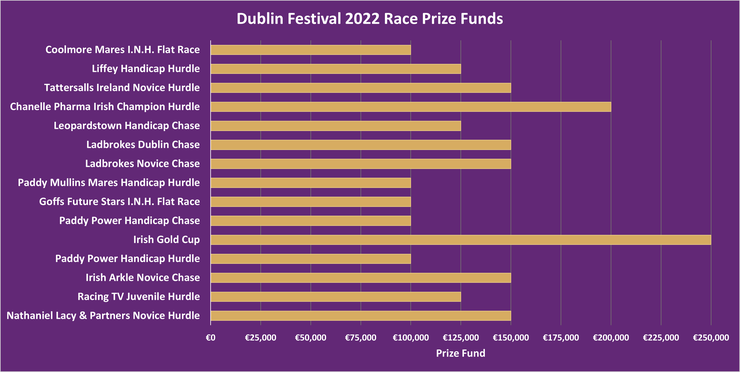 The festival is actually quite unique in that it has races on a Saturday and a Sunday and there are usually very few meetings that take place on a Sunday, especially high profile ones. The thinking was to move with the times a little more by organisers and take advantage of a weekend where more people and families can attend, rather than through the week, where people are often at work.

The second Grade 1 race at the festival comes in the form of the Spring Juvenile Hurdle. The race has been running since 1984 and with takes place over the 2 mile track. It’s restricted to 4 year old horse only and is a feeder for races such as the Triumph Hurdle at the Cheltenham Festival.

A race that is named after probably the greatest jumps racehorse of all time, the Arkle Chase provides another Grade 1 race at the festival. The race is famously named after Arkle who won it in 1963 when known as the Milltown Novice Chase, with legendary jockey Pat Taaffe on board.

The race now is run over a distance of 2 miles and 1½ furlongs and is open to horses aged 5 and up. It has got 11 fences and is targeted towards Novices. The race has been running since 1956 and is now linked to the Arkle Challenge Trophy that is run at Cheltenham. The most recent winner of both races is Footpad in 2018. Other notable winners include Douvan, Un de Sceaux, Kicking King and of course, Arkle himself.

The Irish Gold Cup is undoubtedly the highlight of the Festival. It’s got heavy links with that of the Cheltenham Gold Cup and three horses have won both in the same year; Jodami in 1993, Imperial Call in 1996 and Sizing John in 2017.

The race has been running since 1987, so it’s certainly not the oldest at the festival. The name of the race has changed quite often as well, going from the Vincent O’Brien Irish Gold Cup, to the Hennessey Gold Cup and then, as it failed to pick up a sponsor, has been named the Irish Gold Cup ever since. Recent sponsors are on board though they just have kept the name as is.

The Ladbrokes Novice Chase is one of the Grade 1 races on the final day of the festival and has been running since 1989. It’s one that includes horses aged five years and older and given its higher age tag for the race meeting, it means that it’s also one of the longest races at festival, run at 2 miles 5½ furlongs.

The race was upgraded from a Grade 2 to a Grade 1 in 2002. Even though the rating only increased then, it’s long been regarded as one of the best Novice Chases in Ireland and many quality horses have won previously, including Boston Bob, Florida Pearl and Dorans Pride.

The Champion Hurdle is a Grade 1 race that takes place on the second day of the Dublin Racing Festival. It’s been run since 1950 and is one of the oldest races at the meeting. It’s run over 2 miles and includes 8 fences to be jumped by the field that consists of horses aged 4 and older.

This has been won by some of the best hurdlers to have ever raced. These include the likes of Hurricane Fly, Sizing Europe, Brave Inca, Istabraq, Dawn Run and Faugheen, to name just a few.

This Novices Hurdle is another fascinating race at the festival and takes place as part of the Sunday celebrations. The race has been running since 1987 and is one of the older races that’s run on that day.

Given that the horses take on the 2 mile circuit at Leopardstown, it means that it works as a link to the Supreme Novices’ Hurdle that is run at Cheltenham Festival. In fact, winners of both races have include that of Danoli, Istabraq, Like-A-Butterfly, Brave Inca, Champagne Fever and Vautour.

Paul Carberry is the most successful jockey in the race with six wins in total and Willie Mullins is once again the top trainer, with ten wins. 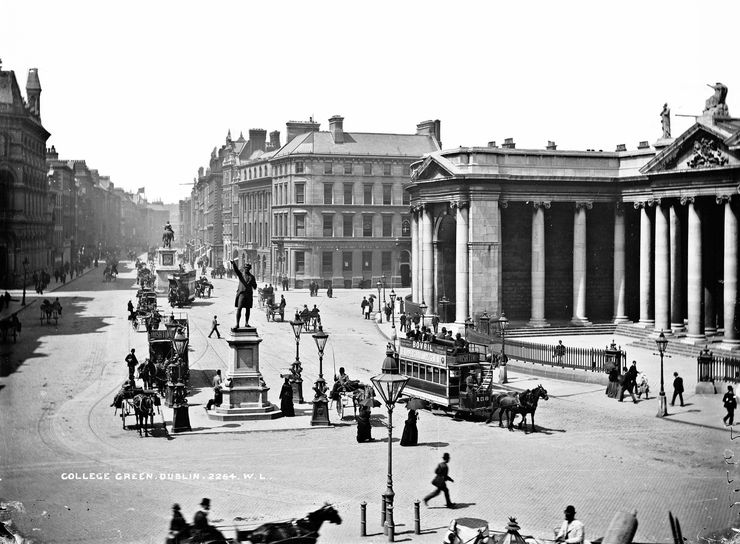 The racecourse was originally founded and then constructed by Captain George Quin in 1888. It was thought that Quin was a huge fan of the Sandown racecourse in England and then decided to create the course based on a blueprint of that layout.

It wasn’t until 1967 when the Horse Racing Board of Ireland bought the racecourse and really started to modernise it, something that had been neglected for many years. The layout of the track had left enough land for Captain Quin to create a golf course in the middle and this was something that the Horse Racing Board of Ireland were keen to keep on board, given how iconic it’s now become.

Another thing that the course is famed for is their relaxed attitude when it comes to dress code. They set the trend when it comes to what to wear and you’re able to get into the course wearing pretty much whatever you feel comfortable in, although they do encourage smart casual in the hospitality areas.

Florida Pearl is one Ireland’s most loved and also decorated race horses. He went on to win four Irish Gold Cups but interestingly was never able to carry this form over to the Cheltenham Gold Cup, despite running several times there. 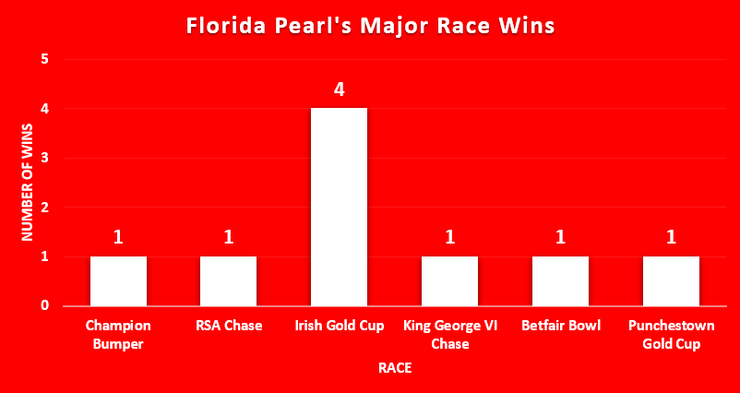 Training out of the Willie Mullins yard, Florida Pearl went on to win over £880,000 in prize money and won 16 from his 33 starts.

In terms of iconic and loved horses, they don’t get much bigger than that of Hurricane Fly. The Irish horse saw success around the world and as a result, managed to earn a staggering £1.88 million in prizemoney throughout his career.

There’s very little that he didn’t win over the years, but some of highlights have to include the Champion Hurdle, Punchestown Champion Hurdle, Prix de Longchamp Hurdle, Royal Bond Novice Hurdle and of course, his record five Irish Champion Hurdle victories on a course that he loved so much in Leopardstown. 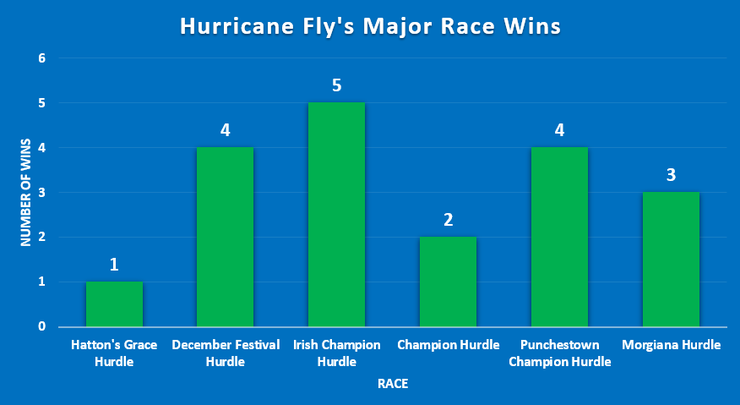