Newbury’s Mill Reef Stakes is a six furlong sprint for juvenile colts and fillies, held at the Berkshire track each September.

Established in 1972, the race is named in honour of one of the all-time greats, Mill Reef, who was trained by Ian Balding at his Kingsclere Park House Stables just ten miles south of the course.

The Mill Reef has been won by the likes of Harry Angel and Ribchester in recent years and this race can often provide a steppingstone towards future Group 1 success.

The 6f Mill Reef sprint starts around a furlong into the straight section which extends to the east of the course. This section joins the home straight at around the 5f mark in a dash to the winning post from left to right if viewed from the main grandstands.

About the Mill Reef Stakes: Young Stars Shine At Newbury

Most of the flat season’s major contests are in the record books by the time we reach September each year, as the thoughts of many turn to unearthing potential stars ahead of the following campaign. There are a number of high-class juvenile contests to assist in this regard, including this Group 2, six furlong event held at the Berkshire venue of Newbury.

Open to both male and female runners, the fillies in the field receive a three pound allowance from their male contemporaries, whilst there are also three pound penalties in place for those to have previously won at Group 1 or Group 2 level.

First run in 1972, when taking the place of a race known as the Crookham Stakes, the new title of the event honours one of the greatest flat racehorses of all time. A winner of twelve of his fourteen career starts, Mill Reef’s famous successes included triumphs in the Derby, the Eclipse, the King George VI and Queen Elizabeth Stakes and the Prix de l’Arc de Triomphe. With a CV like that he’s well worthy of having a race named in his honour.

A Classy Roll Of Honour

The race certainly got off to a flying start in terms of the quality of winner, with inaugural champion Mon Fils going on to land the following season’s 2,000 Guineas. Any thoughts that the race would then prove to be a reliable pointer towards future Classic success have however proved to be unfounded, with not a single winner since Mon Fils going on to land any of Britain’s five Classic contests. Forest Flowers’ win in the 1987 Irish 1,000 Guineas being the only other Classic success of any description.

The Classic’s aren’t the only quality contests on offer for the three year olds though, and a number of previous winners of this have gone on to prove themselves beyond their juvenile campaign.

Magic Of Life (1987) claimed the Coronation Stakes, whilst Zafeen (2002) and Excellent Art (2006) both stormed to St James’s Palace Stakes success. The classiest winner in recent times may well be Ribchester (2015) who landed the Jersey Stakes, the Lockinge Stakes, the Queen Anne Stakes and the Prix du Moulin during a highly productive three year old campaign. Undoubtedly the quickest of them all was the 2016 champ Harry Angel, who powered to July Cup and Haydock Sprint Cup glory as a three year old.

Ten different riders in all have landed this contest on more than one occasion, including a handful of the most famous jockeys to ever grace the track, as detailed in the chart below. 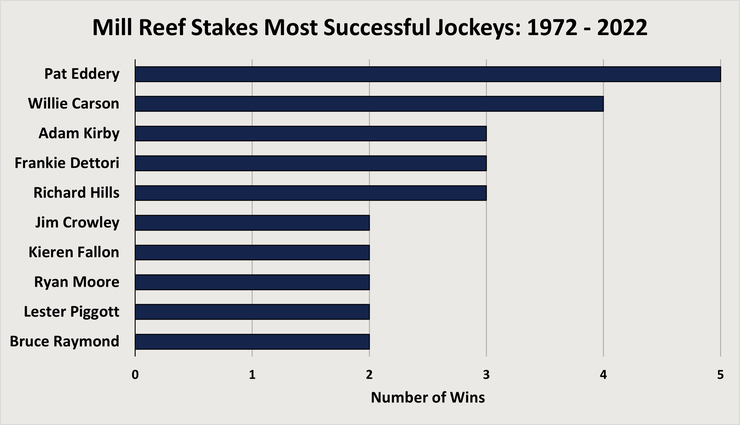 Top of the pile is the five-time winner of the race Pat Eddery. One of the true greats of the modern era, Eddery won the title of British Champion Jockey on a record-setting 11 occasions during his career.

Champions Tied For The Lead 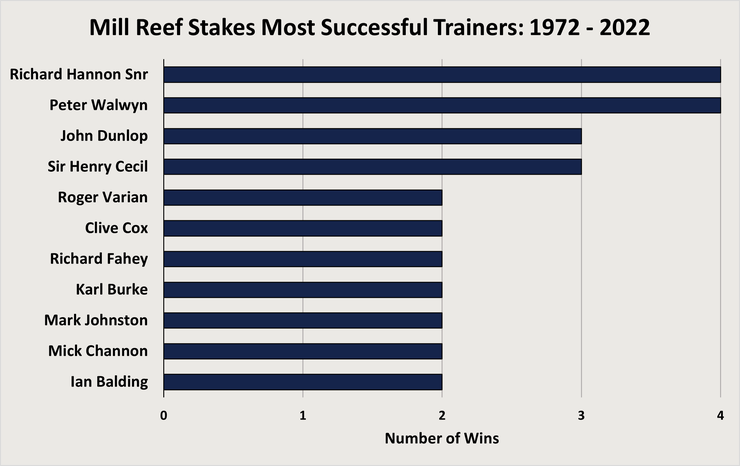 We have a pair of Classic winning former champion trainers leading the way in the standings here, in the shape of Peter Walwyn and Richard Hannon Senior who share top spot with four wins apiece. The likes of Ian Balding, John Dunlop and Sir Henry Cecil won’t be adding to their haul now, but Roger Varian, Clive Cox, Karl Burke, Mick Channon, Richard Fahey and Mark Johnston are all likely to have a few seasons left in them, and may yet threaten the lead. Mark Johnston in particular is a trainer renowned for success with his two year old runners.