The juvenile sprinters hog the spotlight at Newbury in July as they contest the Weatherbys Super Sprint.

The conditions of this race are a little different from the standard handicap affairs we are used to. With the weights being allocated according to the price paid for each horse, it is not necessarily the best horse which carries the most weight here, merely the most expensive.

The race is relatively young in racing terms, running for the first time in 1991. The idea for the contest was developed by the late Lord Carnarvon, who was racing manager to the Queen, and former Trainer Richard Hannon Senior.

5f is the trip for this Class 2 contest which offers total prize money of £150,000 this year. The going at the track is currently described as good and with decent weather forecast that could even dry out a little more come race day.

Due to the excellent prize money on offer, this contest is invariably one of the most targeted of the season for connections of the speedy two year olds. It is also one of the more unique big races on the racing calendar, in that the weights carried are determined by the prices paid for the contenders rather than their official ratings – the more expensive the horse, the more weight they carry.

Richard Hannon Snr is way out in front as the most successful trainer in the race having racked up seven successes during his career. He is of course now retired, but his son Richard Hannon Jr, has carried on the family tradition, and already boasts two wins of his own. The Hannons clearly know just what it takes to land this one and, holding four entries this year, Hannon Jr looks to have solid claims of moving another step closer to his father’s record.

Considering this race invariably sees a maximum field of 25 go to post, the favourites actually have a pretty decent record here, with three of the past 10 editions being won by either the favourite or joint favourite, rewarding supporters of the market leader with a level stakes profit of £1.75. Where should your money be going this year? Well, there are a few options that have piqued our interest.

One of the runners proving most popular in the betting ahead of this year’s renewal is the Clive Cox-trained, Get It. One major reason for this support is likely to be the fact that he is the top rated runner in the field, having been handed a mark of 93 ahead of this, but due to the race conditions he is only seventh highest in the weights. That clearly gives him an excellent chance from a handicapping perspective, particularly as he hails from a yard which does tend to do well with sprinters.

That rating of 93 also looks to be a fairly solid one, as despite not winning in his two starts to date, he has performed admirably in defeat. Having only gone down narrowly on debut in a Novice event at Newmarket, he was then stepped right up in class for his second start in the Listed Windsor Castle Stakes at Royal Ascot.

The Twilight Son colt ran a cracker that day to fill fourth spot behind Tactical, who has since gone on to land the Group 2 July Stakes. Get It is a fairly short price for such a big field, but does look to boast solid claims and is undoubtedly worthy of his place at the head of the market.

Given the record of the Hannons in the race, it would be unwise to underestimate the claims of anything hailing from the Wiltshire operation. Heading up Richard Hannon Jnr’s quartet of entries this year is the Dandy Man filly, Happy Romance, who – being rated only 1lb below Get It, but receiving 4lbs under the conditions of the race - is actually better in at the weights than the Cox runner, and the one they all have to beat on the ratings.

Unlike Get It, Happy Romance does already have a win to her name, having broken her duck at the second time of asking in a Sandown maiden. However, it is her effort in defeat in the Queen Mary Stakes at Royal Ascot last time out which makes her stand out here.

Showing excellent pace throughout that day, she only faded slightly close home to fill fifth spot behind the talented US raider, Campanelle. Stepping down from a Group 2 to Class 2, anything close to that level of form will put her in with a big shout here.

Another runner to catch the eye from towards the foot of the weights and the head of the market is the Michael Bell-trained, Lullaby Moon. A 16,000 Guineas purchase, this daughter of Belardo is set to carry only 8st3lb, which could be a strong factor in her favour considering each of the past four winners have been saddled with 8st7lb or less. She has also already shown a good level of ability at the track.

Raced just the once to date, she made an extremely favourable impression in that debut outing at Goodwood, when proving much too good for her rivals in registering a 2¼l success. It is tough to assess the strength of that form at this stage, but the third from that has at least gone on to win since.

Lullaby Moon both travelled and quickened well that day which augurs well for her chances here, with speed in the closing stages being one of the keys to success. Harry Bentley takes the ride and she looks set to go well for those wanting a slightly longer odds option than the two likely to be battling it out for favouritism.

About the Weatherbys Super Sprint: Pounds (lbs) For Pounds (£)

There are many top flat handicaps throughout the summer months, but not too many quite like this juvenile contest held at Newbury in July. Limited to two year olds only, this five furlong sprint affair is one of the most valuable events of its type of the season, offering a not inconsiderable £250,000 (as of 2019) in total prize money.

There is nothing unique in a five furlong handicap restricted to juveniles, but what is fairly novel with this race is the manner in which the weights to be carried by the contenders are assigned. Unlike in a standard handicap – where the weights carried are determined by the runners’ official ratings – in this race the burden to be shouldered is directly related to the price paid for each of runners.

Open only to horses who fetched less than a specified amount at public auction (£63,000 in 2019), weight is deducted in line with the price paid: the more expensive the horse, the more weight they will carry. A runner purchased for the maximum £63,000 will carry top weight of 9st3lb, with a pound in weight being deducted for every £5,000 below this maximum value. So for example a runner costing £53,000 would carry 9st1lb. In common with many other events of this type, any fillies in the field also receive a five pound allowance from the males. 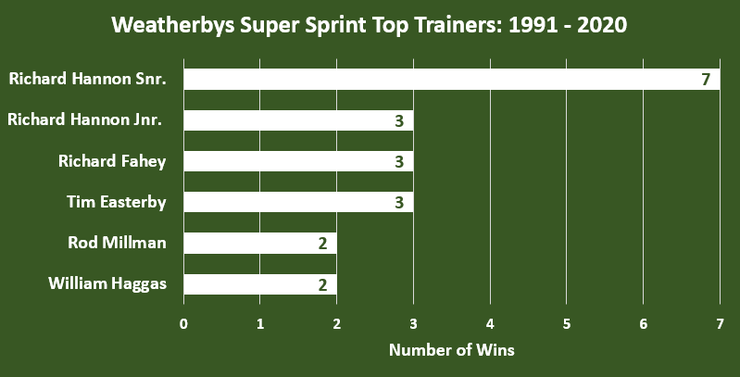 This race is a relative newcomer to the scene in racing terms, having first been run in 1991. However it hasn’t taken long for a number of trainers to rack up a pretty impressive record in the event. None more so than the now retired Richard Hannon Senior, whose seven wins between the years of 1993 and 2009 put him way out in front at the head of the table of top trainers.

Hot on his heels though is a certain Richard Hannon Junior, as whatever Richard Hannon Snr. knew about lining a runner up for success in this race, he seems to have passed on to his son. Hannon Jnr, Tim Easterby and Richard Fahey boast the best records of the current handlers, with three wins apiece as of 2020.

Hannon Duo The Pick Of The Bunch

Whilst this contest is really designed to give the smaller owners and cheaper horses a realistic shot at landing a big pot, that doesn’t mean winners of the event can’t go on to make their presence felt at a much higher level.

The pick of the Richard Hannon Snr. septet to have come home in front was undoubtedly his first ever winner of the race, 1992 champ Lyric Fantasy. A winner of six of her 10 career starts, her career highlight came when becoming the first horse to ever win the Group 1 Nunthorpe Stakes at York as a two year old.

The best winner of them all though was the Richard Hannon Jnr.-trained Tiggy Wiggy who scorched the turf on route to a six length rout here in 2014. Having already scored at Listed level at the time of that success, she then went on to prove even better than that with a win in the Group 2 Lowther Stakes, before success in the Group 1 Cheveley Park Stakes cemented her status as the Cartier Champion Two Year Old Filly for 2014.