The first Saturday in June each year can mean only one thing for racing fans, as Epsom Downs plays host to what is just about the most eagerly anticipated flat race of the entire season.

The eyes of the racing world will of course be on the Derby, but it takes more than one race to make a quality card, and the pick of the supporting action is this pedal-to-the-metal five furlong sprint handicap.

The Epsom Dash is a straight five furlongs which begins in a section just off the home straight with runners thundering past the stands towards the winning post.

About the Epsom Dash: Blink and You Miss It on the Downs

The Epsom Dash is a handicap horse race which is run on the flat at Epsom Downs in Surrey. This particular race is seen as one of the fastest horse races in the entire world. The reasoning behind this is that almost all of the five furlongs of the race are downhill, all except for the final 100 yards. This hotly contested and prestigious race also holds the current world record for a five furlong sprint, which is 53.69 seconds, and was achieved by Stone Of Folca in 2012. It really is a blink-and-you-miss-it event.

The race was first run in 1988 when the winner was Durham Place, who ran the distance in a rather speedy 55.59 seconds. The race was originally known as the Night Rider Handicap until 1993, when it became known as the Epsom Dash. In 2021 the World Pool lent its name to the race as the World Pool ‘Dash’ Handicap, replacing the long standing sponsorship of this race and the meeting by Investec, with Simpex Express backing the latest renewal in 2022.

Being one of the most high profile five furlong events to take place in the racing calendar means that only the absolute best in the world of horse racing’s speedsters have a chance of achieving success in the Dash. The honours list includes the late David ‘Dandy’ Nicholls as the all-time record holding trainer with five wins from 1997, when winning with Ya Malak, to 2009 when Indian Trail claimed first place.

As for the best jockey in terms of winners of the Epsom Dash, it is the retired Robert Winston who leads the way with three wins (in 2001, 2004 and 2016). Jimmy Fortune is the only other jockey to have won the race more than once. This is surely a testament to how competitive the affair tends to be.

When looking at the recent winners of this race there are certain conclusions punters should be able to draw. First of all you need to forget considering your selection by price; in the 13 races up to 2022 alone there were two 33/1s runners, two 25/1 options and a 50/1 shot (Stone Of Folca in 2012) who were all successful. Therefore, choosing a shorter priced horse based solely on thinking that a 20/1 shot cannot romp home just isn’t the right choice for this event. 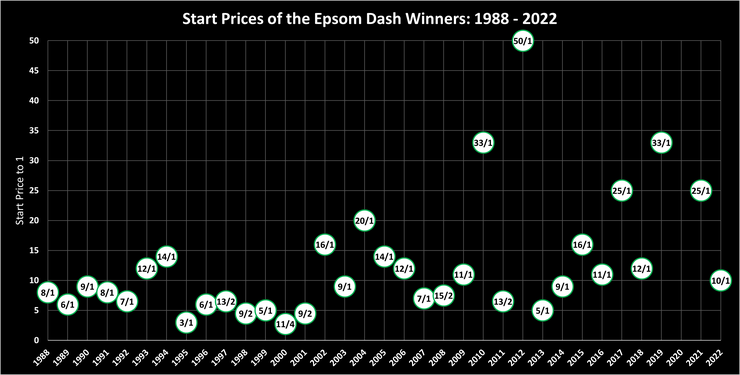